You are here: Home / Baseball / 2014 Baseball Hall Of Fame Goes Down As One Of The Most Iconic In History 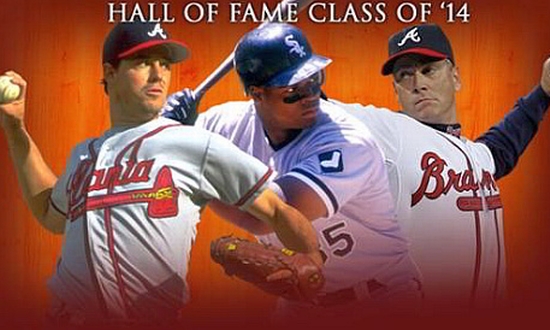 The small town of Cooperstown, NY was in for a special treat once again with this year’s Hall of Fame inductees. I’m extremely appreciative of the fact that I was there to witness this induction ceremony. The class of Joe Torre, Frank Thomas, Tony La Russa, Bobby Cox, Tom Glavine and Greg Maddux featured a lineup of dominance.

Maddux and Glavine each won over 300 games in their career and both were managed by Bobby Cox in Atlanta. La Russa made a stellar career as a manager with the White Sox, Athletics and Cardinals. Frank Thomas made himself an icon in the city of Chicago by playing 16 seasons in for the White Sox. Joe Torre made a name for himself by winning four World Series with the New York Yankees. He also managed the Mets, Braves and Cardinals.

The trio of Glavine, Maddux, and Cox helped spark an era of dominance for the Braves in the 1990s that resulted in 14 straight division titles. Maddux had 17 straight seasons in which he won at least 15 games or more. He put the ball in the strike zone with no problem and staying healthy was a major factor in that streak. Glavine had five seasons of 20 or more wins. Cox, Maddux and Glavine also won the World Series in 1995.

I was inspired by Frank Thomas’ speech during the ceremony. His passion and emotion brought tears to the crowd and the love he had for the city of Chicago was impeccable. I’m always impressed when an athlete is able to stay with one team for the majority of their career. He had five seasons of 40 plus home runs and four others of 30 or more. Thomas was a five-time all-star and two-time AL MVP. He had 521 career home runs. Thomas also played for the A’s and the Blue Jays. Thomas’ 500th home run was hit with Toronto.

The dominance of managers in this hall of fame class surprised me. 2014 featured arguably three of the top five managers of all time. Cox and Torre dominated in Atlanta and New York and each of them respectively became icons in each of those cities. While Cox had the privilege of managing the likes of Chipper Jones, Tom Glavine and Greg Maddux–Torre also managed greats such as Derek Jeter and Mariano Rivera. Torre even defeated Cox in the 1996 World Series. Torre hit 252 home runs as a player.

Tony La Russa won 2,728 games which consisted of 10 seasons with the White Sox, 10 with the Athletics and 16 with the Cardinals. He won the World Series in Oakland once and twice in St. Louis. 33 seasons as a manager is an impressive feat to me and his 100% vote into the hall of fame is no surprise to me.

The 2014 baseball hall of fame ceremony had one of the deepest classes in history and each player/manager was well deserved in being one of the 306 individuals inducted in Cooperstown. The White Sox, Athletics and Braves organizations dominated the show by having their talent recognized as one of the best.

Witnessing this induction ceremony is an amazing experience and I urge every huge baseball fan to make this apart of their bucket list.