You are here: Home / Football / A Change in Washington? 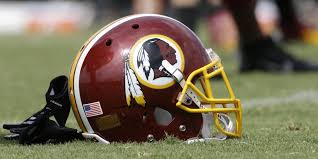 Teams have been scrutinized for years about their names involving Native Americans, but nobody has seen more controversy than the Washington Redskins. Daniel Snyder, owner of the franchise, has been in a constant battle with Native American groups and members of Congress.  The writing seems to be on the wall now as a huge step is being taken that could lead to an end of the controversial name.

The  Trademark Trial and Appeals board has ended the trademark associated with the name and the logo of the franchise. The question that needs to be answered is what does this mean for Washington? It may not mean a direct end to the name but it could possibly lead to a change people have been seeking for years.

If the ruling is upheld, then merchandisers will be able to sell Redskins gear without having to pay a royalty to the organization.  The Redskins faced a similar situation like this before in 1992 and managed to prevail.  With all that is going on, it is hard to see a judge agreeing with Snyder’s stance on the subject.

The big problem now is that the appeal is going to take some time to work out in court.  These types of cases are not ones where a decision comes swiftly. While the appeal process is happening, royalties will still have to be paid.

The name is one that has needed to be changed for a long time and we finally have something that can lead to a decision for a more suitable title.  If this ruling is upheld, Snyder will be backed into a corner and hopefully will have to comply with the call to change that he’s managed to avoid for years. He  is stubborn and will not change his beliefs even if forced to do so by legal action.

It is time to get racism out of sports all together.

No matter what race of people are being offended (directly or otherwise) there is no room for it anywhere.  The NBA got a belated start on that by finally trying to remove Donald Sterling as an owner.  The day needs to come where we can just talk about the good in sports and the good they do instead of talking about the injustices of society found within them.

This change needs to happen for the betterment of everyone. This is the beginning of the end for the Washington Redskins name and it is about time.