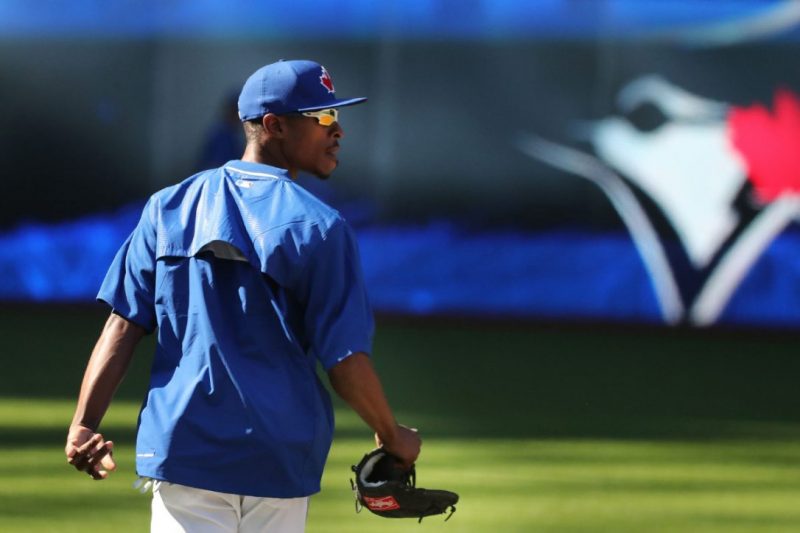 We review the deals made at the deadline in the AL East and grade each team on how well they did in setting themselves up for the future.

Here’s a riddle for you. When is adding a starter pitcher with an ERA floating around 5.00 a good thing? The answer: When he replaces a pitcher with an ERA over 7.00. So while Wade Miley does not bring excitement with him at least he boots Ubaldo Jimenez in the Orioles rotation. As we mentioned in our AL East trade preview, Baltimore desperately needed another starter but had very little to offer teams in return. To acquire Miley the O’s sent Cuban import LHP Ariel Miranda to Seattle. The 27 year old was having a respectable season in AAA but does not have a huge upside. From the Mariners perspective, the biggest part of the deal was shedding Miley’s 2017 salary of nearly $9 million dollars.

Baltimore also brought back utility player Steve Pearce for a fringe prospect (catcher Jonah Heim). Combined these two deals are helpful, although only marginally for the O’s playoff run.

The Red Sox took care of most of their deadline business well before August 1st. They set off their game plan on July 8th when they grabbed Aaron Hill from Milwaukee. Within the next 7 days they also scooped up Arizona closer Brad Ziegler and Starter Drew Pomeranz from San Diego. The key acquisition was Pomeranz who is under team control for the next 3 seasons. While the former top prospect had pitched like an ace for the 1st half of the season for the Padres, his 1st three starts for Boston have been disappointing. The Red Sox do not need him to lead the rotation, that is David Price‘s job, but he is expected to stabilize the back end. Boston also added to their bullpen by trading for LHP Fernando Abad.

The Red Sox sacrificed quiet a bit of young talent (including  potential star RHP Anderson Espinoza) for role players. Nevertheless, the Red Sox made sure to hold onto all of their top nearly MLB ready prospects. At the trade deadline most teams must decide whether to play for now or later. Boston decided to try to do both. The team added role players to support their strong major league team, while holding on to their next generation of stars. It remains to be seen if that will bring a championship to Boston, but they will be highly competitive in 2016 and beyond.

The Jays were among the most active teams during the deadline. They clearly had two agendas: to add pitching and to acquire players that will help the team beyond just this season. It was a mission unlikely to succeed considering that they had very few trade assets.

The Blue Jays obtained some good name value, including former All Star LHP Francisco Liriano and OF Melvin Upton Jr. Unfortunately both players have not lived up to their fame in recent action. After 3 dominant seasons for Pittsburgh, Liriano has been a train wreck in 2016 going 6-11 with a 5.46 ERA. The Pirates actually included two decent prospects to rid themselves of the lefty. Meanwhile Upton is having a “resurgent” season yet his On Base Percentage is barely over .300. Combined the two are owed  over $30 million dollars in 2017. Toronto also added RHP Mike Bolsinger and RHP Scott Feldman. Both profile as back end starters or long men in the bullpen.

An optimist would point out that Toronto scooped up established talent for virtually nothing in return. However in reality the Jays added fallen stars who are still owed a considerable amount of money. If those players don’t return to form the Jays frenzied activity will prove to be a waste of time.

This is not your father’s Yankees. Or to be more exact this is not Hal Steinbrenner’s father’s Yankees. For the first time in a generation the Pinstripers became sellers at the deadline. For a team that isn’t accustomed to doing such things, they certainly did well for themselves.

The list of prospects is impressive led by four gems: OF Clint Frazier, LHP Justus Sheffield, SS Gleyber Torres and RHP Dillon Tate. Mlb.com ranked Frazier (22), Torres (24) and Sheffield (93) in their top 100 prospects in a mid-season report. Tate has struggled so far this season but certainly has an arm worthy of a top 100 ranking in his own right. But the best part of this awesome gathering of youth is that they were obtained while only losing one player who would’ve been a Yankee in 2017 (reliever Andrew Miller). The other trade chips (Aroldis Chapman, Carlos Beltran, and Ivan Nova) will all be free agents at the end of the year.

While the trades themselves were definitely “A” level material, a view of the bigger picture suggests the team is going in several directions at once. What exactly is this team’s new identity? If they are rebuilding, or now being fiscally responsible, then New York really should’ve tried to move some of their high-priced talent. If they are simply retooling, then they did not address many of their concerns for 2017. And the trading of Andrew Miller is problematic. Of course one could argue that the Yankees gathered these prospects to use as trade pieces for next season. If that’s the case then the trade deadline grade should be scored “incomplete”.

The Yankees seem half way down the road of two separate journeys. Until one defined path is chosen their future, as well as their present remains in doubt.

The Rays turned free agent to be Steve Pearce and soon to be arbitration eligible Brandon Guyer into three second-tier prospects. None of which look to make major impacts for the major league squad. Tampa also sent starter Matt Moore to San Francisco for a solid package: Injured INF Matt Duffy, SS prospect Lucius Fox and RHP prospect Michael Santos. The speedy Fox and Santos are both projects with high upsides. Tampa will be patient with them and hope they can reach their maximum potential in the years to come.

Perhaps the best thing the Rays did at the deadline is hold onto their ace Chris Archer. He was rumored to be on the move but Tampa did not find any offers satisfying enough. Despite Archer’s struggles this year, he’s still extremely talented and has a team-friendly contract making him the perfect anchor to the Rays pitching staff.