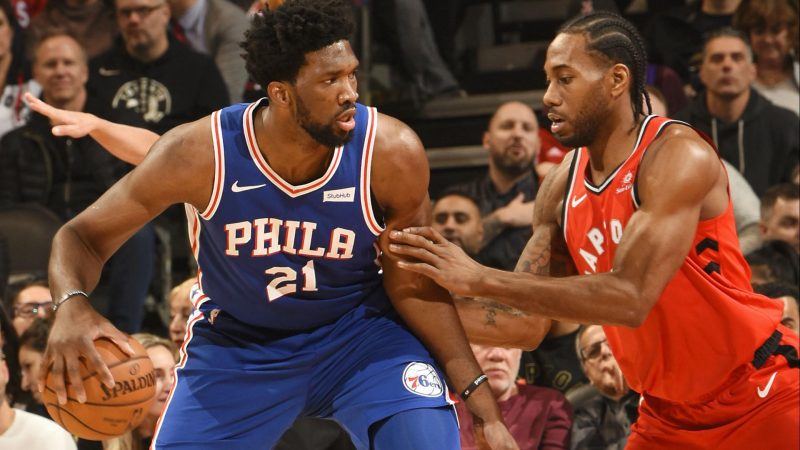 A bland first-round in the Eastern Conference left much to be desired in the eyes of many NBA fans. A wildly unpredictable Jared Dudley–Ben Simmons feud was the only entertaining storyline in the first four playoff series’, which all ended in five games or less.

It was nearly certain coming into the postseason that the top four seeds would handle their business and advance. Now that the inferior teams in the conference have been discarded, the true battle for the East begins.

The Toronto Raptors and Philadelphia 76ers tip off their series Saturday in Toronto. Both teams have the talent to make a Finals run, but one will be sent packing earlier than anticipated. Toronto went 3-1 against the Sixers in the regular season, but not much stock should be placed on the previous matchups this year.

Both Toronto and Philadelphia were huge buyers at the trade deadline once their season series had already concluded. Toronto acquired Marc Gasol from the Memphis Grizzlies and Philadelphia poached Tobias Harris from the Los Angeles Clippers before the deadline, and the teams haven’t faced each other yet with their current rosters. Feb. 5 was the last game between the two, and the Sixers started Mike Muscala and Landry Shamet, both of whom are now in Los Angeles. Greg Monroe played 18 minutes for Toronto and contributed 10 points and seven rebounds in a 119-107 win for the Raptors. He’ll be sitting on the opposite bench for the next few weeks.

Even with the roster shuffling both teams went through at the deadline, the Raptors still have a distinct advantage going into the series. Home court advantage should play a significant role, as both teams excel at home. Toronto went 32-9 at home during the regular season and Philadelphia went 31-10, both top-five marks in the league. However, Philadelphia struggles on the road. The Sixers went 20-21 away from the Wells Fargo Center this season. They will need to steal one at Scotiabank Arena to have a chance in this series, something they haven’t done since 2012.

Kawhi Leonard has flourished against the Sixers this year, averaging 30.3 points, 7.7 rebounds and 4.0 steals per game. Leonard has never lost a game to the 76ers in his entire career, going 13-0 with the Spurs and Raptors. The only game Philadelphia won this year was without Leonard in the lineup. Aside from his offensive prowess, Leonard might be the most frustrating defender for Simmons in the entire league. In his first-ever game against the former NBA Defensive Player of the Year, Simmons coughed up a career-high 11 turnovers earlier this season. Simmons averaged 8 turnovers per game against the Raptors in the games Leonard played. He committed just one turnover in the game Leonard sat out. The Sixers won that contest by 25. Leonard’s ability to force Simmons into mistakes could be the deciding factor in this series.

The other matchup that can swing the result from game to game will be the battle between Gasol and Embiid. Gasol’s presence in the paint has turned Toronto in to an elite defensive squad. Since the All-Star break, the Raptors rank third in defensive efficiency. In their first-round series the Raptors held the Orlando Magic to 92 points per game. Nikola Vucevic, who led the Magic in scoring at 20.8 points per game this year, was limited to 11.2 points per game on 36.2 percent shooting. In the five previous head-to-head contests between Gasol and Embiid, Embiid was held to just 14 points per game on 34.4 percent shooting. Gasol is proving this year he is still an elite defensive center. Embiid is a tougher challenge than Vucevic presented in round one, but Gasol can make it tough on the 7-footer who still isn’t 100 percent coming into the series.

Toronto has a distinct advantage in terms of depth, defensive efficiency, and three-point shooting. If Philadelphia’s stars don’t play to their full potential, the Raptors will move on the Eastern Conference Finals easily. For the Sixers, it’s as simple and Simmons and Embiid and how they fare in their respective matchups. If Simmons can take care of the ball against Leonard and Embiid can score efficiently on Gasol, the Sixers have a chance to pull the upset. If the duo plays as poorly as they did in last year’s second round performance, this one might not last more than five games.

Either way, it will be a fascinating series with intriguing matchups all over the floor and high stakes for both franchises that have NBA Finals aspirations. If this best-of-seven tilt can even come close to the Allen Iverson–Vince Carter clash in 2001, it could be the most fun second-round series in the 2019 NBA playoffs.