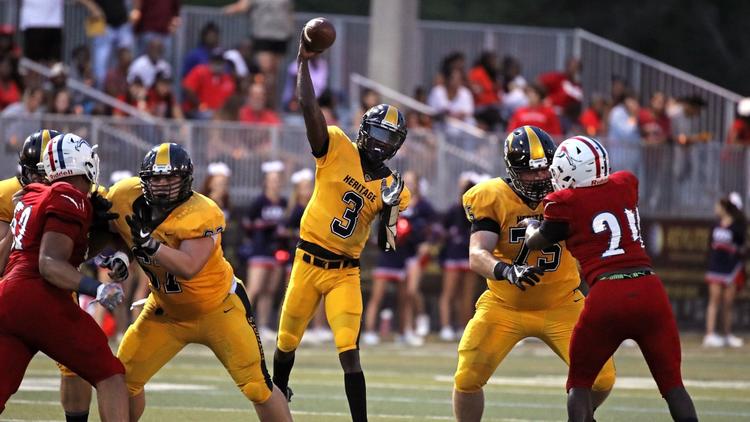 Dual threat senior quarterback Cameron Smith lead American Heritage (Plantation, FL) to victory scoring four touchdowns in the dominating 41-13 win over Chaminade-Madonna (Hollywood, FL). The game was televised on ESPNU Friday night in Plantation adding positive exposure for Heritage and embarrassment for Chaminade. The Patriots were ranked 3rd in the state according to MaxPreps and they owned the 25th ranked team from the first whistle.

Pats jumped out to a 20 point lead in the first quarter and never looked back. Chaminade quarterback Thaddius Franklin fumbled on their first play from scrimmage and Heritage seized the ball and momentum from that moment forward. Smith, with a cannon for an arm, found Josh Alexander in the corner of the end zone for their first score less than two minutes into the game. The Patriot defense forced consecutive three and outs and capitalized with touchdown rushes from Jordan Johnson and Tyler Jones.

“I thought we played very well,” said Head Coach Pat Surtain. “We feel we have the best defense in the country. We want to play great championship defense every week.”

Quinn Dempsey was inserted at quarterback in the second quarter and was able to lead a drive for the Lions first score. Franklin actually ran in the score from 9 yards to give the away team hope and reduce the lead 20-6.

Cameron then found Anthony Schwartz, the receiver with the fastest time in the state in the 100 meters, on their next drive near the side line and he blazed into the end zone. On their following possession, Cam excited the home crowd with an impressive 30-yard run to get his team to the one yard line leaping over a defender. He would then punch it in with the next play giving Heritage a 34-6 lead into the half. Cam’s last play of the game came on their first drive of the second half. Smith would find Schwartz again, this time on a bubble screen that the speedster would take to the house for 70 yards.

“He is really coming into his own,” commented Coach Surtain on his quarterback. “I tell him all the time that a five yard pass can turn into a 60 yard pass. Just get it in your guys hands and they will make plays for you. This game he really took it to another level and if we can get that out of Cam, because he has such a big arm, if he can get the ball to our playmakers and couple that with our running game, we are going to be a very dangerous team and hard to beat.”

Due to Hurricane Irma, South Florida teams did not play in the previous two weeks. American Heritage now goes into a bye week while Chaminade-Madonna will look to bounce back against Piper (Sunrise, FL) next week.