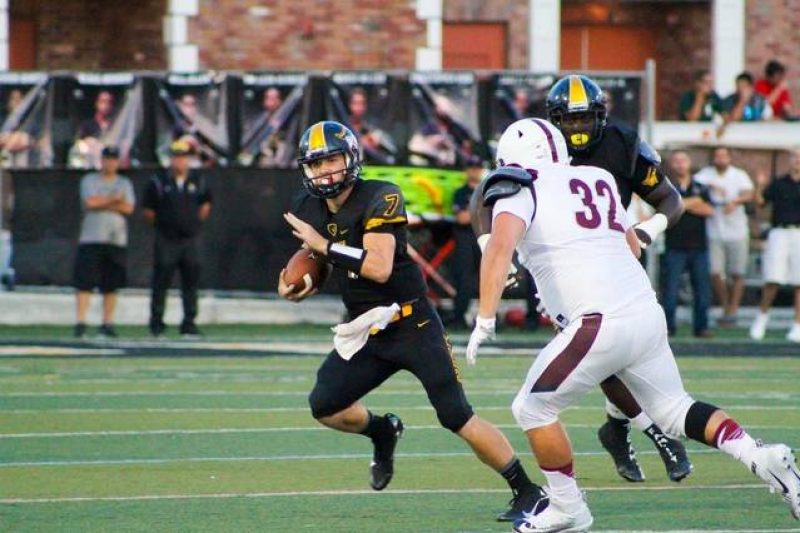 Former Pro Bowl Miami Dolphin, Patrick Surtain, now head coach of the American Heritage Patriots led his team to an impressive victory over the perennial power Don Bosco Ironmen from New Jersey. This game between two private schools was a defensive battle with American Heritage making enough big plays in the running game  and on defense to win.

“Really great job by the defense to get a shutout,” Surtain said. “That is a really good team and they are more than likely going to win the state championship in New Jersey.”

Heritage’s quarterback Jason Brown broke through on the scoreboard with a 48-yard touchdown run on a zone read play. After faking the hand-off to his running back, Brown was able to scamper down the left sideline in route to the end zone at the 4:13 mark in the first quarter.

Don Bosco attempted to answer early in the second quarter and made it inside the 20 yard line. While in the red zone the Ironmen elected to go for the touchdown instead of a field goal on 4th down only to have the ball intercepted by Heritage’s Will Allen. Bosco’s next attempt to get on the board was on a 38-yard field goal which was blocked by the Heritage’s special teams with 4:37 in the 2nd quarter to keep the score tight at 7-0.

The Patriots looking to capitalize on the ensuing drive were also able to make it inside the red zone only to have a pass intercepted in the back of the end zone by Kevin Brennan with 59 seconds left before halftime. Despite the lack of offense the Patriots seemed confident heading into the break with the score and home field on their side.

Don Bosco drove down the field on its first possession of the second half well into Patriot’s territory with bruising runs by Elijah Thomas. The drive would again stall as result of another interception as Tommy DeVito was picked by Marco Wilson. Momentum took another big swing towards Heritage following the pick which was the second of three forced turnovers on the night.

The Heritage offense started to take control with the running game in the 3rd quarter with back-to-back jet sweeps. The first was a 37-yard run by Miles Jones on the left side. It was quickly followed by a 43-yard run to the right which Laress Nelson was able to take in for a touchdown to extend the lead to 14-0.

Heritage was able to to stifle yet another drive by Don Bosco after forcing a fumble which was recovered by Marco Wilson with 8:27 left to go in the game. The Patriots infused a heavy dose of running by Abraham Alce to milk the clock and seal the victory with a 8-yard touchdown run in the final minute.

“I really had faith in my lineman on that last drive,” said Alce. “I didn’t do much I give all thanks to my lineman. All I had to do was put my weight on them and that was it.”

Much like the New England Patriots, American Heritage went about the game with a workmanlike focus. This was the Patriots second regular season game of the season. Despite winning last week, many remember the embarrassing 27-7 defeat to nationally ranked Booker T. Washington in a preseason game two weeks ago. Heritage wants to put that drubbing fully in their rear view as they set forth on the rest of the season.

“It’s just one game and you have to move on,” said Alce. You have to forget about the past and work forward.

Don Bosco has won 15 state titles including a national title in 2009. They are the defending state title holders in New Jersey.