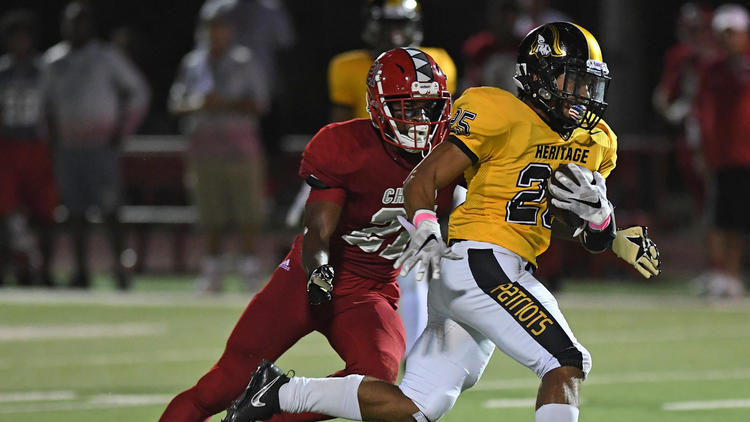 The number one team in South Florida, American Heritage, was able to get a key victory in securing the district title in a hard fought battle against Cardinal Gibbons. This was a back and forth affair throughout, but the Patriot defense and running attack of Johnson and Jones would prove to be the difference in the game that was broadcasted live on Facebook by the Miami Dolphins.

“Our defense stepped up in big time games with big time plays,” said Pat Surtain Jr. after the contest. “We’ve been through a lot of adversity and it showed.”

Gibbons was able to take advantage of turnovers early that would set them up with great field position. Evan Loescel penetrated the Heritage line and forced a fumble of quarterback Cameron Smith deep in Heritage territory that the Chiefs would recover. The drive stalled and Gibbons would settle for a field goal. On the ensuing kickoff, Vanderbilt commit, Miles Jones waited for his blockers to settle then took off for a 96 yard touchdown return. Later in the half, while receiving a punt, Gibbons coverage collided with Jones before he had a chance to catch the ball. No penalty was called and Gibbons took over again in the redzone. The Chiefs settled for another field goal to make it 7-6 at the half. Head Coach Pat Surtain was not happy with the non-call.

“We totally got hosed. The refs have a hard job to do but come on man. It’s a shame these people are incompetent.”

The Heritage running game would impose their will in the second half. Jordan Johnson scored on a three yard run and Tyler Jones broke into the open field shedding several tackles scoring from 23 yards that would ultimately prove to be the game winner with 3:52 left.

“We’re a second half team. Nobody can stop us in the second half,” said Surtain Jr. “[Tyler Jones] is an underrated one on this team. He’s a valuable asset to our team and we needed him.”

Gibbons quarterback Nik Scalzo attempted to bring his team back with a touchdown pass to Carlos Sandy and run of his own from three yards. The comeback would fall short as an onside kick attempt failed to travel 10 yards.

The undefeated Patriots rank fourth in the nation according to MaxPreps and continue to prove that they are one of the best teams in the country. Heritage takes on Miami Jackson next week at home. Gibbons suffered their first loss of the season but may see Heritage again in the district playoffs. They take on Hallandale next week.