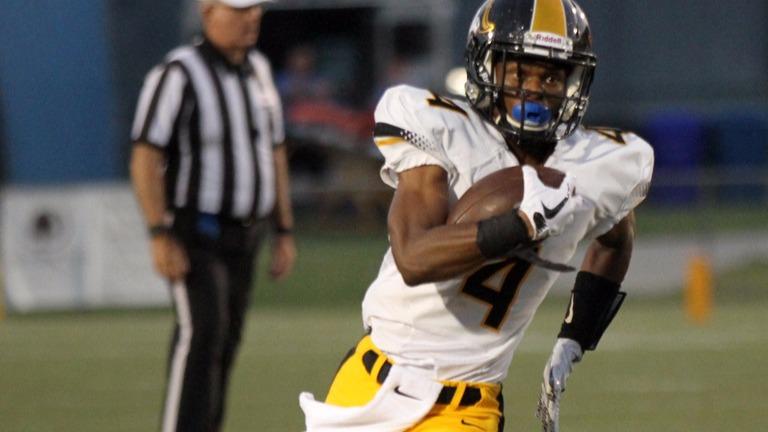 The Patriots from South Florida had no trouble with the Patriots from the west as American Heritage crushed Liberty 31-0 at home. Liberty, who’s team came in ranked 24th in the nation according to MaxPreps, could not get anything going offensively as they managed to get their first first down at the 2:15 mark in the 2nd quarter.

The uncommitted Chatfield and Miami commit Nesta Silvera seemed to be playing a game of meet at the quarterback all game. It was hard to determine who was winning this battle between the dynamic duo. Chatfield beat Silvera to the ball in the second quarter however, as he scooped up an attempted backward pass and blazed to the goal line for a score.

“Me and Nesta, we always compete and do our best on the field. I just saw that [the quarterback] threw it in the backfield and just thought well… it’s time to make a play.”

Starting Heritage running back Miles Jones started the assault early with slashing runs on their first drive. Jones would cap the drive with a two-yard touchdown run to put his team up early 7-0. This seemed like a trend that would continue throughout the muggy night until Jones was hurt while rushing into the redzone on their second drive. Heritage already playing without one of their stars, Pat Surtain Jr. because of a knee injury, would reiterate the ‘next man up’ philosophy.

“We had some players that were injured and some players falling off but we didn’t let that mess with us. We just came out there, played our game. When our teammates go down that’s not going to really affect us, it’s next man up like we always say.”

Highly touted cornerback Tyson Campbell stripped Maurice Hampton of the football in the second quarter. Following the turnover, Cameron Smith connected with Josh Alexander on a go route that would put Patriots South over Patriots West 14-0.

The next man up at running back was Tyler Jones who took the hand off on the first play of the second half 80 yards for a touchdown. Heritage would rest many of their starters for the duration of the game after that last score.

Despite a dominating performance coaches say Heritage has yet to play their best game. “We left a lot of points on the field and we won’t be able to that against Miramar,” said Head coach Pat Surtain. +

American Heritage will look to continue their dominating start with a home game against the Patriots of Miramar next week.