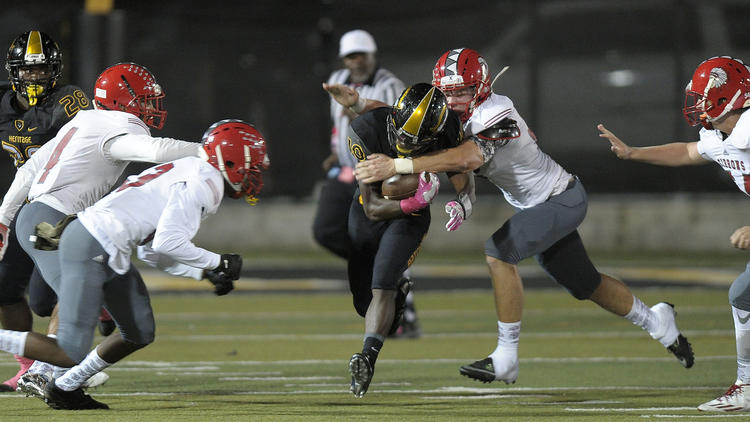 On a cool night at Heritage field in Plantation, FL, the home team earned a gritty 10-7 victory over Cardinal Gibbons. As a result, American Hertiage will advance to the 5A regional semifinals. The game was a rematch from an earlier game in the season for the district rivals. Every down in the game was played like it was each team’s last.

The Heritage Patriots were able to sustain two key drives that would ultimately push Cardinal Gibbons out of the postseason and keep Heritage’s championship hopes alive.

“When a team battles through like that it builds character,” said Head Coach Patrick Surtain.  “It’s hard to beat a team twice especially in your own district. These kids fought and that’s all you can ask for.  Just a huge win for us moving forward.”

The Patriot defense was able to shut out Gibbons by not allowing an offensive score.  The Chiefs closest attempt to get on the scoreboard offensively was halted by an impressive interception in the endzone by the coach’s son, Pat Surtain Jr., with 2:36 left in the first half.  The defense has consistently carried Heritage all year and this game was no different.

“That’s been our rock all year,” said Surtain.  “Defense wins championships.  To come out and shut these guys out, an explosive offense like Gibbons with the talent they have.  Kudos to those guys.  They work at their craft they practiced hard and it showed tonight.”

The first drive of the second half would stall for the chiefs.  Gibbons however would pin the Patriots on their own 2 yard line.  On their first play from the two, a shaky exchange would produce a fumble that would be recovered by Gibbons Defensive lineman Hunter Astle. Astle would emphatically spike the ball in the endzone as the team in red and white took the lead and seized momentum. After the play, Coach Surtain huddled his guys to keep them focused on what he has preaching to them all week.

“I talked to them all week about how we are going to encounter some adverse situations,” said the patriot head coach.  “They had all the momentum in the world and I said we are going to go back to Heritage football.”

With 9:05 left in the 4th quarter the Patriots were able to convert on the ground on a 4th down and 1 just outside the redzone in Chief territory.  The running game would carry them the rest of the way.  The combination of running back Miles Jones and quarterback Jason Brown would carry them into the endzone on a 1 yard run by Brown on the same drive.  Their next drive would milk the clock down to 49 seconds essentially leaving Gibbons out of time for a comeback.

“Our blueprint all year has been running the ball,” added Surtain.  “That’s where we beat teams.  We got back to doing what we do.  Our motto is to pound the ball down deep defenses throats and that’s what we did on those final two drives. I’m sure we will be able to play better next week”

Heritage looks to continue their championship run against Bishop Moore in Orlando next week.