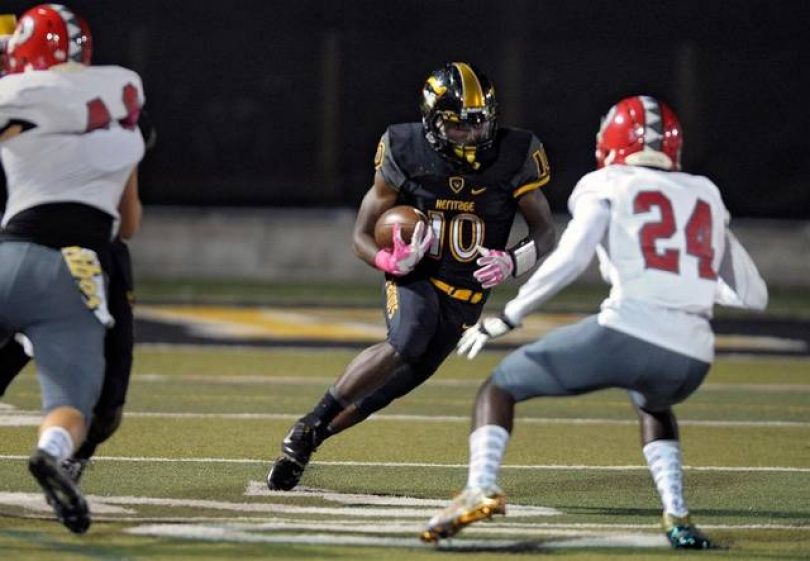 American Heritage (Plantation) makes its claim for the best team in all of Florida with an impressive win over local district power Cardinal Gibbons (Fort Lauderdale) 29-9. The Patriots held the Chiefs to only one offensive score and controlled the game throughout.

“We have a really good defense, I think we have the best defense in the country,” said running back Abraham Alce. “They come out there and show it every time.”

The Patriot defense have standout sons of former NFL players including Pat Surtain Jr. and Will Allen Jr. The only team that could beat the Patriots on this night…would have been the Tom Brady led Patriots out of New England.

Pink was constantly littered across the field as Heritage totaled 22 penalties on a night where the officials had pink penalty flags for breast cancer awareness. Head coach Pat Surtain, former NFL Pro Bowler for the Miami Dolphins, was impressed with his team’s performance but is pushing his team to limit the mistakes. “We cannot be a championship team with 22 penalties!” said Coach Surtain. We need to clean it up!

Patriot Quarterback Jason Brown who came up with clutch scrambles all game, put his team on the board with an 8-yard touchdown run on a zone read play. Their next possession would stall with a fury of pink flags that would back them up to their own end zone. Punter Zack Thompson stepped on the end line during a punt which put the Chiefs on the board with a safety.

Gibbons looked to take the lead before halftime with a drive in the redzone. After an incompletion the refs inexplicably let 14 seconds run off the clock leaving the Chiefs with just 13 seconds left to score before half. Nick Scalzo threw over the middle to Daniel Larose but the pass would fall to the ground incomplete. Gibbons then attempted a 40-yard field goal that would come up short of the crossbar leaving the halftime score at 7-2 in favor of Heritage.

The second half saw the Patriot offense come to life with a solid running game. Brown and running back Miles Jones would combine to make big runs in the second half including a 40-yard touchdown by Jones run in the 3rd quarter. Running back Abraham Alce added two rushing scores to help extend the Heritage lead.

“We feel like we wear teams down,” said Alce. “We practice 4th quarter drills and that’s exactly what we look to do.With this win this shows that we know what we are doing and are ready for any team that we face.”

Heritage is looking to continue its winning ways against Miami Jackson next week in Dade County. Cardinal Gibbons will look to bounce back on their home field against Hallandale.