You are here: Home / Basketball / Another night another NBA star lost to injury: Chris Paul out 3-5 weeks 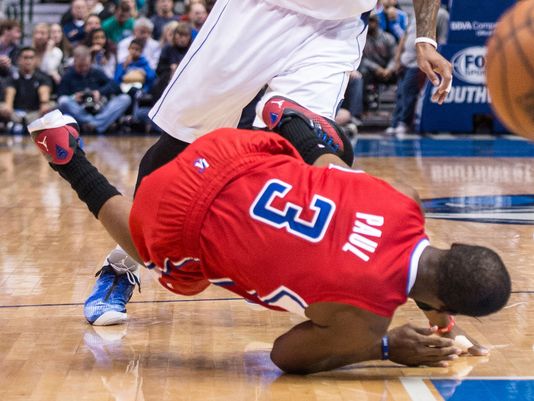 NBA stars are going down at a rapid pace with a variety of injuries leaving their teams hampered for weeks and months at a time.

It’s becoming more common than anybody wants to admit or deal with.

Chris Paul of the Los Angeles Clippers is the latest victim of this vicious recurring trend after suffering an injury to his shoulder that has preliminarily been ruled to have been separated. Head coach Doc Rivers estimates his All-Star guard will miss 3-5 weeks with the injury but an official diagnosis and recovery schedule is forthcomig.

The Clippers are one of the deepest teams in the league but are already short in the backcourt with J.J. Redick (wrist) still on the mend. But no matter how deep a team is, they are never prepared to deal with the loss of a talent as great as Paul.

Somehow the Clippers will need to find a way to facilitate the offense through increased transition and a few more post-ups for Blake Griffin on the block. DeAndre Jordan may also get more touches but the guys who will need to step up the most are Jamal Crawford and Darren Collison.

Crawford and even more so with Collison, will have to handle facilitating the offense for the others to succeed in the absence of Paul. It was Collison who backed Paul up in 2009-10 and played the best basketball of his career. After Paul went down with a season-ending knee injury, Collison finished the final 36 games with averages of 19 points, 8.8 assists, 3.4 rebounds and 1.4 steals. He was a lights out shooter in that stretch shooting 50.4% from the floor, 44.4% from three and 84.6% from the line.

But that was four years ago and his last three seasons have been marred with inconsistency in his per 36 minute averages since his rookie season.

While that isn’t exactly encouraging news, Collison is by and large a guy who needs a coach to show confidence in him. Doc Rivers should be able to provide him with the boost he needs to help the Clippers over the next month and change.

L.A. will face tough tests against the Spurs, Heat, Blazers, and Warriors during Paul’s absence. How they play against those teams (especially the Western Conference ones) will go a long way in determining how much ground (if any) they will need to make up once Paul returns. Rivers is no stranger to managing injuries having come from the brittle Celtics teams of recent years. He as much as the players on the court will determine if the Clippers will maintain heading into the All-Star break without Paul.