You are here: Home / Basketball / Anthony Davis out indefinitely for the New Orleans Pelicans 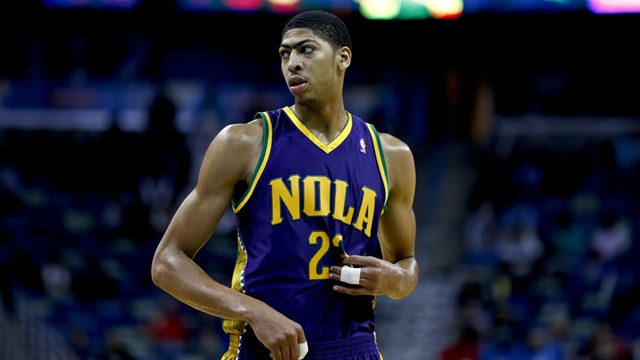 Sophomore sensation, Anthony Davis, is out indefinitely after suffering an injury to his left hand. Davis suffered the injury in the first half of the Pelicans game against the New York Knicks on December 1. The official word from the team came during the game in which New Orleans held off the Knicks to earn their 8th victory of the season 103-99.

Anthony Davis suffered a non-displaced fracture in his left hand. He will not return tonight. A timetable for his return is TBD

After an injury-filled rookie campaign, Davis had the the NBA on lock  so far this season averaging 18.8 points, 10.2 rebounds and an insane 3.6 blocks.  Offensively the Pelicans can sustain the loss of ‘The Brow’ with guys like Ryan Anderson set to step in and start in his place. Tyreke Evans and Eric Gordon will also get a chance to earn their gargantuan contracts with more touches while Davis is on the mend.

The Pelicans will not be able to fill the hole Davis leaves on defense unfortunately. New Orleans, even with Davis, are just a middling team defensively ranking 17th in opponents points per game. The Pelicans can ill-afford to allow the lane to become a revolving door while Davis is out. It will be up to head coach Monty Williams to figure out a defensive scheme that keeps New Orleans relatively close to where they are now defensively.

Meanwhile, Davis will see a specialist and get a timetable on his recovery. Hopefully he will be back on the court soon to continue his stellar season.