You are here: Home / Baseball / At the Deadline: Buy, Sell or Hold the AL East edition 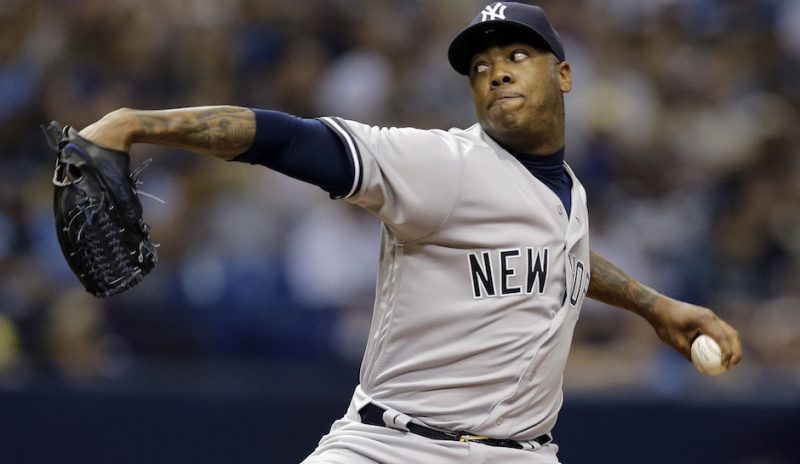 Just a short time ago we previewed the second half of the season and the AL East was a division that gave us trouble. The accuracy of our predictions will be heavily influenced by what happens at the MLB Trade Deadline. So let’s take matters into our own hands–sort of–and evaluate what should/could happen as teams buy, sell or hold in the American League East.

You do not need to be a baseball scholar to understand that the Orioles need starting pitching, desperately. Chris Tillman has had a strong season, but the rest of the rotation has been a disaster. Kevin Gausman hasn’t had the breakout season many expected. Yovani Gallardo has looked mediocre at best since his return from injury. Meanwhile Ubaldo Jimenez has an unbelievably bad 7.38 ERA. It is a testament to the offense, the bullpen and manager Buck Showalter that this team sits in 1st place despite their rotation woes. Unfortunately, while the team’s illness is obvious, the cure is not. Baltimore lacks both the prospects and the financial flexibility to be serious players in the trade market. Therefore the chances of  the team making any moves at the trade deadline look slim.

The other feasible scenario is that the Orioles will try to make a treasure out of another team’s trash. A semi-solid veteran like Jon Niese may fit the bill. The Pirates appear ready to unleash their young starting pitching, which would essentially leave Niese without a job. In which case, Pittsburgh may be willing to trade him off for fringe level prospects.

The Red Sox have already earned their aggressive buy tag with the additions of Aaron Hill, Brad Ziegler and Drew Pomeranz. But will they add more? I suspect two factors will decide their course of action.
#1) Will Steven Wright and Eduardo Rodriguez pitch well enough in the next couple of weeks to sooth the anxiety of the Red Sox upper management?
#2) Will a true ace become available?
While young phenom Yoan Moncada is likely untouchable, Boston seems willing to move their highly touted prospects to increase their present day chances of winning. Chris Archer would certainly be a tantalizing prize for Boston.

The Blue Jays are not only sitting in a wild card position at the moment but are well within striking distance of the AL East crown. That’s pretty impressive considering the lack of name value in their rotation and the holes in their bullpen. The team traded away most of it’s top talent last season when it acquired Troy Tulowitzki & David Price. Don’t expect Toronto to make that kind of splash in 2016. They simply don’t have the assets to do it again. However due to the pending free agency of Jose Bautista and Edwin Encarnacion this season almost has a Custer’s Last Stand feel to it. Expect them to grab some bullpen help. They also will be in the market for another starting pitcher. Rich Hill, with his one-year deal would be particularly appealing to the Jays, but it seems that Oakland’s asking price is way too high.

These are not George Steinbrenner’s Yankees. The “Boss” would never sell, but the Steinbrenner children have shown more prudence. A win streak before the deadline may change things, but a limited selloff seems likely. Aroldis Chapman & Carlos Beltran are both approaching free agency and hold significant trade value. Mark Teixeira will also be a free agent after the season but would be harder to trade. The veteran first baseman is having a terrible year, has been injured for much of it and would have to approve a trade. So he will probably finish out the season in pin stripes.

Although rumors have said otherwise, it is unlikely that New York will want to deal Andrew Miller or Dellin Betances. The veteran laden team will not be looking to rebuild but rather reload & contend in 2017. Trading either reliever would be counterproductive to that mission unless it is an absolute blow away offer.

It looks like the Rays constant smoke and mirrors act has finally failed them. For the first time since 2007 they are not competitive. It was an impressive run for a team with the financial restraints that Tampa has had. The question is what does the team do now? Will they look to compete in the more immediate future or blow up the entire team? Much will probably be decided by what offers they receive. Only Evan Longoria and Blake Snell are likely truly untouchable. Chris Archer is probably a safe bet to stay in Tampa as well. He is having a down year which may depress his trade value and he is signed to a very team friendly contract. After those three everyone else on the roster is fair game, with Matt Moore or Jake Odorizzi likely to be on the move. However with no true bad contracts on their roster or significant players approaching free agency the Rays have no reason to be aggressive sellers. Buyers will not find discount shopping here.