You are here: Home / Baseball / Athletics: World Series Or Bust 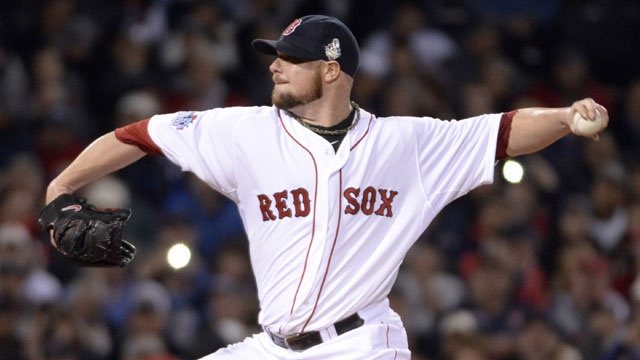 The home run is sexy, but pitching wins championships. This seems to be the mantra of the Oakland A’s in this 2014 season. The A’s have followed up their acquisitions of Jeff Samardzija and Jason Hammel by acquiring Boston Red Sox ace Jon Lester. However the price for Lester was steep.

The complete deal is this: The A’s receive Jon Lester and Jonny Gomes (plus cash) for Yoenis Cespedes and a competitive balance pick.

For the A’s just making the playoffs are not enough, it’s World Series or bust. So the team has accumulated what will be the best post-season rotation. Jon Lester now takes the number one slot, followed by Samardzija, Scott Kazmir & Sonny Gray.  Lester is more than just an ace, he is a battled tested ace. He owns an impressive 2.11 ERA in the post-season. Even better for a team trying to make a run, he is at his best in the World Series. The numbers are staggering: 3-0 0.59 ERA and a 0.65 WHIP.

In addition the A’s receive veteran slugger Jonny Gomes. Gomes will likely platoon with surprise standout Stephen Vogt. Combined the A’s hope they will offset the loss of Cespedes. The team will also hope that Josh Reddick’s recent hot stretch is a return of prominence for the right fielder.

However, this deal does hold some significant risk for Oakland. Lester will be a free agent after this season and there is zero chance that the small market Athletics will re-sign him. He is simply a rental, a hired gun for the playoffs.

Perhaps the bigger risk is trading away one of their biggest bats for the ace. Cespedes hasn’t exactly been a “money ball” type player over the last couple of years, with an on-base percentage floating around .300, but he is still a dangerous hitter. And like Lester he has saved his best for when it’s counted the most.  The A’s have failed a lot in the post-season as of late, but it hasn’t been due to Cespedes’ play. In 40 post-season at bats he is batting a smooth .350. Maybe the bigger question for Oakland goes beyond the numbers. He was important to the team in more ways than just as a power hitter. On a team without superstars, he was the one true “name” player. And he wore that title with pride and dignity. Cespedes was loved, both by fans and his teammates. He was a huge part of what made the A’s so special in recent years. He was a key component of what made them the best team in baseball so far this season. What is certain is he will be missed in the 2015 season. The A’s will worry about 2015 next year; right now they are going all in.

Will this trade be considered a win or a loss? This question will be answered in the post-season.  If the Oakland A’s have a ring ceremony in 2015, it won’t matter that both Lester and Cespedes will no longer be with the white and green.