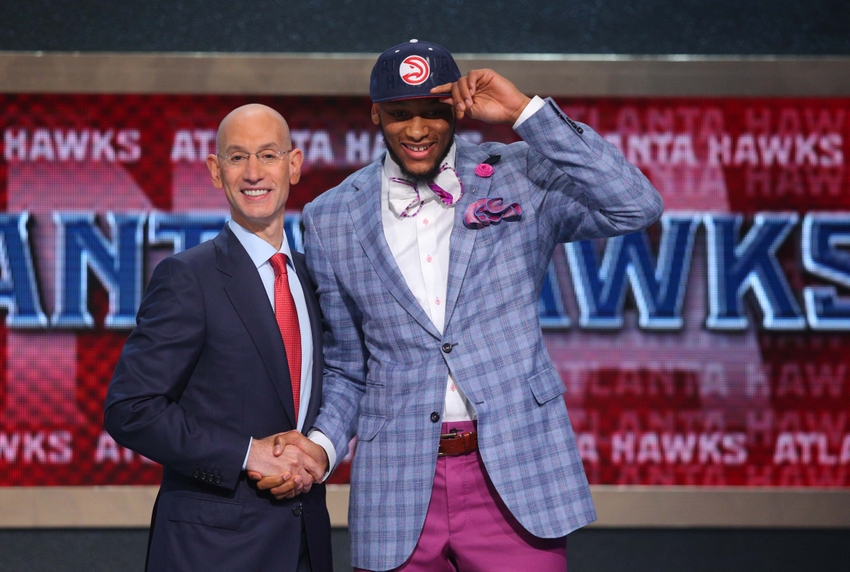 The Atlanta Hawks added more depth at the forward position and took big man Adreian Payne out of Michigan State with the 15th pick in the NBA Draft. His final year of college saw him on the preseason watch lists for the Naismith and Wooden awards. At the end of the season Payne was named Second-Team All Big Ten. He also averaged 16 points and seven rebounds per game for the Spartans.

His scoring average leaped by a significant number each season since 2010. Payne went from 2 points per game to 7 to 10 and finally finishing at 16 in his senior season. He has a 7’4 wingspan which helps Payne become a force in the paint. His game was extremely  versatile at Michigan State as he was able to crash the boards and block shots at will. His mid-range and three-point shooting also compliments his dominant inside game.

One of the most touching stories of college basketball this season was Payne and his relationship with Lacey Holsworth, a young cancer patient who passed away after the NCAA Tournament. Payne first met Holsworth at a hospital and their relationship flourished right when they met. One of the most heart-felt moments was when Payne and Holsworth cut down the nets after Michigan State won the Big Ten Tournament. Lacey’s smile always motivated Payne and drove him to go deep in the NCAA tournament to honor her.

Atlanta got a steal with Payne with the 15th pick and he should become an excellent leader this season with the enthusiasm of a winner.

The Hawks’ second-round pick at 43 overall was 7’3 big man Walter Tavares out of Cape Verde. Verde was the tallest player in the draft and is also 265 pounds. He played with CB Gran Canaria over the past five years. Playing in one of the most competitive leagues overseas, he averaged 12 rebounds and 2 blocks in 40 minute per game.  Tavares is an elite rebounder and shot blocker but his mid-range game is a trait that can be improved. Tavares is extremely efficient at the pick and roll and can become a great contributor after being developed over the next couple of years. He will most likely continue his services in Cape Verde as the Hawks are looking to improve the play of big men Lucas Nogueira and Mike Muscala in the immediate future.

The Hawks also acquired swingman Lamar Patterson out of Pittsburgh with the 48th pick in a trade with the Milwaukee Bucks. Patterson averaged 17 points per game with the Panthers. Patterson is a great distributor of the ball and an extremely underrated three-point shooter. He shot 44% on the season and averaged five three-point attempts per game.

Payne and Patterson’s senior experiences in college will bring a mature and high basketball IQ to Atlanta. Th Hawks desperately needed a shot blocker this season and Payne can bring that skill set. Tavares can be a force in Atlanta but it will be interesting to see how his game develops over in Cape Verde the next few seasons.

Danny Ferry and the rest of Atlanta’s management impressed me in this draft and these talented picks greatly compliment who the Hawks can acquire in free agency.