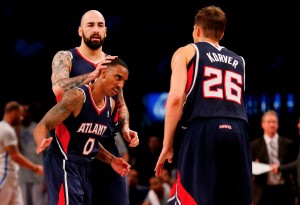 The Atlanta Hawks finished the regular season 38-44, entering the playoffs with the worst record of the teams in either conference.  Significant injuries occurred during the season with star center Al Horford going out for the year. Al Horford is a very big part of the hawks offense and is the cog that keeps the engine running. The offseason is upon us and there are many free agents that the Atlanta Hawks can use to build their team for the future.

The Atlanta Hawks are reported to be interested in accepting Pero Antic’s team option which would give the team a total of ten players under contract. Restricted free agent Mike Scott was selected in the 2nd round of the 2012 NBA draft. Scott is a must sign for the team as he is the guy who developed the most last summer as evidenced this season. Scott will be a lock to return to the team barring an outlandish offer being administered to him. That would leave the hawks with 11 players on the roster and they also have two draft picks in this year draft.

Their are some interesting players in this years free agent class. The hawks are currently in the market for a slashing small forward and a center, assuming nsidering 2013 draft pick Lucas Noguiera isn’t brought over from Spain. Here are some interesting names to watch out for in the Hawks favor.

RFA Center Greg Monroe- Could bolster the front court as he is a great post player and passing big.

UFA Small Forward Luol Deng- Certainly not the player he used to be but serviceable nonetheless.

RFA Small Forward Gordon Hayward- Has improved a lot and could be used to the best of his potential in Atlanta.

UFA  Small Forward Trevor Ariza- Even though i fear he is only playing this way because it is contract year, a “3 and D” player is needed in the Hawks repertoire.

UFA Center Marcin Gortat- a very serviceable big who can go out and get a double-double if need be.

With whoever the hawks decide to sign out of this years free agent class, just know that Atlanta’s future is indeed very bright.