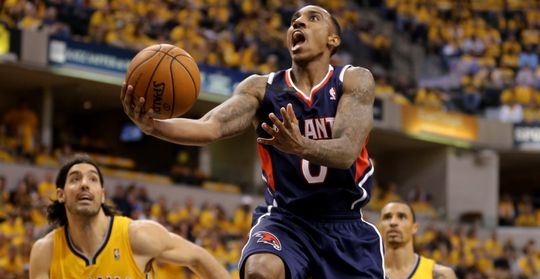 2013-14 was a season of  adversity filled with  many trials and tribulations for the Atlanta Hawks. From losing all-star Al Horford to falling from the third seed to the eighth, a drive to succeed was always instilled by first year head coach Mike Budenholzer.  Coach Bud brought his knowledge from his 19-year tenure as an assistant coach to Gregg Popovich in San Antonio and attempted to bring a winning culture to the city of Atlanta.

Atlanta’s season was plague by a whopping amount of injuries. The Hawks’ injuries got to the point where they only won two games in the month of February and were looking for answers. Atlanta eventually saw new light in big men Pero Antic and veteran big man Elton Brand to help make up for the loss of Horford.. Brand was successful in the paint shooting 53% for the season. Atlanta eventually started to drop drastically in the standings but was able to hold off the New York Knicks for the last playoff spot in the East at 38-44. Lack of strength in the Eastern Conference this season helped the Hawks tremendously in maintaining playoff position all season long.

The Hawks ended up winning seven out of their last 10 regular season games including key wins over the Indiana Pacers and the defending champion Miami Heat. This hot streak made up for their collapse in the second half of the season. Jeff Teague finished the season averaging 16 points and 7 assists per game. Teague averaged 19 points in the postseason and posted a playoff-high 29 points against Indiana in the first round. Teague’s season scoring average has been increasing every season since his rookie campaign in 2009.

Signing Paul Millsap was a key element in the Hawks making the playoffs despite Atlanta’s myriad of injuries. Millsap put the team on his back all season long and helped contribute in every aspect of the game when Horford went down. Aside from Horford, the Hawks saw Kyle Korver, DeMarre Carroll and Lou Williams miss a fair share of games due to injury. Millsap elevated his game in Atlanta and as a result, earned his first all-star game appearance. Double-doubles were constantly posted by  Millsap and  he watched his field goal percentage rise with a larger role on the team. Millsap averaged 17 points and 8 rebounds while shooting 47% on the season. He also averaged 19 points per game in Atlanta’s seven game first round series against the Indiana Pacers. March was Millsap’s best month of the season in which he averaged 18 points and 7 rebounds per game.

The Hawks are still around at the top of the league in cap space. Atlanta has plenty of money left on the table in free agency as a result of the Joe Johnson trade to the Nets in the summer of 2012. Gustavo Ayon, Shelvin Mack and Mike Scott are restricted free agents and Elton Brand and Cartier Martin are all unrestricted free agents for Atlanta. The Hawks will wait and see if Brand contemplates retirement. After a solid season by Brand, he might be re-signed to continue as a back up for Al Horford.

After the Hawks’ fantastic first round performance against the Pacers, the organization is hoping that it will be enough to attract quality free agents to Atlanta. The Hawks were at a dismal 28th in attendance this past season and are looking to bring a superstar in that will ignite the city. It seems that Philips Arena is always in full force during the postseason but cannot bring in ticket sales during the regular season. A consistent all-star in Atlanta would change that around. The Hawks have had numerous opportunities to acquire superstars in the past. Atlanta passed up on drafting Chris Paul and Deron Williams in the 2005 NBA Draft. In the summer of 2013, GM Danny Ferry was in hot pursuit of Chris Paul and Dwight Howard but could not pull off a big splash.

The Hawks have a bright future ahead of themselves with the phenomenal management they are bringing in and could be dangerous with a healthy team. Teague is evolving into a star every season and Millsap is bringing a physical presence to Atlanta with a never say quit attitude. A healthy Horford also determines how far Atlanta could go on the next level. Competition is increasing in the East with teams on the rise like the Toronto Raptors and Washington Wizards. The Hawks will have to match the type of moves those teams are making in the offseason and take advantage of a deep 2014 NBA Draft class.

It will be a busy summer and the Hawks will try to pull all the stops in order to electrify the city of Atlanta and bring a new level of basketball and excitement to the city.