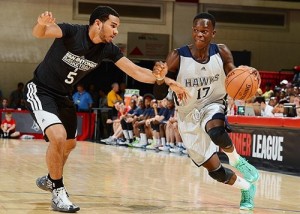 The NBA’s Las Vegas Summer League will take place for the Atlanta Hawks starting July 12th. The full roster was announced and is as follows:

Sat out last season because of a back injury, Jenkins is out to show the Hawks brass that he is healthy and is capable of earning significant playing time. In 2012, Jenkins showed his remarkable shooting ability which was highlighted during the draft.

The only first-round draft pick from 2013 still on the active roster showed potential last season. He is a natural playmaker able to get each teammate in their desired spot.

Played in Spain for most of the 2013 NBA season. He showcased his post game that has been disappearing from today’s NBA product. Muscala also has a smooth stroke from mid-range.

Drafted straight out of Michigan State, Payne is a stretch-four with a decent good NBA caliber range. Payne prefers to play the inside out game rather than just pick and pop. Payne’s post game is above average but should be an area of focus in Las Vegas.

Patterson is a playmaking guard with a keen ability to get to the basket. Patterson is not as athletic as fans would like but he makes up for it with a high basketball IQ.

The 7’3 center from the island of Cape Verde never picked up a basketball before the age of 18. He has a wingspan of 7’9 with raw athletic ability. The team will want to see if he can protect the rim. Edy is most likely being stashed overseas after summer league is over.

A streaky shooter that needs to improve his consistency. Has been described as a “power guard”

Played with the 2013 Hawks summer league team, he showed signs of scoring ability and being able to defend the pick and roll well.

Saint Mary’s College Male Athlete of the Year averaged 15.2 points, 3.8 rebounds and 3.9 assists per game. He was good leader on his team and finished eighth in the WCC in scoring

The youngest brother of All-Star Hawks’ forward Paul Millsap, didn’t do much in college statistically, but he is looking to show the team he has what it takes to play in the NBA.

When he is on the court Muric provides great energy and a strong presence on the glass. He has a good all-around game with real scoring potential. He likes to shoot from outside, but he is not consistent from three-point land.

Averaged 13.8 points, 5.0 rebounds, and 1.6 assists during the tenure of his senior season with the Florida Gators.

All-SEC first-team point guard who scores with reckless abandon. Pushes the ball up the court with a head of steam each and every time.

Plays with a lot energy on the court. Can score when you need him two as a third option. Has unique size for a 6’10 Forward/Center.