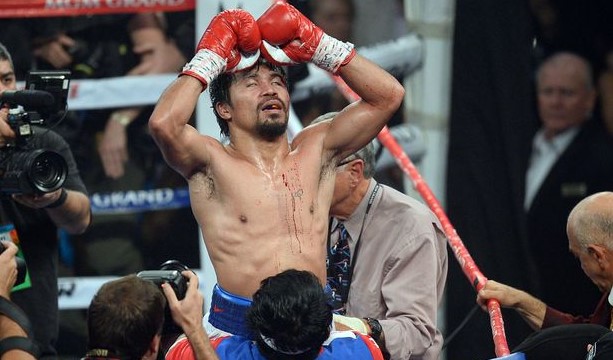 Nobody was surprised by the outcome, but it was touch and go for a while there.

Manny Pacquiao (56-5-2) dominated the last half of his 12-round fight with Timothy Bradley (31-1) to regain the WBO welterweight belt. It was entertaining with action throughout, but at the end of the day the better man won the fight.

“I tried, I really tried,” Bradley said. “I really wanted that knockout. Manny is a great fighter, one of the best in the world. I tried throwing something over the top. I knew I had to do more in this fight than the last fight.”

The man known as “Dessert Storm” truly did give his best effort. The first six rounds were even as Bradley seemed to load up on his punches trying to knock Pacquiao out. He was the early aggressor making Pacquiao reverse skate for the majority of the early rounds.

He committed everything he had to over hand rights to the head and ripping hooks to the body. The problem is he didn’t land most of the time (just 22% according to CompuBox) and he would swing wildly almost jumping out of his shoes losing his balance momentarily.

Pacquiao remained steady throughout and capitalized on his opponent’s over-aggressiveness. The straight left hand had a sobering effect for Bradley whose plans for a knockout were never really feasible. Pacman relied on his superior boxing skills and experience to weather the ‘dessert storm’ and take control of the fight from the seventh round on.

Where the fight took a momentous turn (in my opinion) was in that seventh round where Bradley seemed to take the round off. It’s unclear if he was ‘punched out’ or if he tried to gain a mental edge over Pacquiao by absorbing punches to show that the Philippine couldn’t hurt him. Bradley sat in the corner at one point in the round and let Pacman unload.

He egged Pacquiao on urging him to keep coming in a feable attempt to land a big counter-punch but Pacman was never careless. While Bradley never appeared to be seriously hurt, it seems he tried to invoke a different strategy but failed miserably in disrupting Pacquiao and it changed the fight for good. 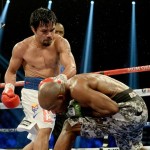 Pacman seemed to lose respect for Bradley’s power as the fight waged on and he became the aggressor in the later rounds. Pacquiao was able to time Bradley who predictably ducked down at the same angle after each exchange which made for easy pickings. Once he started committing to combination punching there was really nothing Bradley could do, except swing for the home run without gas left in his tank.

Adding some levity to the evening was Pacquiao’s mom who seemed to be putting some sort of hex on Bradley in the ring. The comedic influence of that ran its course and nothing more than Pacquiao’s superior skill should be attributed to the outcome of the night.

The newly vindicated Pacquiao was complimentary of his opponent after the fight but also acknowledged he was hip to Bradley’s game plan.

“Bradley threw a lot of punches, I didn’t want to get careless. I made adjustments. Freddie asked me to shorten the distance. Bradley is better from the first fight. He hurt me on the chin. We made adjustments. Bradley was wild on the outside, so I made my attack on the inside. Tim Bradley was not an easy fight.”

A tough opponent for sure, but Pacquiao was never really in trouble and its time to move on from this match up for good. Bradley has exorcised all his demons regarding Pacquiao even in defeat (maybe with the help of Pacman’s mom). Hopefully fans have too and can recognize him for the great fighter he is.

For Pacquiao he is eying the winner of Marquez vs. Alvarado on May 17 as a fight with Floyd Mayweather is largely impossible.