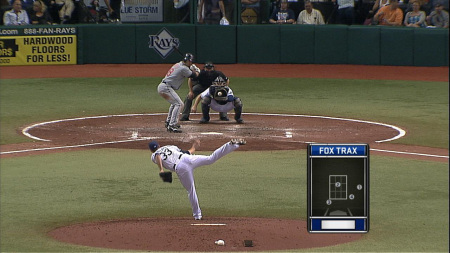 So much of the modern sports TV viewing experience has been enhanced with technology, it’s hard to imagine watching sports without it. In football, the yellow first down line is a staple of all broadcasts. In basketball, fans can learn about their team’s plays as the commentator breaks it down the telestrator. And it seems like the overlaying graphics for all sports become more engaging and informative with each passing year.

In baseball, one of the most intriguing innovations over the past few years is strike zone technology. Every pitch now can be tracked and plotted in its relation to an electronic strike zone. With pitches hurtling toward home plate sometimes at 100 miles an hour, it makes sense that technology might be helpful in pinpointing the location of the ball. Not only that, but technology is also much more consistent than home plate umpires (just ask Matt Kemp). To take just one example of inconsistency, according to Etan Green at FiveThirtyEight, “the strike zone expands in three-ball counts and shrinks in two-strike counts.” The great Ted Williams once said that the strike zone is “whatever that day’s umpire says it is.”

I’m not much of a baseball fan, but I usually try to tune in at least a little bit during the playoffs. As I was taking in a game the other day, I noticed that strike zone technology is now capable of being implemented in real time. That is, information about a pitch’s location is available immediately after every pitch. For this particular broadcast, the electronic strike zone graphic was placed in the bottom-right corner of the screen, displaying the location of each pitch as it was thrown.

I usually don’t watch much baseball, so this broadcast quickly became strange to me. Viewers of the broadcast could see, with very strong evidence, an umpire getting a call wrong right as the pitch happens (and apparently, consistent strike zones has been a problem in these playoffs so far). I was watching with my friend Chow and we just started laughing every time there was a ball that was called a strike, or vice versa. Whenever a batter complained about a call from the umpire, we couldn’t help but notice that the arguments could so easily be rendered unnecessary. It’s not often that people have information available to do their jobs better (and the information is available legally, immediately, ethically, etc.) but don’t get to use it.

The implementation of automated strike zone calls seems to be a no-brainer (to be clear, I’m not calling out umpires for incompetence – this particular task of calling balls and strikes is just much more suitable for technology than humans). But a quick look around the Internet reveals that many baseball fans argue against using the technology. It’s almost indisputable that strike zone technology is more accurate and consistent than umpires, so many of the arguments have started to revolve around concepts like the “human element” and “gamesmanship.” Lots of fans have pointed out little things that could only happen with a human behind the plate. For example, it’s interesting to watch how a star pitcher expands the strike zone by repeatedly “painting” the corners just a little bit on the edges. How a manager-umpire argument affects game dynamics is juicy stuff that you can’t get with a robot at home plate. Recently, we’ve learned about how elite catchers can subtly coax strike calls from umpires on borderline pitches just by the positioning of their bodies (“framing”).

I’ll be the first to admit that I love that stuff too. Stories about the lengths that competitors go to get an edge has always fascinated me, and the zero-sum nature of sports ensures that these kinds of stories will always exist. Sometimes, the personalities involved in sports are almost as interesting as the games themselves.

However, I can’t admit that sports are better when officials are deliberately deprived of very accessible information that could help them officiate more accurately. As interesting as the human element is for talking heads and chatting around the water cooler, it’s not the essence of the sport itself. Sport is often called the ultimate meritocracy because skills are (supposed to be) the only determining factor in who wins and loses, and the rules are (supposed to be) the same for everyone. Therefore, to the extent that it’s possible in sports, we should strive to have as even a playing field as possible, and that means giving officials all of the information they need so that players are succeeding on their own merits, not subjectivity from officials.

Now, some might argue that something like framing is a baseball skill and therefore a part of the game. However, baseball was not designed for framing to be an inherent part of the game. We know that because the strike zone is an officially-defined area – what happens after the pitch is caught has no codified bearing on the ball/strike call (dropped third strikes excepted). Likewise, the way a pitcher paints a corner of the strike zone should have no bearing on calls. The unpredictable whims of the home plate umpire should have no bearing on calls.

Of course, technology can’t solve every problem in sports officiating, but it really should be implemented where it can be done feasibly. The strike zone is one area in which technology can be useful. Home plate umpires won’t become vestigial because they’re still needed for other calls around home plate (if you’re worried about the “they’ll lose their jobs” angle), and they can even still do the hand motions for strikes and strikeouts (which look really fun to do) – they’ll just have the call relayed to them from the technology operators.

If baseball still refuses to use electronic strike zones, the credibility of the game will take a hit every time the broadcast shows a ball while the batter is arguing a called third strike. Chow and I will probably just laugh when it happens, but it’s not a laughing matter for the players and teams who get the short end of the stick. Baseball has been very slow in embracing technology and almost childlike in its resistance to it, but now’s a chance to show that it has grown up. It’s time to implement the electronic strike zone.

Dar-Wei would like to see strike zone technology implemented wherever it can be, but admits that arguing balls and strikes in rec softball is actually kind of fun. He can be followed on Twitter at @chendw.