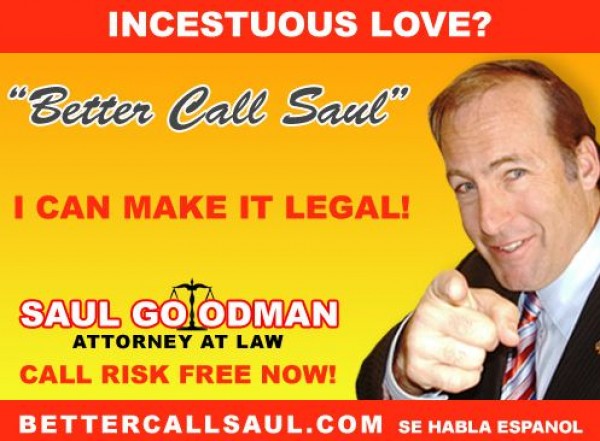 Breaking Bad is one of the most unique TV series to hit cable in history. It’s five-season run is coming to a close but one of the more beloved characters on the show is getting a spinoff.

Know-everything lawyer Saul Goodman, played by actor Bob Odenkirk, will be getting his own show fittingly titled “Better Call Saul”. The title makes reference to his TV commercial ads on the actual Breaking Bad show.

AMC made the following the statement in regards to the spinoff:

AMC and Sony Pictures Television confirmed today that they have reached a licensing agreement for a spinoff of Vince Gilligan’s landmark AMC/SPT series ‘Breaking Bad.’ As conceived, the new series is based on the show’s popular Saul Goodman character with the working title ‘Better Call Saul.’ Plans call for Saul to be a one-hour prequel that will focus on the evolution of the popular Saul Goodman character before he ever became Walter White’s lawyer.

This could either be TV gold or a desperate attempt to keep Breaking Bad fans watching the network for something remotely similar.

Do we really want to know Saul Goodman the man?

With creative writing and what I imagine will be very bizarre plots this show can probably last a season or two.