You are here: Home / Baseball / Biggio Will Forever be a Grinder 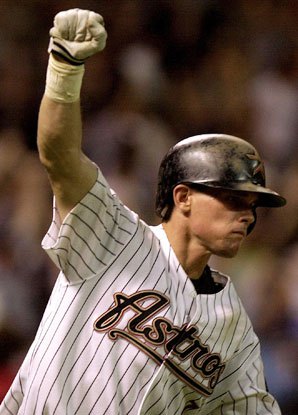 It’s a travesty! Craig Biggio was robbed! Or was he? The former Houston Astros player fell two votes shy of the Major League Baseball Hall of Fame. So while his contemporaries Greg Maddux, Tom Glavine and Frank Thomas prepare for a Cooperstown celebration, Biggio will be forced to wait by the phone for another year. For Biggio supporters this is a cruel and unfair cut. But is it truly unfair?

Biggio’s career was definitely an impressive one. He came up as something rare, a catcher with speed. To save his legs the Astros moved Biggio to 2nd base where he shined, winning four Gold Gloves. Biggio spent some time in the outfield as well. No matter what position he played on the diamond he hit. He along with Jeff Bagwell, and Lance Berkman formed the fearsome “Killer Bees” in Houston. Biggio captured 5 Silver Slugger awards (1 as a catcher, 4 at 2nd) & had 7 All-Star game appearances. Of course the biggest cap on his Hall of Fame resume is being part of the exclusive 3,000 hit club.

Three thousand hits are one of those legendary markers that seem to guarantee induction into the Hall of Fame. Only 28 players have amassed that many hits. Of them only four are not in the Hall. Three of them are not included for obvious reasons. Pete Rose is banned by MLB for gambling on baseball; Rafael Palmeiro was suspended for failing a PED test a short time after vehemently denying such use to Congress; and the great Derek Jeter is not yet eligible. Only Biggio remains in good standing, yet still he waits for his plaque to go into the Hall. In fact, outside of Palmeiro, Biggio is the only 3,000 hit member not to get in on his FIRST year of eligibility. Still, there is an argument to be made, that the Hall of Fame voters have in fact gotten it right.

Biggio is somewhat more comparable to the final two, Wade Boggs and Lou Brock. However Wade Boggs had 5 more All-Star appearances and 3 more Silver Slugger awards. Also in Boggs favor is this; Biggio’s top single season batting average in his career was .325. Wade Boggs had 8 seasons in a row that he hit atleast .325, while winning 5 batting titles during his illustrious career. Biggio does compare favorably to Lou Brock statistically. In fact he beats Brock in almost every counting stat, except two (triples and stolen bases). Unfortunately for the Biggio camp, those stolen bases are all important. Brock had 1 less All-Star appearance than Biggio but Lou Brock was an 8 time stolen base leader and the stolen base king until Rickey Henderson shattered the record 12 years later.

The one common thread through all seven of the players directly behind Craig Biggio on the all-time hit list is this: greatness. They were not only stars, but had moments of being true superstars. As good as Biggio was, he was never in the argument of the best player in baseball. He was not a super star. But he was a “grinder”. A guy who did the little things that made himself and his team better. Maybe he wasn’t quite a superstar, but he was a star nonetheless. A player who maximized his tools every day, to be that consistent component that every successful team needs. Sure, you could make the argument that Craig Biggio should have been a 1st ballot Hall of Famer. But it is almost poetic that it will take him a couple of seasons to make the Hall. The little Killer Bee grinded his whole career and it’s only fitting that he grinds his way into the Hall to stand forever with the greats of the game.