You are here: Home / Basketball / Breaking Point: The New York Knicks and Brooklyn Nets aren’t who they thought they would be 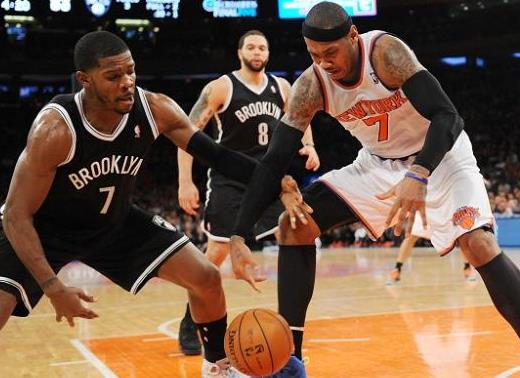 A little over a month into the NBA season and nobody thought the New York Knicks and Brooklyn Nets would be at the bottom of the Atlantic like shrimps on the ocean floor.

Seriously, what the hell is going on in the Big Apple?

The two teams have combined for an 8-26 record as the season has sprinted into December…let that sink in for a moment.

Teams like the 76ers, Raptors, Suns, Pistons and Bobcats all have better records than these two teams who were supposed to run away and hide at the top of the Eastern Conference with the Heat and Pacers.

Where these two teams have excelled this season is at being dysfunctional and injured. Both coaches look like they have no clue as to what is happening. The rotations are erratic (partly due to injuries) with putrid efficiency on both offense and defense.  Take a look at some of these stats as of December 5.

Nothing is working for either team but at least they still have their hatred for each other.

Their is a self-imposed importance on  beating one another that doesn’t really matter to anybody but them. It was a hype that had relevance a year ago, but when two bad teams fall in a division does it make a sound?

Luckily for them their fall from grace isn’t a steep one due to the cast of characters in the (L)Eastern Conference. There is still time to become relevant again but the proper adjustments need to be made.

For the Knicks the loss of Tyson Chandler for 6-8 weeks at the beginning of the season has hurt their defense, but it has taken a bigger effect on their court presence during games. Chandler is a fiery personality who gives maximum effort and without his exuberance the Knicks have looked lifeless. He also makes Raymond Felton a better play-maker than he actually is by giving him an outlet for alley-oop dunks. Chandler also is adept at giving New York extra possessions with his offensive rebounding (4.1 per game last season) and that is something that hasn’t been replaced by anyone on the roster.

Carmelo Anthony is doing all he knows how to do to help the team. Yes he is still shooting a whole hell of a lot with 22.2 attempts per game but that is right on track with what he did last season when the Knicks were good. He is averaging a career best 9.9 rebounds and many are overlooking that effort on the glass saying he just jacks too many shots. Sure he could pass the ball more but to who? Iman Shumpert is a shell of himself with all the trade rumors and his former offensive self wasn’t all that great anyway. J.R. Smith hasn’t hit a shot since Game 3 of the opening round of the playoffs last year and is still recovering from a knee injury if you listen to him tell it.

Coach Woodson is suddenly on the hot seat and has to find ways to tinker with the offense to make this team better. Defense is about effort but the Knicks are made up of personalities that love to score. They will have to use a better offense to key a stronger defense at least until Chandler comes back because Andrea Bargnani manning the middle is (insert your own joke here).

There is more to discuss on the Knicks than any one article could delve into but we must move across town to Brooklyn.

Their first mistake was hiring Jason Kidd as the head coach but that isn’t something they are willing to pony up to just yet.  The biggest issue, other than Kidd, has been health. Deron Williams, Andrei Kirilenko, Brook Lopez, Jason Terry and Paul Pierce all have missed (or are missing) significant time this season.  For that reason alone the Nets feel they have hope and they maybe right.

They have added some old rusty parts in Pierce, Kevin Garnett and Terry but without Williams to direct them on the court the Nets offense has been a train wreck. Because some of the older parts have played significant minutes the defense has also struggled especially in the latter part of games. That in turn has led to a demotion of sorts for assistant coach Lawrence Frank who was hired to help mentor Kidd and develop Brooklyn’s defensive scheme. Kidd said that he and Frank have a “difference in philosophy” which now has Frank banished from the sidelines of games and practices all together.

Yep…things are just peachy in Brooklyn.

All in all because of the dynamic of the East these two teams have ample time to rally.  Whether the battle cry is #KnicksTape or #HelloBrooklyn, the bigger picture needs to stay in focus and that has nothing to do with their hatred for each other or the battle for New York.