You are here: Home / Basketball / Breaking the Silence: Three Destinations for Kawhi Leonard 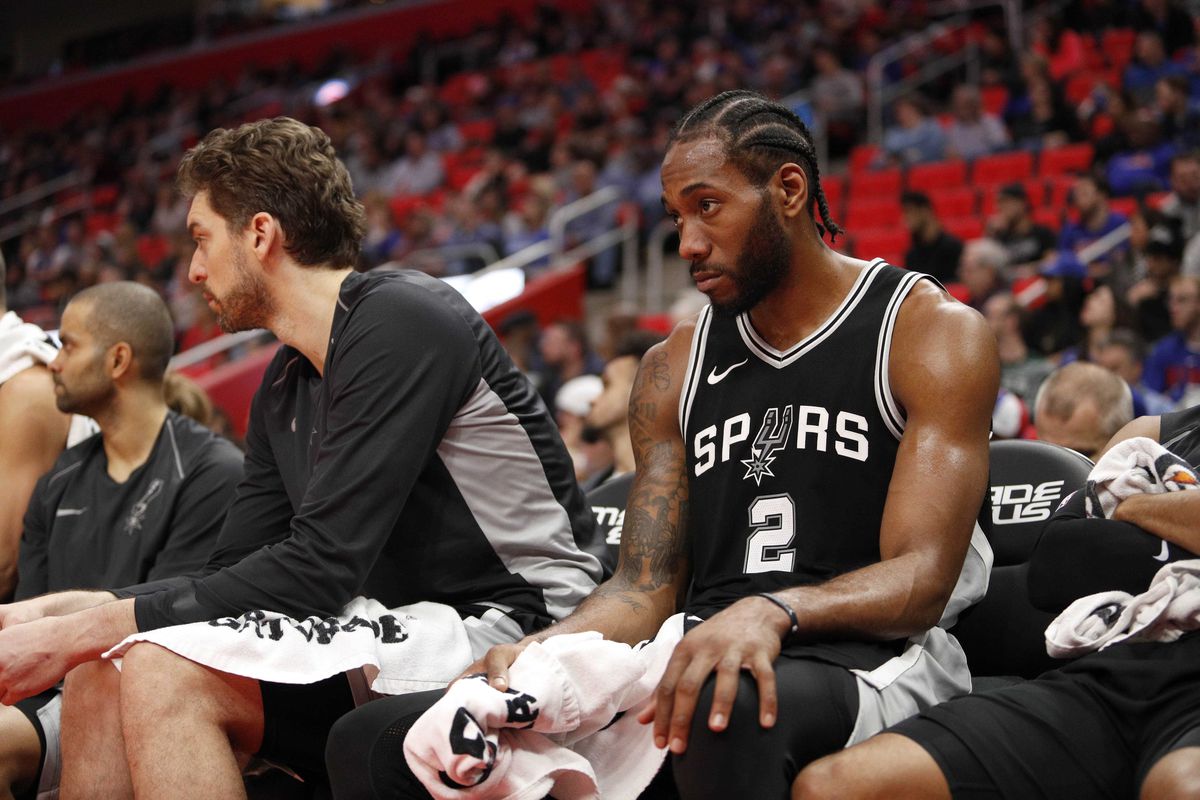 In four years Kawhi Leonard has transitioned from being a Finals MVP to a man whose legend precedes him. Since suffering a seemingly incurable quadricep injury and missing all but nine games of the 2017-18 campaign, all bets are off that Leonard will earn a San Antonio Spurs “Supermax” contract.

A year ago, Leonard was effectively the Spurs’ golden ticket past the Golden State Warriors. Exactly 23 minutes and 54 seconds told a story of the Spurs upending the eventual champs. Leonard’s played time in Game 1 of the 2017 Western Conference Finals blew the doors open on a 20-point Spurs lead, but his injury – initially to his left ankle – left the Spurs without their Golden State Kryptonite.

Skipping past the endless will he, won’t he talk in 2018, the Spurs are left with a tough decision. Coach Gregg Popovich and current franchise face LaMarcus Aldridge have willed San Antonio to their 21st consecutive postseason appearance. But staring down the barrel of a quick, first round exit in the 2018 playoffs, it’s not the Warriors who had the pleasure of pulling the trigger. Its Leonard.

Somewhere between private workouts with his snarkily monikered “group” and San Antonio, Leonard has contributed nothing but consternation for a team that relies on player development to secure wins. Working to hit 100 percent to make his grand reentrance is an admirable goal, but one that clouds the Spurs future sight. Leonard is under contract until 2020, and the Spurs could have every intention of extending it with a supermax deal. But in the event the robotic reign over the river walk is over, where might Leonard end up?

Competitors in the ever-heated Western Conference, the San Antonio Spurs would be suffocating themselves by sending Leonard to another team out West. At his best, Leonard is an elite wing. He’s capable of morphing to cover any position, pace the game with ballhandling and scoring, and play deaf to the jeers of an opposing crowd. Moving on from Leonard is an immediate downgrade for sure, but Popovich’s ability to win by committee make the Washington Wizards an amicable trade target.

Swapping Leonard and Derrick White (trade fodder) for Otto Porter Jr. could prevent the Spurs from having to rewrite their offense. Porter’s balanced game, which features a healthy number of catch-and-shoot attempts (41 percent of his attempts), slots into the Spurs’ recipe for ball movement. San Antonio assisted on 58 percent of their made baskets, a slight dip from the two preceding seasons, but good for a team without a player averaging more than 3.5 per game.

As a higher prioritized option, Porter could blossom to production levels that rival peak, near-all-star Rudy Gay. And, unlike Kawhi, the growth of Dejounte Murray means Porter can play to his strengths without requiring an emphasis on crunch time ballhandling.

For Leonard, joining the Wizards means transforming a marginal playoff team into an instant contender. His presence immediately improves the Wizards bench since the trio of Leonard, John Wall and Bradley Beal wouldn’t need to play every waking moment together. Leonard’s athleticism, should he regain it fully, covers for troubling guard matchups like Ben Simmons while providing an appropriate defensive option for athletic wings like Giannis Antetokounmpo in the East.

Popovich has made it abundantly clear that he has no intention of trading with the Los Angles Lakers. However, that doesn’t exclude Los Angeles’ second-best team from the trade equation. Flipping Leonard for Tobias Harris is eerily similar to the Porter deal, but with greater offensive insurance. Harris had the best season of his career in 2017-18, and his raw numbers increased even though he played second-fiddle to Lou Williams in Los Angeles.

Though Leonard is admittedly a better passer than Harris, the two share near equivalent usage rates (Harris 21.8 to Leonard 22.5) over the length of their equally long careers. Digging deeper to compare their last played full seasons, Harris stacks up to the challenge of replacing Leonard. Per Basketball-Reference, Harris equips a better 3-point shot (41.1 percent) and an effective field goal percentage just .6 percent shy of Leonard’s 2016-17 mark of 54.1 percent. On defense however, Leonard’s absence would be apparent. Harris, though a lengthy and athletic defender in his own right, lacks the cutthroat defensive instincts that earned Leonard a stellar defensive resume. To Harris’ credit, his defensive assignments were upended by Andre Drummond and DeAndre Jordan’s interior work, meaning Popovich’s watchful eye could mold him into a successful stopper.

In his hometown Los Angeles, the stoic Leonard could experience his career’s next renaissance alongside Williams and potentially Jordan. The inside-out coverage provided by a tandem of Jordan and Leonard would decimate teams like the Houston Rockets, who require hot shooting and lobs aplenty. The city would also welcome Leonard’s homecoming, which would potentially create an intracity showdown should the Lakers secure a top-notch free agent as well.

For the Spurs to continue their history of success, keeping a healthy Leonard out of the West is imperative. Sending him to the Bucks addresses that issue, while offering a return with immediate impact and potential. Acquiring Khris Middleton and Thon Maker in exchange for Leonard can serve both of those ends. While his 3-point shooting percentages don’t jump off the page, Middleton can get hot. In the playoffs alone, he’s shooting 60 percent from three from a combination of well covered and wide open spots. Coupled with his seasonal average of 51.7 percent from the floor, Middleton could sit well in an offense as fluid as San Antonio’s. Maker futureproofs the deal for the Spurs, giving them a gamble for an Antetokounmpo carbon copy.

In the East, LeBron James reign seems to be losing momentum, as teams with better defenses have figured out how to circumvent his autocracy. Leonard on the Bucks turns an already lengthy lineup into one that rivals the tallest oaks. A front court of Antetokounmpo and Leonard would invalidate the need for a true center on defense. On offense the duo can take turns dissecting the paint off the dribble, freeing up shooters or tiring out the victims of their assault. With similar skill sets, this trade may incur growing pains, but as consummate professionals, the Antetokounmpo-Leonard pairing could steer the NBA away from its 3-point trajectory.

However you slice it, trading Leonard is a gamble for the Spurs. He’s exceptional in a league filled with unicorns. Replacing his production and sheer fit with the Spurs as an organization is a heavy task, especially given San Antonio’s proclivity for player development. Leonard is supposed to finish his career with the Spurs, a revival of the strong silent efforts of Tim Duncan and David Robinson before him. Of course, any right-minded team should jump at the chance to acquire Leonard. Whether they can is another question that falls on San Antonio’s shoulders.