You are here: Home / Basketball / Brooklyn Nets center Brook Lopez likely out for the season with foot injury 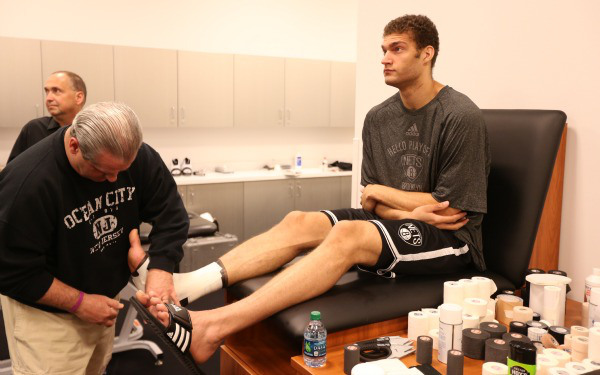 It started off as a careless whisper that people hoped was inaccurate. Gary Tanguay of CSNNE.com reported the following:

NBA source tells me Brook Lopez of the Nets is done for the year. Broken foot. East continues to get worse. #celticstalk

Being that Gary is a Boston Celtic’s guy, while respected, people wanted to hear it from more Brooklyn-affiliated sources. And then things were confirmed…

“@HowardBeck: : Confirming report that Brook Lopez broke his foot and is out for the season.” & the Hawks can swap 1sts with the Nets. Wow.

Lopez has had foot trouble for quite some time and this news is devastating to a team that was blaming health as the primary reason for their slow start. The Nets had managed to play 500 ball over their last 10 games but had lost two straight and have a challenging stretch of games ahead of them.

The Net’s have some options in terms of the rotation as Andray Blatche could slide in at center as he often has when Lopez misses time. They can also move Kevin Garnett to that spot and opt to space the floor with the sharp-shooting Mirza Teletovic or insert the rebound-hoarding Reggie Evans.

Still neither option replaces Lopez and his 20.7 points, 1.8 blocks and 56.3% shooting from the floor. Deron Williams, Joe Johnson and Paul Pierce will all have to share the load. Andrei Kirilenko is also due back at some point so this team should still be able to compete in the brittle Atlantic Division. Despite people already writing them off.

Still an interesting tidbit as noted in the tweet above…if the Nets do miss the playoffs the Atlanta Hawks have the right to swap picks with them. That would just add insult to injury. It’s cruel world for Brooklyn these days.