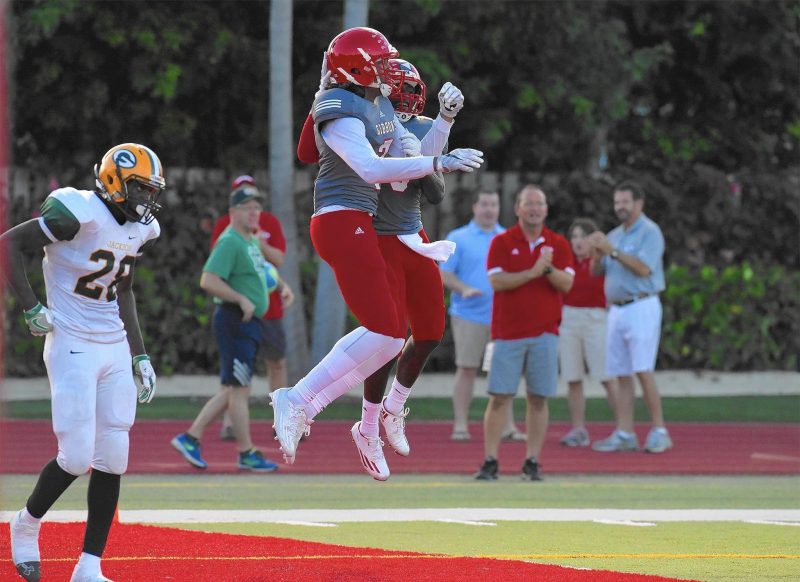 Cardinal Gibbons sophomore quarterback Nicolas Scalzo shredded the Miami Jackson defense with his ability to scramble and throw under duress to lead the Chiefs to an easy victory over the Generals 36-7. Miami Jackson defeated number 2 nationally ranked Booker T. Washington in the previous week setting up this public school vs. private school and Dade versus Broward matchup on the home field of Gibbons. Despite the hype entering the game it was not much of a contest from the opening whistle.

“Nobody thought we could come out and do what we were doing but we proved that we can play with anybody,” said Scalzo. “Now we just have to stay focused and take each game week to week.”

Before the opening whistle Jackson was penalized for taunting Gibbons in pregame festivities–it was all downhill from there for the Generals. On the first drive, Gibbons marched forward 64 yards down the field to score with a touchdown pass to James Bostic III. Jackson’s first drive moved completely backward ending with a bad snap on a punt that would lead to a Gibbons field goal.

The Scalzo-Bostic combination would connect again with a 41-yard touchdown throw and catch that would ignite the home crowd momentarily. The play would be brought back because of a holding call. Lightning, which could be seen in the distance several times during the game, would strike twice on the field as Scalzo hit Bostic again for a 41-yard touchdown strike..this time no holding penalty would save the General’s defense. Scalzo would finish the half with another touchdown pass to Joshua Rito making the score 24-0 at the half.

All of Scalzo’s throws seemed to connect with him throwing outside the pocket. “After every practice we run a scramble drill that works a lot. That’s where I have an advantage over someone when I am outside the pocket.” said Scalzo.

The defense for Cardinal Gibbons solidified the victory by taking advantage of four Jackson turnovers in the 3rd quarter. Maxwell Worship from Gibbons would drop an easy interception over the middle that hit him in the hands. Worship would not make the same mistake twice. On the next play Worship not only made the interception but would return the ball to the endzone to end any possible comeback by the Generals.

Jackson was unable to convert on several 4th downs during the game and seemed to shoot themselves in the foot with several penalties including the first before the opening whistle.

“We played good enough in spurts, I am proud of our team and proud of our guys,” said Gibbons Head Coach Matt DuBuc. “Give all the credit to the kids and my coaches, they did all the work. “We’ve got an off week next week and then we’ll get right back to work.”