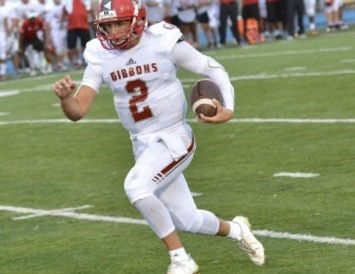 The Cardinal Gibbons defense carried their team to a district win over Coconut Creek 24-0 Thursday night. The Chiefs of Broward committed 195 yards in penalties but managed to do enough to get the shutout totaling 5 sacks and forcing four turnovers.

“I’m happy with how our defense played. Defensively we played well. Offensively we just couldn’t click,” said Head Coach Matt Dubuc with a defeated tone. “We just didn’t focus the way we should.”

The Chiefs were able to convert their first drive to points with an 80-yard drive that ended with a one-yard touchdown rush by Tajai Davis. In the second quarter, junior quarterback Nikolas Scalzo found Lavontae Decius on 24-yard pass that he seemed to deflect off of the defender and into his hands. Gibbons took a 14-0 lead into halftime.

In the second half Scalzo lead his team into the redzone once again. He almost punch it in for his team but actually had the ball punched out at the goal line. Chiefs would settle for a field goal to make the score 17-0.

“I think we didn’t have the focus that we should’ve had. We seemed to linger on plays we should of made,” said Coach Dubuc. When a few things went wrong we were not mentally tough enough to get over those things.”

Davis would score a second touchdown in the fourth quarter from three yards out that completely put the game away for Cardinal Gibbons.

“We won the game that’s number one, but too many penalties. You can make a million excuses for how we played but we have to do a better job if we want to go where we want to go.”

Chiefs are ranked as the 5th highest team amongst teams from Dade in Broward in the state according to MaxPreps and play another district foe in Miami Jackson next week Tuesday. Coach Dubuc eluded that his team may be looking ahead to game with American Heritage who is currently the 3rd highest ranked team in Florida. Coconut Creek will look to score some points against Hallandale next Thursday.