You are here: Home / Football / Carol City Ousts Dillard in First Round of Playoffs, 47-8 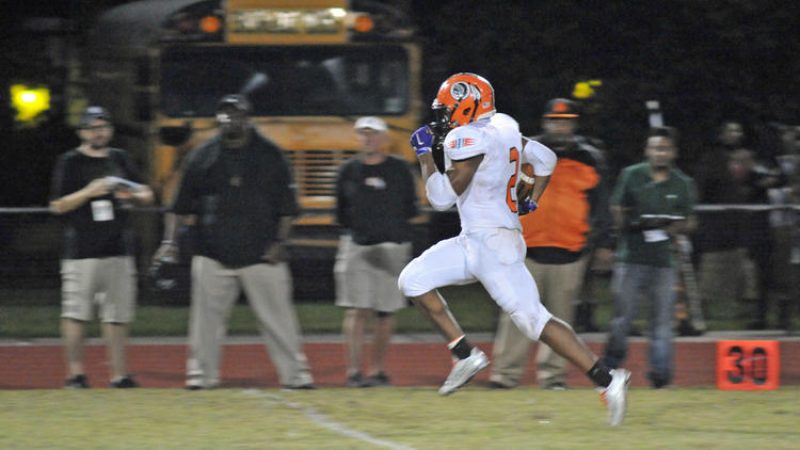 The impressive defense of the Carol City Chiefs dismantled the Dillard Panthers on a perfect night for football in Fort Lauderdale to open the 6A high school playoffs. The district, which is considered to be one of the toughest districts in the country showcased a Dade vs Broward matchup that was not much of a contest from the opening whistle.

The crowd at Otis Gray Jr. Memorial Stadium saw the Chiefs opening drive march 50 yards and plunge into the end zone on a 3-yard dive by Camron Davis. That drive was a sign of things to come as the Chiefs balanced offense seemed unstoppable at times led by junior quarterback Marlon Smith.

Smith spread the ball around to many weapons throughout the night. Smith connected with Victor Tucker twice on touchdown passes for 17 and 21 yards in the first half.  One of his best throws of the evening was a gorgeous deep ball to Naytron Culpepper for 46 yards.  On the same drive Smith would power his way through the goal line with 11 seconds left in the 2nd quarter to close out the half with Carol City cruising 27-0.

Davis would have a great day running the ball scoring 2 touchdowns despite battling the flu.  His second touchdown a 47-yard scamper to the end zone on the first drive of the second half continued to demoralize the Dillard’s defense and once enthusiastic crowd.

“I’m hungry, every game I’m hungry,” said Davis.  “I give thanks to my o-line.  I try to be the first one to practice and the last one to leave.”

Davis would have had a third touchdown, but that one was called back because of a holding penalty.  Penalties have been a major concern for the Chiefs all season and they can ill afford to commit penalties in the second round of the playoffs against Miami Northwestern next week.

“These penalties are killing us,” said Head Coach Aubrey Hill.  “We keep trying to address it, and we need to find out how we can improve in that area.  When you play against a good team it’s going to get you beat.”

Northwestern beat Carol City 19-14 at Traz Powell Stadium earlier this season.  They would also dominate their opening playoff game beating Boynton Beach 38-0. One of these teams seasons will come to an end next Friday night.

“We know we are playing a good team and we feel we have a good team,” said Coach Hill.  “Those kids that play the game, they’re ready for it, we just need to make sure we have a good game plan. Both teams will be ready.”