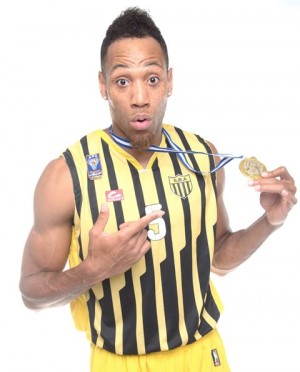 The road to the NBA isn’t a straight line and can be acrimonious no matter how talented one may be. Former Wichita State standout David Kyles is a high-character individual with skills on the court but he has spent the majority of his post-collegiate career playing for teams overseas. Kyles doesn’t maintain a pungent demeanor and has a life that that enriches him outside of basketball with a focus on his family and deep-rooted commitment to building his community. He’s working on his game, being a dad and contemplating his next professional move–which may see him stateside as early as this upcoming D-League season. I had a chance to wrap with Kyles as he touched on life overseas, being a family man and his favorite rap battles of all time.

Shaw Sports: So something I like to do when I talk to guys is give them an opportunity to explain who they are before I get into specifics. Who is David Kyles and what is important for people to know about him?

David Kyles: I’m a hard worker. A family man who’s strong willed and a fun guy to be around as well. That’s kind of me in a nutshell.

So you have your own hashtag ‘#KylesCampaign’. What is the meaning behind that?

Kyles’ campaign came about as I was thinking about my childhood and how I never had the opportunity to go to camps to increase my abilities on or off the court. It’s for the less fortunate people that can’t afford to go to these things. Not only that, I want to eventually get it to a level where we raise money or we’re sponsored by the government. It’s something that I want to help everybody in the community–all races and skin colors. I want to bring back the American people back to a sense of family. We’re all in this together.

So it’s more community building orientated or is it going to focus on kids with illnesses?

I think that’s a great idea. I wish more athletes had that whole mantra of wanting to give back. But I want to focus now  a little bit on the basketball side of things. You had a pretty successful collegiate career. What were some of the standout moments for you at Wichita State?

Ah man. I’d say the most memorable is this one specific highlight that everybody loved–I dunked on this big man, his name is DeAngelo Casto. I dunked on him in Madison Square Garden in my junior year during the N.I.T. championship run that we had. It was pretty amazing. My mom was at the game and it was the first game she came to outside of Wichita so it turned out great. I also remember we played against Kemba Walker and Kawhi Leonard and I think I had 18 points against those guys in limited minutes.

When you left college did you work out for any NBA teams before heading overseas?

No I did not. I was supposed to work out for one team but I got the information really late and things didn’t work out. But it’s OK, I’m not harping on it or anything like that. When the time is right it will definitely happen again. Right now I’m connecting with the right people and talking about having some workouts. I think this time next summer I will be OK.

That’s great news. A lot of guys who play overseas talk about a change in their world view. How has playing overseas opened your view of the world?

Man it’s totally different overseas there in Europe. It teaches you how to grow up faster. It’s not the same when you’re used to having your family down the street and now there’s an ocean between you. With all the people speaking different languages it makes you ask yourself as soon as you get there if this is something you really want to do. A lot of people get home sick very quickly but Wichita State prepared me mentally, not just for basketball but life. I have the mindset to go where I need to go and to do what I need to do. It’s turned out good for me so far and I’m working on getting back but it’s not an easy route like some might think it is.

When the only person that understands you is you but you good either way…. pic.twitter.com/G79SPCB6NP

Are there cities over there as Americanized as some say? Is it hard to get some of your favorite things there in terms of food and clothes?

Well I’m more of a home cooked meal type of guy and my family has a soul food restaurant in Dallas called the South Dallas Cafe. I can’t duplicate that food anywhere overseas, that’s the only thing that kind of irks me (laughing). Even the McDonald’s tastes different. So I try to keep chicken and burgers around so I can cook things on my own to keep me grounded and close to home

What city/country is your favorite and why?

Favorite one thus far would have to be Greece. The people there, the culture, the scenery, the islands are all amazing over there. They are great people and I love it every time I go over there.

There are some reported issues with racism in certain leagues and countries. Have you ever experienced or seen anything negative and how did you handle it?

Well people have to understand that people over there can be kind of rowdy. During these games it’s not like the NBA where you bring the family and everybody’s happy. The fans are really into the game, like it’s a way of life for them. There are a lot of people living in poverty and the games are a way for them to come together. So in the games there are fire works going on and big flags and sometimes fans spit on players if they’re close enough. It’s crazy man it’s not easy to play in an atmosphere like that.

You say things aren’t like the NBA but how engaged in the community are some of the European teams?

Oh yeah. When I was in Cypress this past season we were at a fundraiser event with some of the other top guys where we helped to raise money for the Cypress team go to the special olympics in L.A. It was big deal with a lot of sponsors and we took pictures with the kids–ate with them and talked with them. We did a lot of basketball camps and kids would see us out–maybe in the mall and I would say “hey let’s go to game room.” I’d play a couple games with the kids and they loved that type of thing. It goes a long way and the kids would go back and tell their parents and then the parents would love the team even more. I love every bit of it–I’m big on kids and things like that.

Making a difference off the court and you’ve done well on the court there. You were an All-star and on the Cup winning team. What does it means to be recognized for your play there and can you explain what winning the cup means?

Well the Cup is kind of like a tournament before the playoffs… Normally if you win the Cup, the following season you get to move up within your organization. There’s Euro League, Euro Cup and Euro Challenge and all of these are different leagues within Europe but they are the top leagues. So next season my Cypress team will be able to compete in Euro Challenge. But for the All-star thing it was a fun time for my first one. I thought it was pretty cool and it made me wonder what they’ll do next year.

What’s the first thing you do when you come back to the states after a season abroad?

Ha, the first thing I do when I leave the airport is look for a Smashburger. I love Smashburger, I can’t tell you how much I love it. But for real when I get home I try to see my son as quick as possible because like I said, my family is big for me. After that it’s about finding a gym so I can start working out in the offseason.

You are still so young. Do you still seek an opportunity back in the states in the NBA or D-League?

Yes the more people that see me play between coaches and agents have said that I should do the D-League this year. It’s definitely been on my mind heavy this whole summer and coming up pretty soon I’m going to have to make a decision on the D-League. Or maybe I get presented with something else or I go overseas.

They don’t make it easy but I will find a way #DK5 #BasketballLife #EuroBasket #BallisLife #TheStruggle #WillPower pic.twitter.com/ykyPogH2gf

Is there anybody you compare to currently in the league?

I’m kind of a mix between Stephen Curry and Russell Westbrook.

Yeah, I have a 6’11 wing span. I’m 6’4, I love playing defense but on offense I’m an all-around player. I shoot the three very well with crazy range and I have a decent handle. I’m a team player that just wants to win at the end of the day.

How has your game evolved the most since college and what are you still working on?

Right now I’m transitioning from the shooting guard position to the point guard position. If I play in the NBA I know I am going to play some shooting guard because of my scoring and ability to defend the bigger the guards. But I want to play point guard–I think I have a huge advantage there because my team would be able to have more scoring and I can guard the shorter guys. I just think it would be a great situation for a team to have a guy that wants to play defense and wants to make sure his teammates are happy. A guy who wants to do certain things even if it doesn’t involve him–just do winning things on the court.

A couple quick hitters before you go…Toughest player you played against in college?

Toughest player I played against in college would have to be Kemba Walker.

Toughest player you played against overseas?

So is your favorite current player also Kobe Bryant?

Who in the NBA currently would you most want to play one-on-one against?

Biggest influence on you basketball wise?

Biggest influence outside of basketball?

Oh I have to go with my boy Drake representing for the light skin brothers (laughing).

If you weren’t a basketball player what would you be?

Quarterback in the NFL.

Secret or not so secret talent you have?

That I could be a quarterback in the NFL (laughing).

The secret is to have no secrets… pic.twitter.com/Es2dD6tLU7