You are here: Home / Baseball / Clearly the Fielder/Kinsler trade has one big winner…the YANKEES! 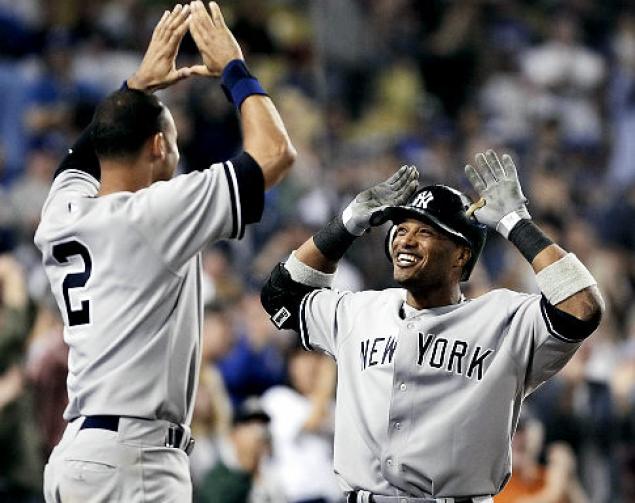 Who won the Prince Fielder/Ian Kinsler mega-deal? That was the question on everyone’s lips from the second it was announced. The media voiced their opinions. Baseball fans debated amongst themselves. Who won the deal? Was it the Texas Rangers who gained the big time lefty bat they lacked in 2012? Or was it the Detroit Tigers who now have more financial freedom for the next seven years? Was it a win-win? That is the argument made by many. This debate will rage into the 2012 season, and likely beyond.

However, if you want one clear winner today, then you may want to look at the New York Yankees.

Yes I know it is an odd idea. Obviously, the Yankees played no part in the deal. Still the shock waves of that trade have made it all the way to the house that Ruth Built. Less than seventy two hours after the huge deal between the Rangers and Tigers, All-star catcher Brian McCann signed with the Yankees for 5 years/$85 million. That is not a coincidence. That is an aftershock.

Before Wednesday’s trade McCann had two big time (and big money) suitors; the New York Yankees and the Texas Rangers. The reasons the Yankees wanted him were obvious. McCann was made to order for them; big time lefty pop, in that stadium, at a premium position. Those same exact things can be said for the Rangers. Yes, there were other teams who wanted McCann’s services, such as the Colorado Rockies, but the Rangers and Yankees were perfect fits. At least until the Rangers acquired Prince Fielder. Fielder instantly filled their need for lefty power and he also absorbed a good chunk of their payroll. While the Rangers aren’t afraid to spend, they likely only had enough resources for one big money indulgence. With the Rangers out of the picture, McCann going to the Yankees was almost a forgone conclusion.

Yet the Yankees good fortune does not stop there.

Their biggest priority this off season is resigning their All-World second baseman Robinson Cano. There isn’t a team in major league baseball, outside of Boston, who wouldn’t want such a talent. However, there are only a handful of teams who can truly rival the Yankees for his services. Cano will be out of the price range of most squads and he will almost certainly want to play for a contender.

One of the few teams that fit Cano’s likely criteria was the Detroit Tigers. Or at least they did before the trade. The Tigers were a key hit or two away from the World Series last year. And the pre-trade Tigers had no one playing second base for the 2014 season with Omar Infante going into free agency. Yes, it would have been a tough move financially for the Tiger’s to pull off, but do you doubt their moxy in such areas? The Tigers have proven repeatedly that they are unafraid to make the moves that they believe can bring a championship to Detroit. Cano could have very well been that move. Now the Tigers have an all-star second baseman of their own in Kinsler. While they have increased their financial flexibility, they have completely lost their need for Cano. If the Tigers are out of the Cano sweepstakes, the Yankees chances of re-signing him increase greatly. Possibly at a smaller price as well.

Lastly, remember how I said Cano would probably want to play for a contender? The Yankees had to become more attractive to him after McCann’s signing. Last season’s slippage in the standings had to look less troublesome after the acquisition. Maybe it is a small thing, nonetheless it is yet another plus for the Yankees.