You are here: Home / Featured / Football / In the Community / Colin Kaepernick, Terence Crutcher and a Protest That Became Much More Important 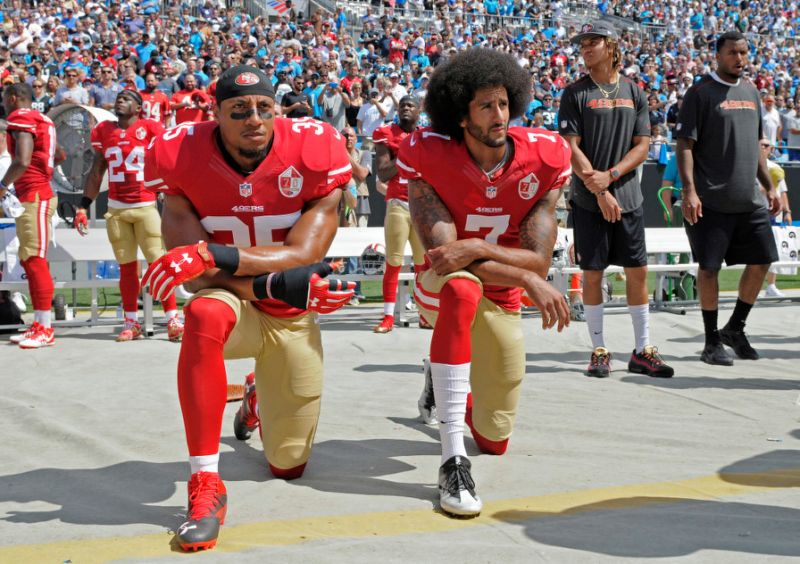 On September 16, Terence Crutcher, an unarmed African American man was killed by police while his hands were up in the air per the request of the officers. Crutcher was walking with his hands up back to his car and appeared to be getting ready to place his hands against his vehicle. With four cops surrounding him and a helicopter circling he was gunned down. This is just another addition to the many senseless killings of unarmed African Americans by law enforcement. It’s another hashtag on social media, another family and outraged community asking “why”. It also adds to the cavalier system that allows for police officers involved in these incidents to receive paid leave for killing an unarmed black man while the investigation takes place. These occurrences create further reasons to divide this country because a cop was trigger happy and careless.

During the National Football League’s preseason San Francisco 49ers quarterback, Colin Kaepernick, decided to protest the national anthem by sitting down. This was not an act of rebellion as most would think. It was an act to raise awareness to the oppression of the African American society faces from law enforcement on a daily basis. Kaepernick’s initial response to the media was:

I am not going to stand up to show pride in a flag for a country that oppresses black people and people of color…To me, this is bigger than football and it would be selfish on my part to look the other way. There are bodies in the streets and people getting paid leave and getting away with murder.

Without hesitation Kapernick’s actions started an uproar with the public and disapproval poured in over his decision. “How could he? If you don’t like this country, get out. How dare you disrespect the veterans and men and women who have died for the freedoms that you have”—those were just some of the comments that rained down on the veteran quarterback. Maybe in the beginning the people making those comments were right to be upset. There are thousands of men and women who have died for the blessings that we have. Kaepernick rebutted and said he did not mean to be disrespectful to the military but his actions are meant to bring attention to what he deems as injustice in America because of police brutality.

Now, let us fast forward from the preseason to today. Kaepernick is now joined by many other NFL players in protest and their cause has garnered more weight as evidenced by the death of Terence Crutcher.

To the people that disagree with his protest of the national anthem—have you ever considered if he kept quiet on this issue or went a different route? Would casual fans and society have just brushed it away? It takes serious conviction to challenge the anthem and while it probably wasn’t the best way to start the conversation… it was important that he STARTED the conversation in the first place. With an upcoming presidential election these are issues that we all need to be aware of, discussing and seeking solutions for.

The media and fans want our athletes, role models and celebrities to speak on social issues. They are supposed to actually care and know about what’s going on in the communities. But there seems to be an unrealistic expectation that their opinions need to match ours and they are vilified for actually having their own thought process. We’ve been teaching our kids to speak their mind since they were in grade school. But now, these adult football players aren’t being afforded the same privileges they were taught to embrace.  Now suddenly they should keep quiet, stay in their lane and just play football.

Why is it okay for people to chant “Make America Great Again” but wrong for someone to voice their oppression of minorities (especially blacks) in this country? Aren’t they both trying to create change? There were screams of disrespect to our armed forces because of the protests of the anthem, but silence from the public when the government vetoes bills to help veterans in need. We just praised Muhammad Ali after his death for fighting for the rights of African Americans but ridicule Kaepernick. Isn’t that being selective? Both at the core of their efforts wanted/want to see a change in a society—regardless of eras. 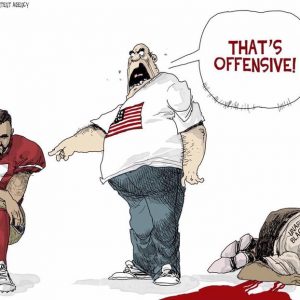 You may hate the manner in which Kapernick protested but it is his constitutional right to voice his opinion as it is your right to disagree. The way he started the conversation may have had initial shock value but we’re still discussing it to this day–five weeks later—because his protest is still relevant as a result of society’s injustices. Kaepernick has even made changes to the way he protested from sitting during the anthem, to getting on one knee after speaking with military veterans who supported him. In football, getting on one knee is usually used for three things; showing sympathy for an injured player, showing attention to a highly respected person (the coach), or because you’re tired. And at this point Kaepernick and the players who support him are tired and are showing sympathy to those who feel oppressed from police brutality.

We need to come to a middle ground in this discussion because racism, profiling, and injustice towards minorities does exist in the legal system despite attempts by naysayers to legitimize unsavory behavior by select law enforcement.  It’s hard to have mass shooting suspects taken alive (Dylan Roof, James Holmes, Jared Lee Loughner) or see male rapists (Kraigen Grooms or Brock Turner) receive ‘get out of jail free cards’ while minorities endure harsher punishments for lesser crimes. The aforementioned Caucasian subjects were all accused of greater crimes and properly taken into custody while unarmed African Americans are being killed in domestic disturbances and traffic stops. It is a PROBLEM that needs to be addressed.

With that being said, the wrongful deaths that have occurred don’t make it right for anyone to kill cops as a retribution or destroy their city in a protest. As much anger as people have as minorities, we cannot expect a change if we respond to violence with more violence. The only result that can come from that is greater division and modern day civil war. The only way we will see change in this country is if it comes from both parties and it’s done in a respectful manner. Racism may never die in this country, but we can help prevent division from progressing forward.

If lawyers, doctors, judges, and elite teachers all are expected to complete high-level education, why aren’t police officers held to the same standard? They are one of the main professions that deal with the public the most. It’s only fitting they have the proper education to do so. The Breakfast Club, a radio show in New York City, brought up a great point. Cops should go in the neighborhoods and learn about all races and actually understand the communities and demographics in which they work. This in theory could establish some early relationships and show they are not to be feared.

Also, cops need to hold other cops accountable. Their fraternal order doesn’t hold weight when innocent people are dying. There are a lot of great cops out there that are automatically thought of as a bad people once they put on a uniform now as result of the secrecy. Still, our law enforcement just like any other profession in our society, needs to be evaluated on an individual basis and not grouped or stereotyped. We need to stop the senseless violence on each other, be active in the community, and educate the youth about gun/gang violence more than we’ve ever had.

An open mind is needed when thinking of the Colin Kaepernick and the NFL players’ protest. The anthem is sacred and means a lot to a majority of Americans, especially those born in families who’ve come here for a better life. I get it, especially living in the South Florida area where the majority of my friends have parents and grandparents who came to America for a better opportunity. I understand the pride people have in this country because people are given the chance to grow into successful individuals. We’re spoiled that we live in a community that is a blend of all cultures.  But step into those rural areas where everyone is basically one race, the treatment is different. If you go in there looking different you will be judged. And that’s what Kaepernick is trying to change and bring awareness to. Not just blacks, but people of all races deserve the same equality from police and the judicial system.

People of color and different religions shouldn’t be judged from what they wear, size of their body or the pigment of their skin. Just because you may never feel oppression from the color of your skin, it doesn’t mean it doesn’t happen to someone else. Perceptions continue to be reality for many minorities and that is where the conversation truly starts.