You are here: Home / Featured / Fighting / Combat Sports Antiquated Weigh-in Process Has a High Cost and No Benefits 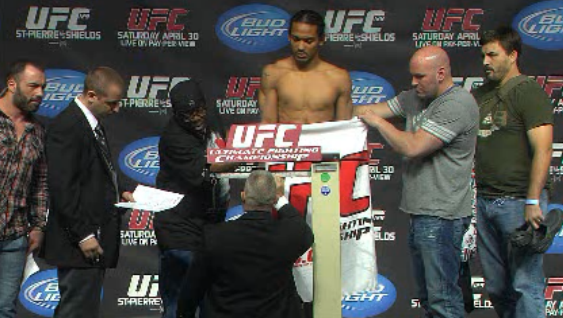 Weight cutting and the weigh-in structure in combat sports has to be one of the most dangerous aspects of any athletic competition.  Ironic because it isn’t even actually part of the competition, but part of the preparation.  Fighters train their bodies to be in peak condition and then in the week leading up to a competition completely abuse their bodies in a way few can comprehend.

For the uninitiated, fighters are broken into weight classes. Let’s use a recent example that happened on UFC’s The Ultimate Fighter 18 show in the 135 pound Bantamweight class.  Fighters can weigh whatever they want 99.9% of the time including during the fight, but at 2:00pm the day before the fight they must weigh in at 135, with a one pound grace.  If they miss weight they have two hours to try again or face a 20% cut in their purse and a possible forfeit.

Anthony Gutierrez was walking around the house a week before his fight in the high 150’s.  He was in the final week of preparing for the biggest fight of his career and his focus was not on training, or nutrition or preparing mentally.  Gutierrez had to try to lose approximately 25 pounds in a week.  The night before the weigh-in he was still 10 plus pounds overweight.  Many fighters go through this on the theory that the weight they cut can be gained back the next day for the fight.  Their is a prevalent idea that a bigger fighter has an advantage although this has not been factually or statistically backed up.  Gutierrez missed his weight cut by several pounds and had to forfeit.  Gutierrez actually quit trying the last few hours of his cut and his coach Ronda Rousey was so annoyed by him giving up that a few days later she lost 17.5 pounds in a day just to show that it could be done.  If he had made weight, which he didn’t, his focus immediately would have gone to gaining the weight back.

During the the weight cut fighters eat next to nothing, and drink next to nothing – the body experiences extreme dehydration.  Extreme dehydration has serious and sometimes deadly neurological consequences.  In addition to dehydrating the body, it depletes the fluid that surrounds the brain making it much more susceptible to serious injury.  Fighters voluntarily put themselves in this situation in the days leading up to combat.  It is in a word…baffling.  Baffling because the desired result of the weigh-in is to ensure the fighters are competing in a weight class.  The truth of the matter is that they are nowhere near that weight class come fight time sometimes competing 10, 15, even 20 pounds over the stated weight.

Wrestling has struggled with this “tradition” throughout it’s history.  After three collegiate wrestlers died in 1997 from weight cutting they changed their rules and the timing of their weigh-ins.

Boxing has had their share of weight cutting issues.  Perhaps the most famous death in my lifetime in boxing was the passing of Duk Koo Kim. He lost a long fight to Ray “Boom Boom” Mancini and his passing was at least in part to a large weight loss leading up to the fight.

Boxing has other negative effects as a result of the weigh-in process.  In a sport that is more controlled by the big name fighters and big name promoters, fighters can actually pay their way out of having to make weight.  Usually older, wealthier fighters pay off younger fighters who can’t afford to have fights cancelled.  In September 2013 Julio Cesar Chavez Jr. was scheduled to fight Bryan Vera.  Boxers can negotiate what weight they want to fight at.  The fight was originally announced at 160 pounds.  It was then slowly moved up eventually set at 168 heading into fight week. Less than a day before the weigh-ins it was apparent that Chavez would not even attempt to make the 168 pound weight.  Insulting everybody with the facade of a weigh-in, it had been negotiated (basically Vera paid off by Chavez) that the fight would be competed at a catch-weight.  Essentially the catch-weight was whatever Chavez decided to weigh in at which turned out to be 173.  That is 13 pounds over the contracted weight.  Chavez was able to get out of it in a nutshell because he is rich, reportedly paying Vera hundreds of thousands of dollars to go through with the fight.

Just a couple of months ago MMA fighter Leandro “Feijao” Souza died while cutting weight for a Shooto competition in Rio de Janeiro, Brazil.  Souza had taken a fight on short notice and needed to drop 33 pounds in a week.  He was losing the last two pounds when he had a stroke and passed away.  He was reportedly using diuretics.

One of the most well documented medical weight loss examples in combat sports was that of Gold Medal freestyle wrestling hopeful Dan Cormier at the 2008 Olympics.  Cormier was the team captain.  He stepped off the scale after a huge weight cut at the weigh-in and could barely walk.  He had started experiencing serious kidney failure.  He was not able to compete losing his chance at a medal.  Cormier is now a top level MMA competitor.  Interestingly Cormier is now cutting weight from 245 down to the light heavyweight limit of 205.  He has taken a slower, long term healthy approach to the weight loss as opposed to the drastic dehydration techniques often used.

So what are the solutions to the problems of weight cutting?  Part of the problem is that almost everybody in combat sports accepts it as just part of the deal and don’t even see it as a problem…it’s just the way things are. In my opinion it is a dangerous, outdated and completely useless process.  It serves no purpose whatsoever.  When you turn on a fight and they show the stats of the fighters – they are NOWHERE NEAR the weigh-in weights that are posted on the screen.

Solution?  Make the fighters weigh-in hours before the fight so they know they don’t have time to recover from dehydration techniques.  They would be forced to compete at the weight limits that they are actually fighting at.  If you weigh 170 at fight time you should be in that weight class, not dropping weight for weigh-ins and fighting at 155.  It’s absurd.

Secondly, when fighters are scheduled for fights weigh them in at intervals leading up to the fight to make sure that are certain percentage away from their fighting weight.  For example at 170, a week ahead of fight time fighters need to be within 5% (that would be 8.5 pounds) of their target weight.  This would stop any drastic weight loss strategies.  Skeptics and fans of the weight cutting process will say that won’t work because big fight promotions would lose big money if a main fighter failed to make weight right before a fight.  The truth is the UFC and big fight promotions have to look at what would happen if a fighter died or had serious injuries due to a process they enable.

After the NFL’s concussion class action lawsuit, the UFC should be worried about a bunch of fighters grouping together to sue claiming organ failure, etc. as a result of a practice the UFC knew was dangerous.