You are here: Home / Entertainment / Does Now You See Me merit it’s second life in the sequel? 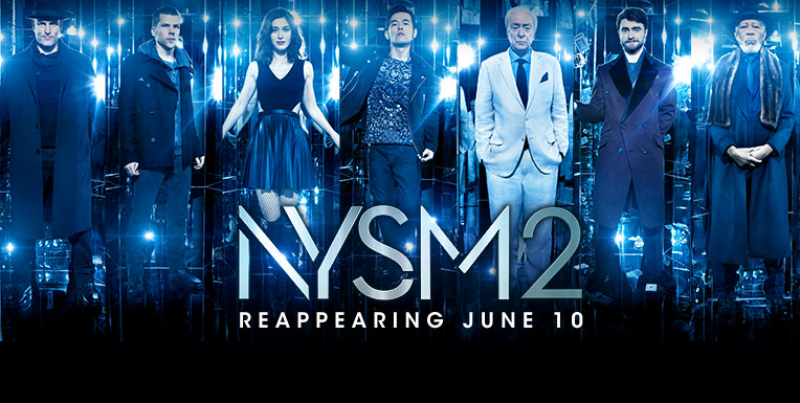 Let’s lay some ground work. I went into Now You See Me 2 with unbridled skepticism thinking how and why did this movie get a sequel. The first installment was a magically bad experience with a confused plot and special effects that didn’t quite live up to the hype of a movie that many–including me–wanted to be great.

Sins of the past were not repeated in NYSM 2 and that’s not to say all is forgiven but this is a sequel that betters its predecessor in most ways. The movie is digestible as a stand alone film but has heavy references to the first installment that help connect to the second’s plot. One may not care about some of the action and story lines within if they have no frame of reference to the characters’ connections to each other and back story…but you can get by without it.

The very Illuminati-esque mystique of ‘The Eye’ plays a heavy role once again and the film’s revenge-filled mantra permeates throughout. The plot is really centered around a team concept in which everyone plays their part and the main character is magic. If you wanted to be cynically sentimental, one could say there is a strong familial element throughout the film that also doubles as a main character or idea. The cast is talented and delivers believable performances with Mark Ruffalo, Michael Cain, Woody Harrelson and Morgan Freeman as arguably the biggest names. But the ensemble cast doesn’t really have a star in the film.

Jesse Eisenberg strays from his normally manic/sarcastic attempts at comedy and plays a mostly straight-forward role as a driven team member awaiting his chance to lead. I was relieved that he didn’t try to dominate the movie. Also on the plus side was Cain’s reprisal of Arthur Tressler. Yes, the trend of British villains makes another appearance in a movie but Cain added a sophistication that was enjoyable.

Lizzy Caplan (Lula) was an acceptable replacement for Isla Fisher as the film needed to maintain the female touch in a male dominated movie. Unfortunately her lines were often intentionally bad jokes that were supposed to be so bad they made you laugh anyway. They didn’t. And of course she had to play the love interest of a character in the film because that’s just what has to happen in a Hollywood movie. Don’t blame Caplan but blame the writing for her character. Harrelson has a dual role in the movie and while it’ was key to moving the film along, it was even more troublesome to consume than Caplan’s jokes. Let’s just say they could have found a different way to portray a pivotal character.

Where the movie shined was in the chemistry of the cast of good guys, especially from the first movie. NYSM 2 also did a great job of giving insight behind the ‘tricks’ & ‘illusions’ that otherwise would have left the audience saying “No way” even in a film based on magic. Suspending one’s usual sense of logic is expected in some films and while the ideas in the movie are definitely far-fetched, the explanations were appreciated and played well on screen.

The expected ups and downs are also there but aren’t easily predictable in terms of when they are coming or from who. That fact alone kept the plot moving and engaging. Overall it’s a well-paced, action-comedy that only has a few missteps. If you saw the first one you will probably think ‘why didn’t they do this the first time’ when seeing the sequel. I guess we all deserve a second chance.