You are here: Home / Basketball / Does the Jimmy Butler trade fix either team? 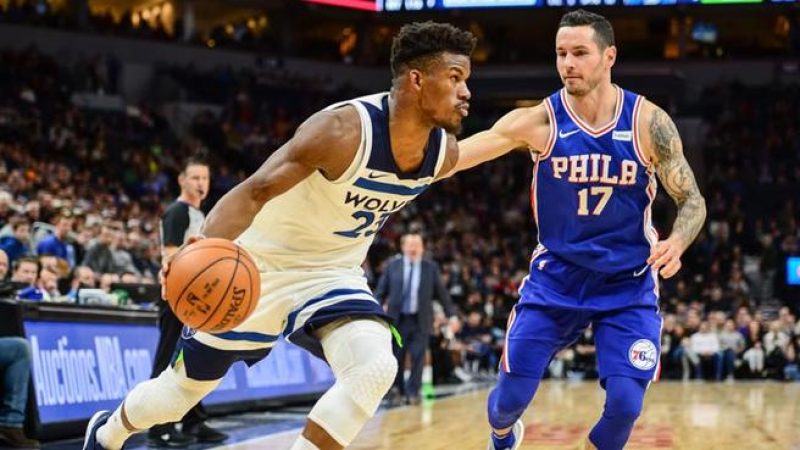 When Jimmy Butler not-so-backhandedly insulted everyone on the Minnesota Timberwolves—including himself—during an ESPN interview with Rachel Nichols last month, the world thought it saw the full extent of Butler’s powers.

But really, he was only getting started. Now, traded to the Philadelphia 76ers on effectively the one-month anniversary of his nationally televised, hoop-earring laden outburst, Butler has the chance to rain his patented brand of tough love down onto another franchise, one loaded with youngsters seeking to build on what now looks like a fluke 52-win season.

First thing’s first: give pause to the idea that there were any winners or losers in this trade. A deal for Butler was inevitable. Either the Timberwolves trade him for something or lose him for nothing in July. According to reports from ESPN, the deal was negotiated by Wolves owner Glen Taylor and Sixers owner Josh Harris. Minnesota head coach Tom Thibodeau, despite being no small part of Butler’s discontent, was nowhere to be found.

What wasn’t inevitable, however, was Butler landing in the City of Brotherly Love. In exchange for the four-time All-Star, Philadelphia relinquished starting forwards Dario Saric and Robert Covington, Jerryd Bayless and a yet to be determined 2022 second round pick. That’s a substantial offer for Butler, who can opt out of his contract and sign elsewhere in July.

Before we get to the point of debating whether Philadelphia has some trick up their sleeve that’ll keep Butler around next season—word on the street is that the team is at least somewhat confident that he’ll return—there are still 70-ish games of NBA basketball to play. That’s 70-ish games through which Butler’s true, wrecking-ball potential has yet to be realized. And you better believe he could destroy everything in his path.

Finally rid of the team’s biggest internal bully in team history, the Minnesota Timberwolves are still staring down the face of a potential battle ground. Currently 13th in the Western Conference, the Wolves are forced to retool in a contentious conference that has seen a reshuffling with the introduction of the 9-3 Denver Nuggets.

The path to the playoffs has never been harder for Minnesota, which has to spend the foreseeable future replacing Butler’s 21 points per game with a pair of stretchy forwards in Covington and Saric.

Covington is the exact type of player Tom Thibodeau loves. He’s an All-Defensive Team alumnus, who can take more than a few shots to the chest when he is caught guarding the paint. As Derrick Rose experiences a renaissance of his own, Covington provides a capable lineup swap for the departed Butler. He is far from the same, developed offensive weapon, but his ability to catch fire from 3 will continue the modernization of Thibodeau’s offensive, which has seen an increase in such attempts from last season.

Really, Covington is a perfect match for Thibodeau. He keeps his nose to the ground and has enough experience in playing alongside budding superstars that Karl-Anthony Towns and Andrew Wiggins should have enough room to work.

Saric, unfortunately, isn’t so blessed. Despite firing 3s at around the same clip as Covington, his toolkit is eerily similar to another ex-Timberwolf who decided to walk this summer: Nemanja Bjelica.

Bjelica, who has found a second life this season on the Sacramento Kings, left the Timberwolves this summer after his 3-point shooting was relegated to the bench by Thibodeau’s short lineups. On the rare occasions that he got to shine, like in March 2018, Bjelica could string together some respectable performances.

But as a defensive wildcard who wasn’t particularly successful in defending the post or perimeter, the Wolves didn’t bat an eye as he, ironically, signed an offer sheet with the Sixers only to renege and head to the Kings.

Here, Durant takes advantage of his quicker, longer first step as Bjelica fails to anticipate and overcome the Draymond Green screen just as he can’t redirect Durant away from a right handed drive to the rim.

Saric, who has similar defensive misgivings as Bjelica—not particularly well suited to the wing or post—will be weighed against his ability to contribute offensively over his defensive absences. Even if he continues to blossom as a shooter, being a defensive liability will resign him to the bench, especially in a six or seven-man Thibodeau roster.

Against a similarly talented Kristaps Porzingis, Saric stumbles on the more physically demanding assignments that send him into the post and he struggles with defending the pick and roll à la Bjelica.

The rest of Minnesota’s acquisitions, Bayless and the future pick, are more like non-issues than potential show stoppers. More important is the fact that Thibodeau wasn’t included in trade talks which effectively stripped him of his powers as team president, at least temporarily. Picking up Covington is certainly a Thibs-esque move but adding in Saric is effectively Taylor’s not-so-silent nudge that Thibodeau needs to rethink his rotation strategy if the Timberwolves will keep pace in the West.

Ultimately, no matter how exceptional the new acquisitions pan out to be, they don’t change the lingering wound opened by Butler. The Timberwolves identity last year revolved around the idea of team as supporting Butler’s role as a superstar. Now, the focal point shifts back to either Towns or Wiggins, who have to realize their team-leading potential if Minnesota will continue their streak of postseason appearances.

Butler’s departure should help, but unless Towns and Wiggins are ready to assume full control, the Ghost of Butlers Past will linger over Minnesota like the aurora borealis.

Butler’s Brings the Clippers to Philly

Forget everything you knew about the 2017-18 Philadelphia 76ers. The team once prided on 3-point shooting and stretching the floor—save for Ben Simmons and his still non-existent jump shot—has traded in their collection of perimeter spacers for an offensive roulette wheel.

Calling Butler a nuisance on this team before he even takes court isn’t fair. Offensively he is fine tuned in every area the Sixers could want. He’s a respectable 3-point shooter, knocking them down at a 38 percent clip. He has also proven a battle tested attacker, scoring on 70 percent of his rim attempts this season.

But having missed out on playing with a peak Derrick Rose in Chicago (until this season that is), Butler presents the team with the challenge of figuring out exactly how to defer to a pair of star players like Ben Simmons and Joel Embiid.

Good players figure this out. Paul George, once the alpha dog on the Indiana Pacers managed to fill into a pseudo-supporting role with Russell Westbrook on the Oklahoma City Thunder. Kawhi Leonard transitioned seamlessly into playing with the 3-point shooting point guard Kyle Lowry in Toronto despite having nothing of the sort in San Antonio.

Butler too can make the Sixers work, as his mix of on an off-ball talent will keep defenses guessing which of the newly formed big three will make a play.

But with a trio of first options in Butler, Simmons and Embiid, head coach Brett Brown must fully relinquish the idea of playing like the 52-win team from last season. Losing Covington and Saric after Ersan Ilyasova and Marco Belinelli left this past summer drained Philadelphia of its 3-point shooting. Where the Sixers could field at least two shooters at any given moment to provide targets for Simmons and Embiid’s outlets, now JJ Redick becomes the object of the Sixers’ 3-point affection.

Shifting away from their 3-pointer heavy philosophy from last year, Butler’s incorporation with the 2018-19 Sixers pushes the team’s closer to the Lob City era Los Angeles Clippers than the perimeter spacing Golden State Warriors.

In this setup, Simmons and Embiid play the roles of Chris Paul and DeAndre Jordan, respectively. Sure, Embiid’s offensive abilities outpace the catch and finish stylings of Jordan, but the foundation is effectively the same: a floor running big who can lock down the paint on both ends of the court.

Butler then, is the Blake Griffin of this throwback squad, particularly the 2016-17 edition of Griffin who added a perimeter game. On the last full Lob City season, the Clippers offense struggled with giving full range to Griffin, who previously resided in the post with Jordan, without compromising Paul’s directorship and Jordan’s positioning.

Now, Butler can fill in for Simmons in pick and roll sets with Embiid like Griffin did for Paul. Unfortunately, that puts an onus on Simmons to become a more effective off-ball threat, a tall order for someone with an ineffective jumper.

Simmons is most effective heading to the basket or utilizing his supreme court vision, but if he is occasionally annexed out of ballhandling his defender will have more opportunities to disrupt the set. With enough shooting this isn’t a problem, as Simmons can provide weak side screens to free up shooters.

But without those shooters, Simmons’ off-ball game will have to prioritize disruptive cuts and misdirection as Butler, Embiid and the rest of the roster attack the rim.

Suffice to say, Minnesota and Philadelphia are in for a brand-new world of hoops. As Butler inches closer to owning his NBA future again, his star power is still sending ripples throughout the league as teams prep to depose the Golden State Warriors.

The tirades may have been silenced and the DNP’s may have ended, but Butler’s one-man revolution in the NBA is far from over.