You are here: Home / Basketball / Dwight Howard and Carmelo Anthony seeking their next opportunity 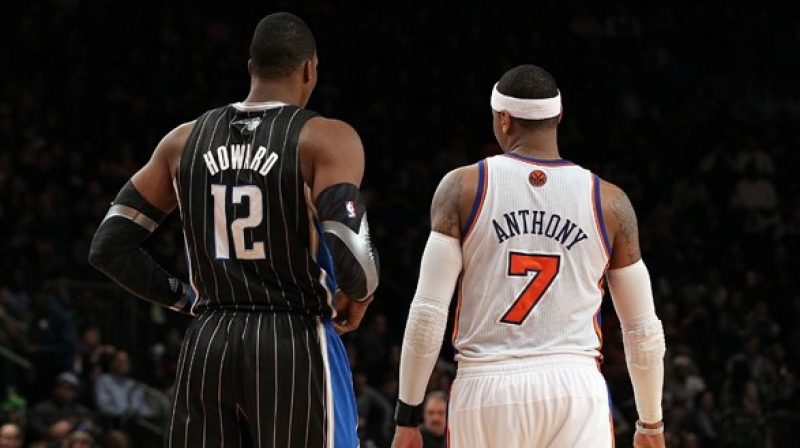 Carmelo Anthony and Dwight Howard have never been NBA teammates. However, their stories heading into the 2019-2020 season are unexpectedly intertwined. The future Hall of Famers find themselves without roster spots or viable leads for spots as the season approaches.

Consulting an online sportsbook and placing a wager on whether or not either wears an NBA uniform in October could be a fun bet. Both have done rare interviews this summer that peel back their complicated layers in hopes of showing their more mature side after spending most of last year out of the league. NBA Twitter has laid waste to their names for various crimes against basketball humanity and these interviews were attempts to clean up the smear campaigns.

Melo sat down with Stephen A. Smith from ESPN to explain his thought process and some of the hurt he’s experienced by getting uncerminously waived by the Rockets.

Anthony sites things that are bigger than basketball for why he’s not on a team but contends that all 30 teams can’t possibly have 15 guys that are better than him right now. It would appear he’s right on both accounts, but the former is like a led balloon to his hopes of getting back into the league. Players like Damian Lillard are starting to rally around the 16-year veteran who is clamoring for a chance at year 17.

But is Dame right? What teams should take a chance on a volume shooting forward who has struggled with an identity crisis?

Anthony is probably best utilized as a four in today’s NBA and if you are feeling froggy maybe he can play spot minutes at the three. With these factors in mind, Phoenix, Washington and Charlotte are low-end options that would allow him the greatest amount of playing time. The Hornets don’t really have anyone on their roster that Anthony would stunt the growth of with his presence making them the “easiest” fit. But Phoenix and Washington have stars in Devon Booker and Bradley Beal that they don’t want to rub the wrong way.

Finding a contender or even a playoff team for Melo is a little more tricky. A one-year stop in Brooklyn while the Nets await Kevin Durant‘s arrival from injury is interesting but probably only from a public relations aspect alone. The Utah Jazz added so many pieces already and don’t need to muddy their chemistry. The Miami Heat have shown interest in him previously but could he and Jimmy Butler co-exist?

That leaves the Blazers with Lillard who seems to be pulling for Melo’s re-entry into the league. Anthony could slot behind Zach Collins and right above Anthony Tolliver at the four spot in Rip City. With the league as wide open as it has been in nearly half a decade, Portland could put all their chips in with hopes that Anthony would bolster their bench.

Howard’s journey back to the league might take a circuitous route. The last four seasons have seen him with four different teams despite having solid statistics in two of those stops (Atlanta & Charlotte). Technically, he’s still a part of the Memphis Grizzlies after a summer trade from the Washington Wizards. But the Grizzlies intend to waive or trade him as he doesn’t fit what they are trying to build currently after the Grit and Grind area.

The eight-time all-star sat down with Kristine Leahy an opened about his mistakes and trouble last season off the court.

Howard’s reputation as a prankster and locker room albatross have haunted him right of a job currently. Coupling that with some peculiar off the court rumors and it’s easy to understand why teams are crossing the other side of the street when his name is mentioned. Howard has struggled to adjust as the game has progressed to almost mandate shooting and switchability from bigs. His bread and butter has always been the post and rim protection, and while those things are still useful, teams don’t want it if it comes with distractions.

Howard isn’t the defender he once was but that is still where he can truly help most teams. He’s always been a plus rebounder and an above average screener. Unfortunately, he’s already made his way through three teams where he’d be most useful in Atlanta, Charlotte and Washington. No reunions are on the horizon.

The Spurs are void of a true center and are already built around two-point assassins in LaMarcus Aldridge and DeMar DeRozan. Tripling down with Howard seems like overkill but it’s an option if they think Gregg Popovich could control his temperamental makeup.

LA’s newest powerhouse, the Clippers, are an intriguing option. Could the veteran center be a serviceable backup on the defensive orientated contenders?  The Clamp City Clippers would be even more formidable defensively with Howard patrolling the rim.

These two polarizing figures still have talent but finding out if the juice is worth the proverbial squeeze is what teams are asking themselves. It may take one or both of them going overseas for a short time to prove they are still hungry or an unexpected injury. Either way, it’s hard to imagine that Anthony and Howard will not find their way back to a roster before their careers truly sunset.