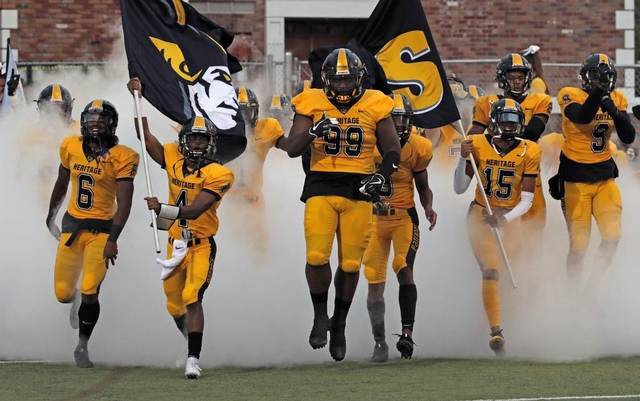 Welcome to the midpoint of the high school football season! We survived a potential catastrophic hurricane and had some make up games to catch up. We are all caught up now and we get back to a normal schedule. There has been a shake up in the pecking order so a competitive second half of the season should lie ahead. Enjoy Football!

1. American Heritage (Plantation) (3-0) – Heritage looks as strong as ever. Senior quarterback Cameron Smith is growing as a signal caller every week and their defense is arguably the best in the country. The Patriots had the week off last week as they prepared for a matchup with Stranahan this Friday at South Plantation High School. The following week Heritage takes on Cardinal Gibbons in the game of the year for the district.

2. Miami Central (5-1) – The Rockets flew to Las Vegas while Hurricane Irma ran rampant through South Florida and beat powerhouse Bishop Gorman in a nationally televised game on ESPNU. Central suffered defeat to the number two team in the country according to MaxPreps IMG Academy (Bradenton, FL) in the following week. They bounced back with victories over local foes Norland and Edison and now take on Blanche Ely (Pompano Beach, FL) on Friday night. The best team in Dade County has proven that they can compete with anyone at anytime at anyplace.

3. St. Thomas Aquinas (Fort Lauderdale) (3-1) – St. Thomas Aquinas’s lack of offense has finally caught up to the Raiders this season. They traveled to Arizona last week and suffered their first loss of the season by being shutout by undefeated Centennial (Peoria, AZ) 12-0 who now rank 13th in the nation according to MaxPreps. The loss dropped the raiders to 16th nationally. They host Deerfield Beach who ranks 146th nationally but are definitely one of the best teams in South Florida. The Bucks started the season with a 6-2 win over defending 6A district champions Miami Carol City. This is should be a defensive battle and I expect a tight low scoring game.

4. Cardinal Gibbons (5-0) – The Chiefs of Broward have simply been dominant on both sides of the ball outscoring their opponents 174-12. Of their wins, none were more impressive than the manhandling of defending 8A champions Miami Southridge 27-6. Gibbons has a bye week this week but are preparing for a potential program changing district game against rival American Heritage (Plantation).

5. Deerfield Beach (3-1) – The Bucks will have everything to gain in the game of the week against St. Thomas Aquinas. They have a strong defensive line that will cause some problems for the Raiders offense. Deerfield’s lone loss was to now 77th ranked St. Joseph Regional in New Jersey 44-21. Will their offense produce enough to win the game against local power Aquinas?

6. Miami Northwestern (4-1) – This team takes care of business week after week. Although the one blemish on their schedule thus far is to the number two team in the nation IMG Academy (Bradenton, FL) losing 21-0, the mighty bulls have looked strong with wins against Booker T. Washington (Miami) and Columbus (Miami). Northwestern will take a breather this week with no game scheduled but play a huge game next week against district rival Miami Carol City.

8. Miami Southridge (3-1) – After losing to Cardinal Gibbons week one, the Spartans reeled off wins against North Miami, Miami Palmetto, and Killian outscoring those opponents 109-13. There are primed to make a run for back to back state titles if they can beat Carol City Friday night.

9. South Dade (4-0) (Homestead, FL) – The undefeated Buccaneers will put their record on the line against North Miami Beach Friday in South Dade. They have maintained momentum from their opening win over Coral Gables and look to challenge district champion Southridge for the title.

10. Chaminade Madonna (Hollywood) (3-2) – Losses to the two best teams in South Florida isn’t terrible. The Lions looked inept against American Heritage (Plantation) but got back to business with smashing wins against Piper 52-0 and Blanche Ely 44-0. They need not to overlook a good Doral Academy team this Friday.