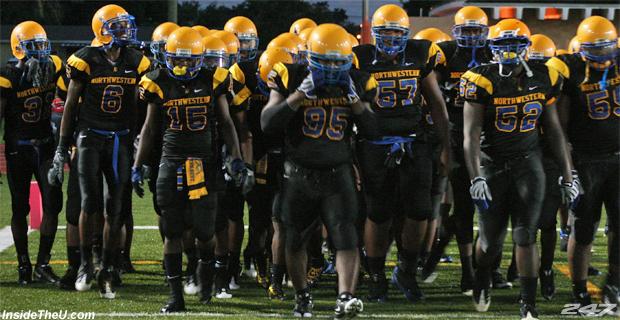 1.American Heritage (Plantation, FL) (5-0, 5A) – Head coach Pat Surtain’s team have the most impressive resume to this point with no blemishes on their record. Heritage blew the doors off of Liberty (Henderson, NV) 31-0 who currently rank second in the state of Nevada according to Maxpreps only behind powerhouse Bishop Gorman. They also dismantled Chaminade-Madonna 41-13. Those Lions ran away with a victory over Booker T. Washington last week 35-20. The Patriots handed Cardinal Gibbons their first loss of the season last week edging the Chiefs of Broward 23-19. They are simply a complete team with a dual threat quarterback Cameron Smith (@cannoncam), a strong running game that includes Miles Jones (@milesjones2018), Tyler Jones (@t_yjones) and Jordan Johnson (@24jordanjohnson), arguably the fastest receiver in the state in Anthony Schwartz (@anthony_flash10) and a stout defense averaging 8.4 points allowed.

2. Miami Central (7-1, 6A) – One could make a case that the Rockets are the number one team in the Miami-Dade/Broward County area. They are the most battle tested team having traveled to Nevada and defeated Bishop Gorman, beaten Chaminade-Madonna in convincing fashion 48-24, and took out local foes Booker T. Washington and Norland by a combined score of 42-29. Their only loss, on the road to IMG Academy the number 2 team in the nation 24-15. This is the closest that anyone has come this season to defeating the juggernaut that is the team from Bradenton, FL. The game of the week is their clash with Miami Northwestern this Friday night. The winner takes control of the district.

3. Miami Northwestern (5-1, 6A) – The Liberty City boys are looking to reclaim the glory of yesteryear by continuing their pursuit of a district title. The Bulls have quality wins against Columbus 24-7, Booker T. Washington 14-7, and Carol City 16-7 last week. There only blemish, shutout by IMG Academy 21-0. Northwestern is primed to make a state title run but it begins with winning the toughest district in the state.

4. St. Thomas Aquinas (5-1, 7A) – The offense has not looked as strong as previous years but the defense is strong enough to carry the Raiders to their fourth consecutive state title. St. Thomas opened the season with a grind it out 9-3 OT win over St. John Bosco (Bellview, CA) who currently rank sixth in the nation according to Maxpreps. Their other quality win came at home against Deerfield Beach. Raiders shutout the Bucks 14-0 behind a strong game from Nik Bonnito (@nikkkkbonitto).

Next Game at Boyd Anderson Friday @ 7:00

5. Miami Columbus (5-1, 8A) – These Explorers need to start getting some love for the teams they’ve conquered this season. Columbus defeated Booker T. Washington, Belen Jesuit, Miami High and Lake Gibson who have a combined record of 15-10 by a score of 109-49. Their only loss was to Miami Northwestern 24-7.

6. Deerfield Beach (5-2, 8A) – The Bucks busted out of the gate with a strong 6-2 win over defending 6A champion Carol City. They then traveled to New Jersey and were quickly humbled with a defeat to St. Joseph Regional who currently rank second in the state of New Jersey. Their other quality win, shutting out Dillard 29-0. They take on a descent Monarch (5-1) team but should not have too much trouble.

7. Miami Carol City (4-2, 6A) – The Chiefs took one on the chin last week to their rival Miami Northwestern and want to rebound as soon as possible. Their two strong wins were against Southridge and Norland. They combined blank both teams by a combined score of 65-0. Booker T. Washington will be no easy game but the Chiefs should get it going offensively and pull out a win. Don’t sleep on the Chiefs from Dade. All they would need is a win from Central this Friday and beat the Rockets next week and the district is theirs.

8. Cardinal Gibbons (5-1, 5A) – Gibbons started this season with a strong win over Miami Southridge 27-6. Since then their only quality win, against Coconut Creek 24-0. They played American Heritage tough last week only losing 23-19 but still seem to lack the respect they deserve. This week’s game against Hallandale may not do much for resume, but the Chargers should not be taken lightly if naysayers are looking to put respect on their name.

9. South Dade (6-0, 8A) – The undefeated Bucs have three quality wins. The opening win against Coral Gables was the first indication that the 2017 Bucs could be for real this year. Shutting out rival Homestead 20-0 and walking over North Miami Beach 37-7 are your additional indicators. They hurt some egos of teams on their schedule thus far but the future will tell just how good this team really is. They take on Miami Palmetto this Friday and should have no issues getting the win but we shall see.

T-10. University School (5-0, 4A) – The University School Sharks are undefeated and primed to make a run this year. They defeated Glades Central 13-7 and Monsignor Pace 27-22. They face another big test in Champagnat Catholic (Hialeah, FL).

Next Game vs. Champagnat Catholic Friday @ 7:00

T-10. Chaminade-Madonna (4-2, 3A) – Chaminade’s two losses are to the current top two teams in South Florida. Their two quality wins, edging Miramar 14-13 and blowing out Booker T. Washington 35-20 last week. I expect a competitive game here with a slight edge to Chaminade-Madonna.

Next Game @ Doral Academy Thursday at 7:00