You are here: Home / Featured / Fighting / Floyd Mayweather ready to prove he’s “The One” against Canelo Alvarez 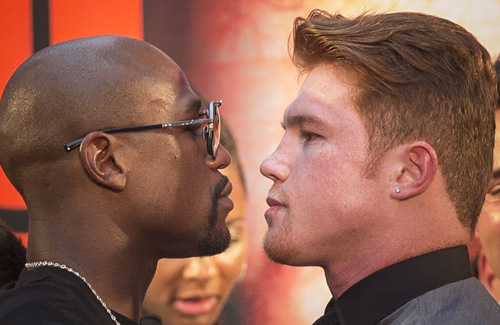 You can call him brash, cocky and a million other adjectives with negative connotation but at the end of them all you still have to call him the undefeated champion.

At least until September 14.

Mayweather has never had a stronger opponent than Canelo Alvarez  who he will meet in mid-September at the MGM Grand in Las Vegas. Boxing fans know this but most importantly so does Mayweather. He always trains hard but is more focused for this bout not only because of the skill of the opponent but also because its his quickest turnaround in fights in over 5 years.

Mayweather fought in May against Robert Guerrero and won an easy decision making Guerrero look like a shadowboxing opponent. But Alvarez is no ghost or figment of Mayweather’s imagination and the champ is fully aware of who and what he’s up against. Check out these statements he made at his media day an excerpt from ESPN.

He’s banking on his youth, I’m banking on my experience. I have a lot of experience in championship fights. Look at his resume, look at my resume and see what you come up with.

Clearly Floyd isn’t afraid of Alvarez, but he does have a certain amount of respect for the 23 year-old opponent that we haven’t seen in recent fights.  That’s a small win for Alvarez already but we will see who is the last man standing on September 14 and who truly is “The One”.