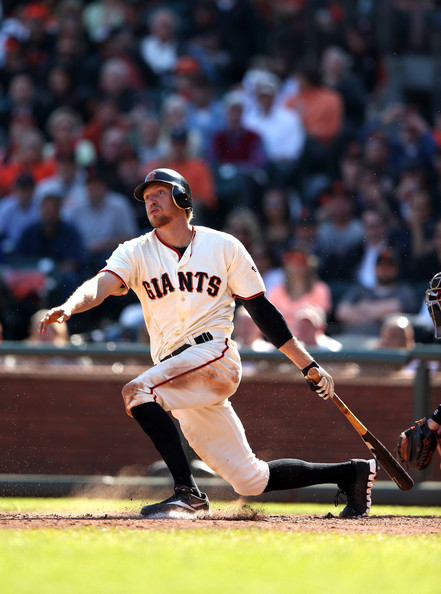 Weaknesses: Considered awkward by most scouts. Low output in postseason in his career. May be coming off a “career year”.

One may call this the “Curious Case of Hunter Pence”. Pence’s perceived value has fluctuated wildly over his career, even though he has been a model of consistency statistically. In 2013 Hunter Pence reached career highs in both home runs (27) and stolen bases (22), while hitting .283. He also had 99 RBI’s while scoring 91 times. These numbers, with the exception of stolen bases, fall in line with his career 162 game averages.

Hunter Pence re-signed with the Giants for 5 years and $90 millon dollars. Pence was likely to be the #3 outfield free agent available this off-season before he resigned, with only Jacoby Ellsbury and Shin Soo Choo being more sought after. Considering how much the Giants struggled offensively it seemed wise to resign one of the few bats they could trust. In addition Pence is considered a special player in the club house, in the San Francisco community, and among the Giants fan base. Still, an average of $18mil a year for a player like Hunter Pence seems a bit extreme.

Contracts likely looked at during the deal making process were Andre Eithier’s (5 years, 85million) and Jayson Werth’s (7yr, 126mil). One comparable player who’s contract seemed to be ignored was Nick Swisher’s (4yr,56mil). Both the Eithier and Werth contracts are generally considered bad deals for the signing clubs. Meanwhile, the Indians made a team friendly deal, as Swisher didn’t get the demand in free agency that most expected.

The Giants did not want to tempt fate by allowing the productive Pence to hit free agency. By re-signing him before he hit the open market they avoided a possible bidding war. The Giants probably did not like the limited alternatives if Pence signed elsewhere. Hunter became the hunted and San Francisco offered him a deal he couldn’t refuse. But one has to wonder, if the Giants could have and/or should have gotten Pence at a cheaper price. If they were willing to go to as high as 18 million, would they not have been better served letting Pence test the open market? It’s hard to see what other club would’ve pushed Pence’s price tag higher than what he signed for. The Giants, in effect bid against themselves. It will also be interesting to see if Hunter’s “unique” style of play holds up as he gets older. Will the flaws that scouts see within him finally affect his numbers as his natural abilities begin to fade?

Final Prediction: Expect baseball agent extraordinaire Scott Boars to use Pence’s contract as a base and get Choo and Ellsbury huge contracts. The contract may also affect the likes of Brian McCann, Carlos Beltran, Nelson Cruz and Curtis Granderson. It would not be surprising for McCann to look for an identical deal. Meanwhile Beltran will also likely be looking for a similar per year salary, even if for less years. By the beginning of the 2014 season the Hunter Pence deal may look like a steal. However in truth, it may have been the bad deal that set a very expensive precedent. The market is set, call it the Pence Effect.