You are here: Home / Football / From Starting QB To The Bench: Why Are So Many NFL Quarterbacks Going Down And Who Is There To Pick Up The Pieces When They Do? 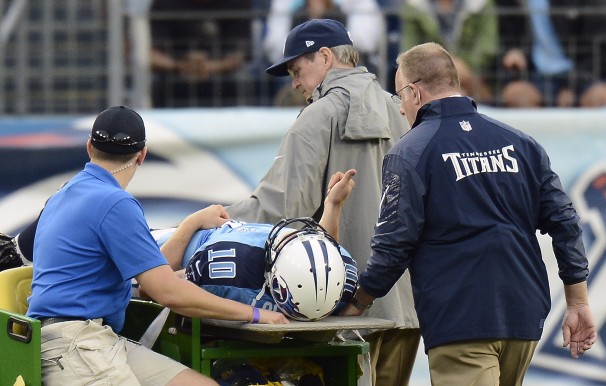 There are 32 teams in the NFL. They are broken into 8 divisions of 4 teams each. Through just 5 weeks of this NFL season each of these 8 divisions has seen at least 1 team have to turn to their backup quarterback. Yup, that is a true story. Out of 32 teams, 11 teams have had their backup play significant time in at least 1 game for various reasons. That is over 1/3 of the league. Sometimes the replacement is due to injuries, sometimes it is poor play, and sometimes it is due to the team being TOO good and getting up big. So just what is going on in the NFL… and what are teams doing to replace their most important offensive players once they need a sub? 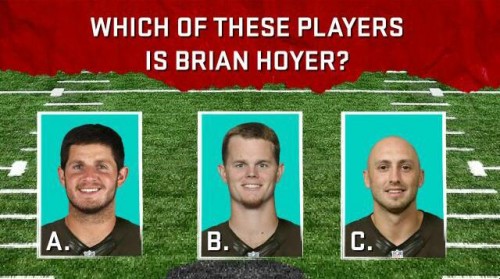 First of all, let me start by saying that this is a subject that has been on my mind for a minute. This past week in The 5th Quarter football podcast that I co-host with Cal Lee we discussed this very topic in our Pick 6 segment of the show. And since that conversation there has been even more madness at the QB position. Brandon Weeden, who lost his job two weeks ago due to injury/poor play to Brian Hoyer, got it back after Hoyer made a bad decision and didn’t get out of bounds resulting in a season ending ACL injury. And the Buffalo Bills, in the same game as the Hoyer injury, lost their rookie QB on the same type of play! Now his replacement, fellow rookie Jeff Tuel, is losing the job he just inherited… TO A GUY FROM THE PRACTICE SQUAD (more on that below)! The league’s view of quarterbacks and the guys who back them up have changed, and it is justified for us to take a look at the new way GMs look to field the position of the leader of the offense.

Lets take a look at who has been replaced by a back up so far this season: 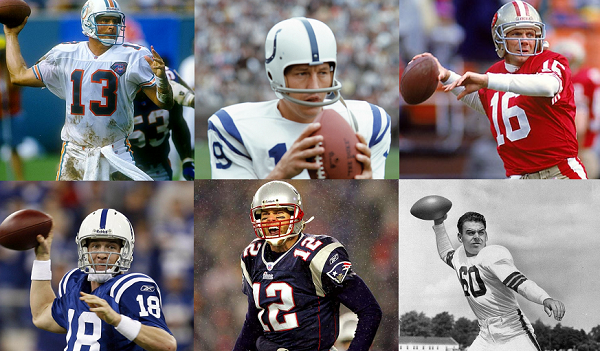 For years QBs commanded the most money on a team and were given highest priority when it came to order of player importance. This also meant that most teams would also try really hard to stock 1 or even 2 talented back ups just in case the starter went down. But the tide in the NFL is turning and it is turning for the cheaper youth movement.

Need proof of this?

A few years back it wouldn’t be uncommon for former starters in the NFL to stick as back ups in the league until very late in their 30s, eagerly awaiting an injury or poor play of the younger guys ahead of them to clear a path for one last shot at glory. Now that is not the case. Most of the backups are younger, more inexperienced and cheaper, than their starter counterparts. A guy like Vince Young, at 30 years old, is already considered washed up and without a job. Not to mention the widespread choice of most teams to turn to rookies and young, inexperienced guys to helm teams on the regular basis. With each young QB achieving success like a playoff birth (RG III, Luck, Kapernick, Wilson, Andy Dalton and Ponder all made the playoffs last year despite being either 1st or 2nd year players) and teams not paying 1st round picks unlimited money before they prove themselves teams are looking to give the young guys a shot. In my opinion there is a direct correlation between this and the amazing amount of injuries/failure to produce that is leading to so many backups seeing the field. Lets analyze these two reasons for a minute…

Injuries are the #1 reason a backup at any position sees the field in the NFL. But this is especially the case with QBs. Usually a healthy #1 QB on any team will be much more talented than their back up and have to play pretty bad for quite a while for a team to steer away from them for someone else (but we will get back to that shortly). So lets just take a look at the injury factor for a second. Out of the 32 NFL teams, 15 teams are starting a guy with 3 years or less total NFL experience at QB. Wow. Now lets talk about how this effects injuries. Playing QB at the NFL level is unlike anything else… it is not like college, semi pro, or the Canadian League. So you learn more and more from experience. Guys like Roethlisberger & Flacco started as rookies, but they were game managers who were learning on the job. They evolved into stars over time and learned from the limited roles they served in their first few years. But now guys like RG III, Russell Wilson and Andrew Luck are expected to be as well rounded and smart as their 8 and 9 year veteran counterparts… and they just aren’t. 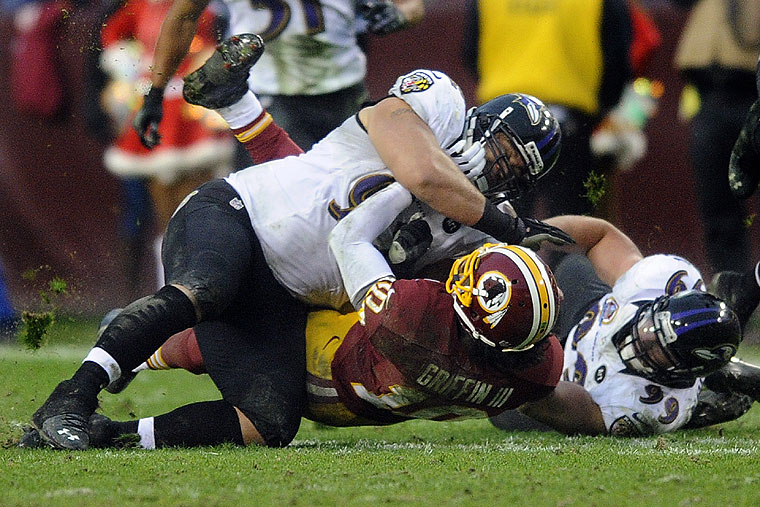 Young QBs make bonehead moves and often that could lead to an injury. EJ Manuel & Brian Hoyer should have ran out of bounds on the plays that cost them an injury. For Hoyer that injury cost him the season and maybe the job in Cleveland forever. What about RG III last year? His inability to know when to slide or go out of bounds directly contributed to the random play that he was hurt on, and so far he hasn’t looked the same this year on his surgically repaired knee. Truth is you can’t blame these young QBs… they just don’t have an understanding to how much faster the NFL game can be and how much more dangerous that makes it. So these youngin’s play wild and free… and often end up broken by the NFL defenders that are licking their chops at the inexperience on the other side of the line. More injuries happen… more backups see time. Which takes us to our second point… 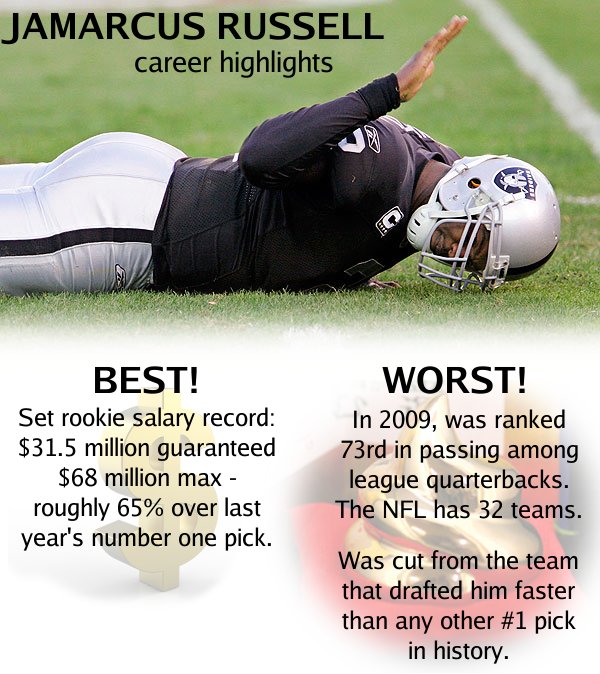 Not every young QB lights the league on fire and leads his team to the playoffs. For every Wilson, RG III and Luck there are Blaine Gabbert’s, Mark Sanchez’s, Alex Smith’s, Jamarcus Russell’s, Tim Tebow’s and Christian Ponder’s that never quite get over the hump. Hell…a lot of guys never even get to be mediocre. And teams are quick to give them the hook… much quicker than they used to be when they had paid their 1st round draft picks huge signing bonuses and guaranteed money. But the rookie wage scale now eliminates tying up money, and therefore years of mediocrity, in just about anybody no matter how highly touted they are. The last guys to cash in on the old scale were Matt Stafford and Sam Bradford. Stafford has been pretty solid up in Detroit and they have had flashes of a much better team than the 0-16 team that proceed him. But Bradford has not lived up to his potential and his Rams have not gotten much better during his tenure. If they weren’t locked into him for so much money, they would have easily cut ties with him and moved in another direction. But they almost can’t due to the salary cap hit. On the other hand, Brandon Weedon and Christian Ponder are two examples of a guys who is under the new rookie scale who is not performing and doesn’t cause his team financial distress if they cut ties with them. New rookie deals are for four years and for much less money, forcing players to perform young to earn any real money in the future. So teams are using high picks on QBs and are relatively free to go another way somewhere in the immediate future. And since the rookie salary scale applies to ALL draft picks, most of the backup roles are going to younger draft picks to free up more money for the star position players that are beyond the 4 year window. 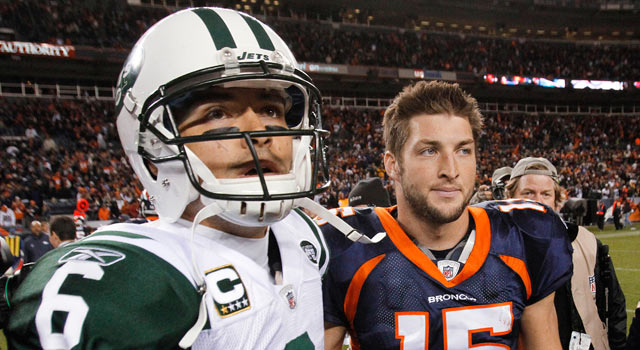 So the Bills can throw money at guys like Mario Williams and Stevie Johnson ($13 mil and $6 mil respectively) while paying star starting 3rd year running back C.J. Spiller & starting QB EJ Manuel relative peanuts ($3 mil and $1.5 mil respectively) due to the fact that they are in the first four years of their career. Backup QB Jeff Tuel, also a rookie, is making $400 grand… lol. And third string, veteran QB (at 29 with 6 years of NFL experience… HAHAHAHA) Kevin Kolb makes a whopping $2.5 million as he sits on IR. That’s three QBs with a combined 6 years of NFL experience (all from Kolb) making a total of $4.5 million dollars… or $18 million less than Aaron Rodgers makes per year by himself! Bradford makes $13 million per… and his cap hit would be $12.5 million. So the Rams would have to pay him $12.5 million to cut or trade him. That is why he still has a job. Josh Freeman was making $8 mil this year, and since he was released outright by the Bucs they had to pay him the full amount. But that 8 million dollar cap hit was easy enough for Tampa to absorb considering Freeman’s back up Mike Glennon is only making $700 thousand. So its easy for the Bucs to just say goodbye… and equally as easy for the Vikings to pick up Freeman to replace the struggling Christian Ponder. Freeman, having collected his Buc money, signs a 1 year deal for about $2.8 million with the Vikes, and sets the stage for them to toss aside Christian Ponder. Ponder only makes $1.4 million… a far cry from a guy producing similar to Bradford (in both stats and wins) who makes way less. So Ponder is easily moved aside and Freeman takes less money for an opportunity to start and earn a contract for the future (he is a free agent after this season). 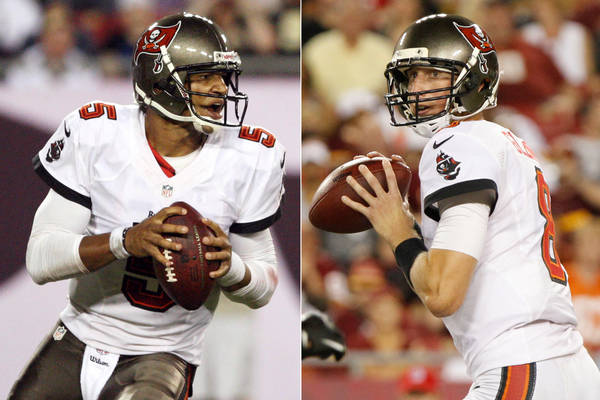 So what is the final analysis?

Since most of the starting QBs in the league are young & lacking experience and most of their backups are even younger and less experienced I expect the carousel to keep on turning. More teams will take shots at drafting young QBs since they may provide the team with a solid player on the cheap rather than giving a 5th or 7th year guy switching teams a high priced contract that might not deliver wins. And then those guys (like Mark Sanchez and Josh Freeman next year) will have to take far less to prove themselves again… if they even get the shot. Vince Young (my go to example of the state of affairs in the NFL) is a young 30 with a 31-19 career record as a starter, a championship pedigree on the collegiate level, and can’t even get a roster spot. The Bills would rather have a concussed Kevin Kolb on IR and a rookie backing up a rookie in favor of Jeff Tuel who was backing up EJ Manuel than to keep a guy like Young on their roster (Young was released before this season by the Bills and also by Green Bay later). And this week they will start their third QB of the year, practice squad player Thad Lewis, who has exactly ONE NFL START!!!! That is scary. 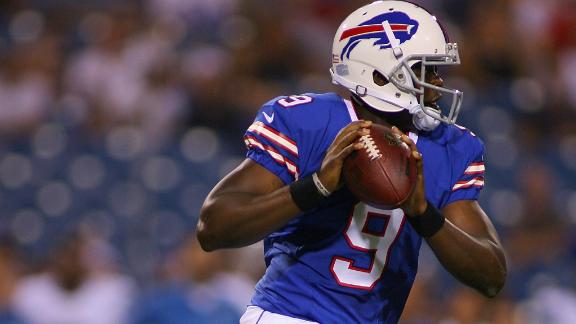 Welcome to the future of Quarterbacking in the NFL….