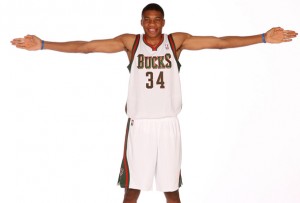 According to reports, the Milwaukee Bucks’ Giannis Antetokounmpo has a good chance of getting minutes at point guard this season. Nine-time All-Star and Hall of Fame point guard Gary Payton has been brought in a few times this summer by coach Jason Kidd to help mentor and prepare Giannis for this coming season. They both have had high praise and are looking forward to seeing him take on this new challenge. Last year, Giannis gave himself a ‘D minus’ when asked about his performance, although according to most standards he had a very nice rookie year. It’s obvious that he has very high goals for the future.

The thought of Antetokounmpo running the point is tantalizing. According to basketball-reference.com, there have only been five players in NBA history to average at least 6.8 ppg, 4.4 rpg, and 1.9 apg as a teenager: LeBron James, Carmelo Anthony, Tracy McGrady, Luol Deng, and…Antetokounmpo. Last year he was listed at 6’9″, but he’s since grown two inches and is at 6’11”. His measurements are off the charts and he can run down the court in two dribbles. They don’t call him the ‘Greek Freak’ for nothing. The Bucks have a lot to be excited about in his second year and if he can adapt to the point guard position, he would be a matchup nightmare for the opponent.

I hope they stick to this plan of playing him at point guard this upcoming season, but regardless of how it plays out, we could be looking at a perennial All-Star for years to come.