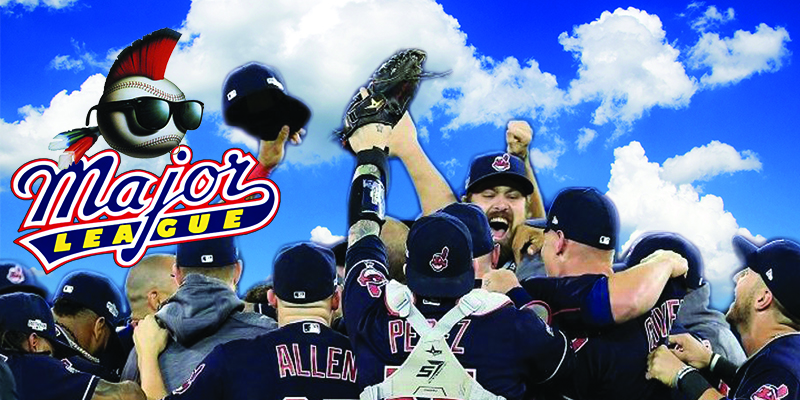 For those of you wondering if Cleveland still had a ball club Jake Taylor, from the movie “Major League”, has a simple answer for you. “Yup, we’ve got uniforms and everything, it’s really great!”

Well they have more than just uniforms–they have an American League pennant. This is a far cry from the Indians who were mired in a 33-year slump between 1960-1993 where they spent most of their days hanging out near the bottom of the standings. These Indians are giving Cleveland fans something to cheer about. They watched their basketball team take an NBA championship and now they’re watching their team on the diamond attempt the same feat.

The team has had a slew of injuries and really depends on some young unproven talent. Even Indian fans had to google “Who is Ryan Merritt?” Those factors has left many asking how they’ve managed to put up quality numbers throughout the season. But in almost every meaningful stat the Indians are trending towards the top in both batting and pitching. They have seen great contact hitting from both Jose Ramirez and Francisco Lindor who boast batting averages above .300. The power has been supplied in large part by Mike Napoli and Carlos Santana with 34 homers a piece.

Their outfield was full of questions to begin the year but they managed to survive with some unlikely names. Tyler Naquin lead the Indians outfield with an impressive .296 BA and Lonnie Chisenhall‘s strikeout to at bat ratio is something that would make every hitting coach proud. With that being said it would be unfair not to mention Rajai Davis‘ stolen bases. He was average with the bat hitting a little under .250 but almost doubling Cleveland’s second best base stealer this season and finishing 13 stolen bases better than anyone else in the AL.

With the unlikely production of the outfield and the next man up mentality of Cleveland’s pitching staff shown in the regular season it shouldn’t be a surprise how they’ve been able to scrap their way through these playoffs. Would you have believed me if I told you that the Indians would have the best 2016 postseason ERA number as a team and it really isn’t even close? The Indians are just clicking. Terry Francona seems to be finding his footing after his firing from Boston shocked baseball fans in 2011. Many people believed he still had too much value to not be an MLB manager and he’s proving those people correct. He’s fielded an unlikely team, with an unlikely pitching staff, with a very unlikely outfield rotation and he’s winning.

When you look at the numbers in the ALCS, other than the final scores, one would almost be certain that the Toronto Blue Jays took the series. They had more hits, better overall team batting average, and they used less pitchers. Usually winning those three stats would capture the series but on the contrary. Cleveland found away to get it done. Timely hitting, impressive pitching and a Cleveland versus the world mentality has propelled them to their first World Series since 1997. Many, including ESPN’s Cleveland native Mike Golich, thought they wouldn’t even get past the Red Sox. Yet here they are hoping to take home their first World Series championship since 1948.

While the Dodgers and Cubs battle, the Indians await their next challenge from either…and they probably won’t be favored when the World Series does roll around. They’ve faced adversity, silenced many critics and continue to impress. Embrace it people, Believeland will see another home team fight for a championship. Will this be a happily ever after? The fairy tale continues when the World Series begins on October 25.