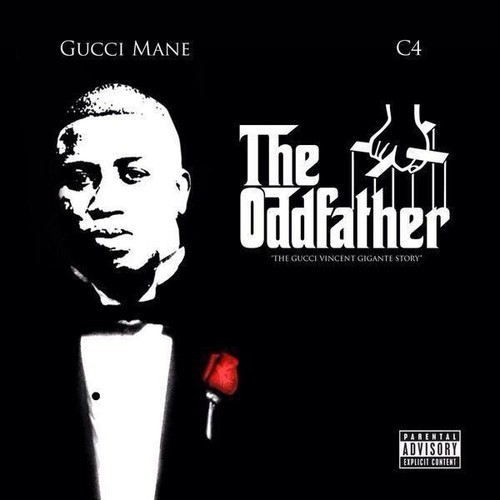 Gucci Mane is currently in prison until 2016 but that has not stopped him from being one of the most consistent rappers in the game. Although he is incarcerated, he has enough material to release three albums per year until 2016.

He released his Trap House 4 album this past month and his Brick Factory Vol. 1 mixtape in May along with collab projects with Migos and Young Thug.

The Oddfather is a continuation of the music Gucci always releases. It consists of hard flowing trap beats which features numerous artists he’s collaborated with over the past couple years such as Young Scooter, Brick Squad label mate OJ Da Juiceman, and Young Thug. Juiceman was featured on the trap banger “Kick Door” and was featured on a track with Gucci paying tribute to Redskins QB Robert Griffin III on “RGIII”. Scooter was featured on “Trap On Wheels ” and “That’s How We Rocking Remix”.

Gucci Mane has had his fair share of beef with many rappers and has kept his circle small as he’s stuck to collaborating with the same trap rappers he’s always had on his mixtapes. GuWop also put out tracks for the ladies on “Wednesday” and “Tore Up”. Gucci Mane also had 1017 Brick Squad label mate Pewee Long way on “Birdies.” Gucci, Young Dolph and Pewee Longway also recently dropped a collab album called “Felix Brothers.”

Gucci Mane’s hard hitting trap beats and consistency in releasing mixtapes and albums every month has fans craving for more. Being incarcerated has not stopped the East Atlanta native from delivering fans the music they want and will certainly keep his buzz flowing for a while until his release in 2016.