You are here: Home / Basketball / Heat and Hawks among teams in Carmelo Anthony Free Agent Race 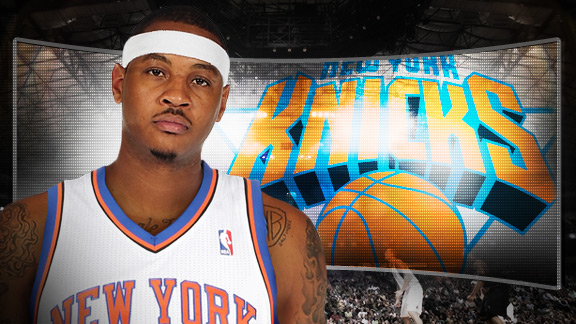 Carmelo Anthony opted out of his contract with the New York Knicks and is now an unrestricted free agent. Numerous teams have expressed interest in Anthony such as the Bulls, Rockets, Mavs and Lakers. The Miami Heat were the original front-runners for Melo and their interest has grown even stronger in light of their NBA Finals defeat.

Before the NBA Finals reached its end, speculation had already started about Anthony coming to Miami in free agency. For this to happen, the Heat’s big 3 would have to all take significant pay cuts. Anthony would also have to pass up $70 million on the table to join forces in Miami.

The Atlanta Hawks have also joined in on the conversation with their flexible cap space and supporting cast that could compliment Anthony. Atlanta has $19 million in cap space but would likely have to free up more to land Carmelo. Getting rid of Lou Williams’ $5 million contract would help in acquiring Anthony. This could also mean letting go of Elton Brand and Shelvin Mack. Among the Hawks’ other free agents are Mike Scott, Cartier Martin and Gustavo Ayon. Atlanta would most likely attempt to retain Scott after a phenomenal year in which he obtained more playing time and improved tremendously on his three-point shot. No matter how Atlanta makes more cap room for Anthony, a roster that consists of Jeff Teague, Kyle Korver, Carmelo Anthony, Paul Millsap and Al Horford is a team to be reckoned with. They could even warrant moderate title contender status depending on chemistry which is always a great unknown.

Anthony says he loves being a Knick but wants to explore his options in free agency. If Anthony were to resign with New York, he would receive a five-year max contract worth approximately $130 million. Money or a championship are his choices at this point in his career. A healthy Amar’e Stoudemire could help the Knicks tremendously in becoming a threat in the East, but he has been injury prone since he arrived in 2010. Stoudemire has already opted in to his contract with the Knicks. Therefore, he will be paid $23 million next season. This is ridiculous given his health problems and his contract is detrimental to the Knicks signing key free agents. All of that will be a factor who is seeking an opportunity to win while getting paid his worth as a star player.

It will be interesting to see where Anthony ends up. The Bulls have been in serious talks with Anthony and head coach Tom Thibodeau has already met with him about his upcoming free agency. The list of teams will increase and he is going to have a lot of money thrown his way.  But in the end, I believe he will choose the team with the right supporting cast and right coaches to lead him to his first NBA title.