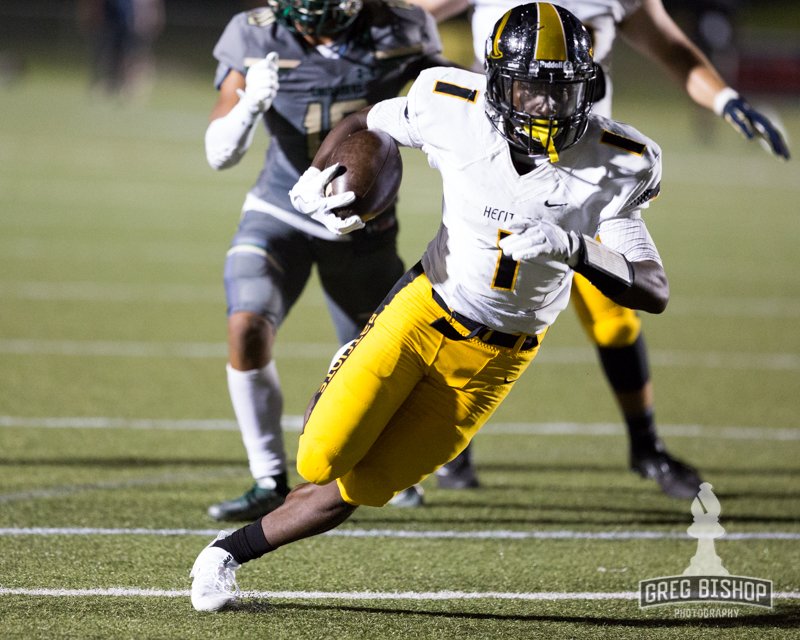 1. St. Thomas Aquinas (Fort Lauderdale) – The Raiders survived an epic showdown with national power St. John Bosco (California) Friday night with a 9-3 overtime win. The defense displayed how they truly can carry their team to victories by not allowing an offensive touchdown to the 5th ranked team in the nation according to USA Today. The offense however does need to find a high-level of consistency with new starting quarterback Curt Casteel if they want to contend for the national title. St. Thomas Aquinas, currently ranks 4th in the nation and will look to gain consistency against local opponent Piper at home this Friday night.

2. American Heritage (Plantation) – The Patriots proved once again how great Florida football is by traveling to play the number one ranked team out of Virginia according to MaxPreps and leaving victorious with a 14-7 win over Bishop Sullivan Catholic. The Patriots leaned on their strong defense which includes possibly the best cornerback tandem in the country in Patrick Surtain Jr. and Tyson Campbell. Heritage will take on another out of state opponent in that of the Liberty Patriots out of Nevada. Liberty ranks 21st in the nation and totally dismantled an out of state opponent of their own in Saguaro who currently ranks 5th in Arizona. Pro style quarterback Kenyon Oblad and Wide Receiver Marquez Williams will look to pull the upset in Plantation.

3. Miami Central – This program has built a program that simply just reloads. 2017 appears to be a year where the Rockets have done just that. Last week Central’s defense looked fierce once again playing an aggressive style against Chaminade-Madonna (Hollywood). In a 48-24 win over the 3A state champs, Central also unleashed a new stable of running backs lead by James Cook. Central will have their hands full against Booker T. Washington on Thursday night who also has something to prove this season.

4. Deerfield Beach – The resurgence of Deerfield Beach is clearly continuing from last season and none more evident than the 6-2 victory over the 6A champs Miami Carol City. The Bucks have a monster defensive line lead by Ashton Pierre that will look to continue their dominance traveling to out of state opponent St. Joseph Regional (New Jersey). The Green Knights from the northeast rank 20th in the nation according to Maxpreps but seem overmatched from the boys from South Florida. Three star Pittsburgh commit Nick Patti will try to keep this one competitive but look for this to be another display of how strong Florida football is compared to the rest of the nation.

5. Cardinal Gibbons (Fort Lauderdale) – The Chiefs of the north suprised us all with their dominating victory over the 8A champion Southridge Spartans 27-6 at Traz Powell Stadium in Miami. The balanced offense is a force to be reckoned with this season proving their strong showing from last season was far from a fluke. Gibbons nearly took down district foe American Heritage (Plantation) in last year’s playoffs and seem like a strong contender to dethrone the Patriots this year. The Junior quarterback Nick Scalzo and the Chiefs from Broward face the other American Heritage (Delray) from the north this Friday. Gibbons should have no trouble cruising to a victory.

6. Miami Northwestern – The Liberty City faithful should have plenty of optimism going into week 2 of the 2017 season. The Bulls cruised to a 47-0 victory over American in the opener and look strong as ever. Dual threat quarterback Chatarius “Tutu” Atwell lead a variety of playmakers that are reminiscent of the teams of the 90s and early 2000s. In a district that includes Miami Central, Miami Carol City and Miami Norland, Miami Northwestern will have no walk in the park this season with a schedule that also includes the juggernaut that is IMG Academy, and contenders like South Dade and Booker T. Washington. Columbus travels north from Westchester and will have their hands full with the mighty Bulls. Columbus walked all over Mater Academy Charter last week and we will see what Miami commit cornerback Josh Jobe and the Explorers are made of Friday night under the Traz Powell Stadium lights.

7. Booker T. Washington (Miami) – It has been an interesting ride thus far for the Tornadoes from Overtown. American Heritage (Plantation) avenged its loss from last year to Booker T. with a 42-27 victory. Their official week 1 matchup against the Dillard Panthers would see Washington emerge victorious with a 25-8 win. The Panthers only managed 21 total yards of offense. Booker T. Washington is considered one of the best teams in the nation just as every team on this list but their record at the end of the season may not reflect how great the Tornadoes truly are. Their schedule is brutal with no time to breathe. This week they face Miami Central. The Rockets routed the Washington last season 42-14. I expect this game to be much closer Thursday night.

8. Chaminade-Madonna (Hollywood) – This team is absolutely loaded with commits to major universities. Players include WR Xavier Williams Alabama commit, LB Shaun Shivers Auburn commit, G Sebastian Santerling USF commit and a trio of Kentucky commits in that of WR Marvin Alexander, DE Davoan Hawkins and ATH Akeem Hayes . The Lions were shredded on defense giving up 309 yards on the ground to Miami Central and will look to bounce back against Miramar. The Patriots are not as talent rich as previous years but are certainly no slouch and should be competitive with Chaminade-Madonna on their home field.

9. Miami Carol City – The boys from Miami Gardens surprisingly failed to score an offensive point in their opener against Deerfield Beach. Deerfield actually strategically took a safety in the 6-2 win so theoretically the Chiefs were shutout. This does not mean they are shut out of the top ten however because this is the same team that jumped out to a lead against IMG Academy in Bradenton in the prior week. The Ascenders would eventually pull away with the victory 41-22, but CC must have had at least a moral victory after how they played albeit a preseason game. Carol City has a bye week this week so they will have an extra week to figure out what went wrong against Deerfield Beach. The 6A defending champion Chiefs play Columbus at Tropical Park September 9th.

10. South Dade – The team from Homestead made a statement in the opener against Coral Gables with a 26-18 win. Tackle John Lockee anchors a solid offensive line for the Buccaneers. D.J Ivey and Jamal Anderson solidify an impressive defensive backfield that should contend for the 8A state title. South Dade should have no problems with local foe Southwest or much of the rest of their schedule. Other teams should be much concerned with this team come playoff time.