You are here: Home / Basketball / Football / I’ll Boo Whenever I Want 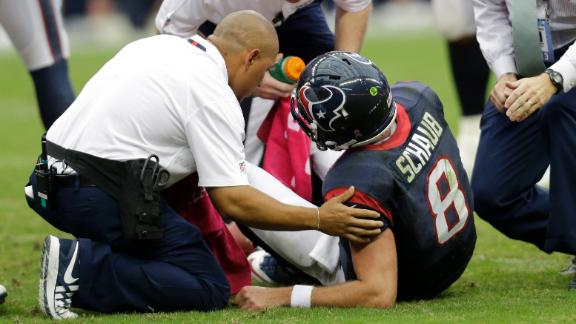 I’m not sure how often someone actually takes the time to write something that they had seen while watching Fox Sports Live—since it’s still a relatively new network I’m going to assume that there are not many—but I think it is finally time to take a stance.

I have to preface this rant with the fact that I love the new Fox Sports 1 network and everything they do, including what just set me off.

As an avid sports fan, I find myself dissecting many different aspects of the game; both on and off the field. Recently, something that has provoked a lot of debate, both on television and on talk-radio, is the injury Matt Schaub picked up and the cheers that followed. Brian Cushing called the fans who cheered “barbaric” and I will not disagree with that because as a fan of any game, not just football, we have to understand the amount of hard work, dedication, blood, sweat, and tears that go into making a run at glory. Brian Cushing, I agree, it is barbaric.

Having said that, that is where the sympathy and agreement ends. Why? I’ll tell you why.

Today, on Fox Sports Live during the “Players Only” segment, the panel of talking heads lead by Donovan McNabb decided to continue to harp on this issue and proceeded to give someone such as myself a reason to boo the shit out of them whether they are healthy, hurt, or otherwise. McNabb said towards the end of the segment that cheering for someone being hurt is wrong—still in agreement—but then to finish his point he went on a rant about how his father, wife and kids were in the crowd and that isn’t right to do that because we, as the fans, have to be more considerate of the person outside the game. He then went on to say (forgive me I am trying to quote him from memory), “…would you want me to come inside your place of business and cheer when you get hit upside the head with a burger?”

This is why fans continue to not give a shit about player feelings and will boo and cheer whoever the hell they want when they way. There is an absolute disassociation between the player and the fan with an unjustifiable double standard being held by the athlete. The player, in this case McNabb, wants fans to worship the players and understand that they are people with families too, but then don’t care about who the fan is because the go to move for athletes when they get their feelings hurt is to call all of the fans burger flippers; LeBron James did it too.

If we are supposed to care about the person you are then how about trying a little harder to understand the people you are asking to care for you and your feelings. None of us have been handed multi-million dollar contracts for playing a game. Football, in this case, provides the grocery clerk, the customer service representative, the car salesman, the mechanic, the CEO, the garbage man, and why not, even the employee at McDonalds, an opportunity to escape reality and cheer for something that they are just as emotionally involved in. Remember that, Donovan, when you get in your car that was probably made in a bankrupt city like Detroit. Remember that some people are flipping burgers because in this economy, it is the only thing some people can do to survive. The entire city of Detroit could have benefitted from one of your contracts that you certainly didn’t live up to.

You deserved to be booed for underachieving and throwing up during the biggest moment of your life on national television. Respect the average individual and what they go through in their personal lives just to have a chance to watch their favorite team play. We all work hard but just because you’re a millionaire for playing a game, don’t think for a second that you are better than us. Just because we aren’t allowed on the practice field doesn’t mean we flip burgers for a living and lastly, just like just because you were paid an absurd amount of money to play a game doesn’t mean you were actually any good.