You are here: Home / Basketball / Injuries to Spurs, Timberwolves leave the playoffs open in the West 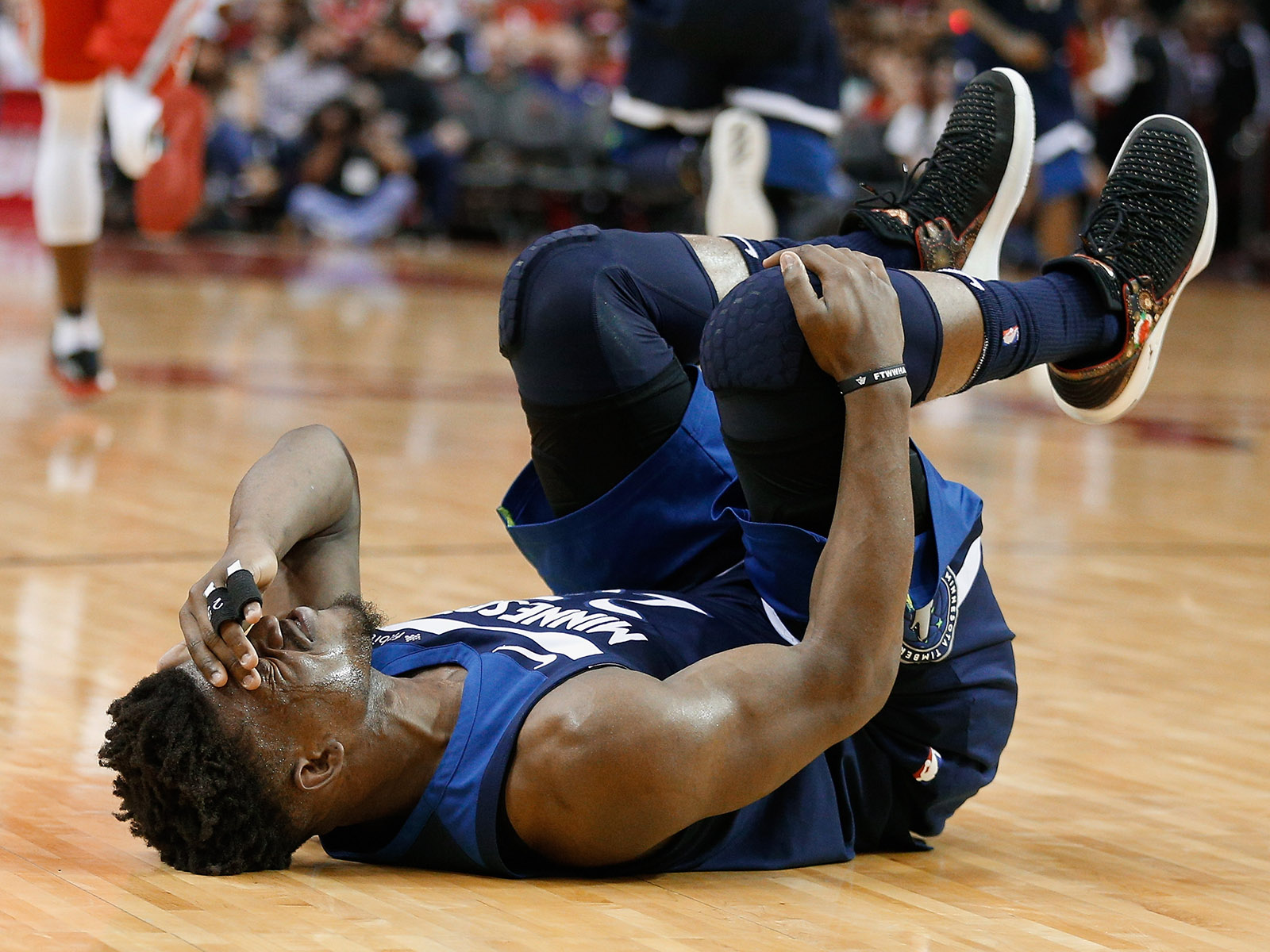 Let’s set the record straight. No one is touching the Houston Rockets and Golden State Warriors right now. As the top two teams in the NBA, the Rockets and Warriors are creating their own definitions of historic.

For the Rockets, continuing to shoot 42.6 3-pointers per game this season will edge out the only other team to average over 40 attempts per night: the 2016-17 Rockets. In the Bay Area, the Warriors are making history by piling up Ws for the fourth straight season. Since Steve Kerr took the helm, no team has swept the Warriors in the regular season.

Those two teams aside, the Western Conference is in rocky waters. Over the last week speculation has arisen over the nature of Kawhi Leonard and the San Antonio Spurs’ relationship, just as the Minnesota Timberwolves lost All-Star Jimmy Butler for four-to-six weeks with an meniscus tear in his right knee.

Jimmy Butler is expected to undergo surgery in coming days and could return within 4-to-6 weeks, league sources tell Yahoo. Final timetable will be set after procedure.

With the Spurs and Timberwolves holding third and fourth place in the West, the opportunity is ripe for a late-season playoff push. Currently, the 10th place Utah Jazz are just 4.5 games behind the Spurs. In other words, teams currently seeded five through 10 are just a win streak away from hopping into home court advantage in the playoffs. While few teams have the capabilities to dethrone the Rockets or Warriors in the playoffs, here’s a look at the teams that need to take advantage of the standings chaos.

Almost a year removed from losing franchise player Gordon Hayward in free agency, the Jazz are vying for relevance with another young standout. Donovan Mitchell’s rookie-leading 19.7 points per game, combined with Rudy Gobert’s return from injury, made for a stellar 11 game win streak through the end of January. Though the Jazz lost about 15 points per game with Joe Johnson’s departure and Thabo Sefolosha’s season ending surgery and had their win streak snapped after the All-Star break, coach Quinn Snyder has, at the very least, the capabilities to lead the Jazz into the eighth seed.

The good news for Utah is that the loss of Johnson and Rodney Hood has potentially sealed some of their defensive holes. With Johnson and Hood on the court the Jazz’s had two of their weakest defensive links, posting ratings of 107.2 and 106.8 respectively. Outmatched on the perimeter, sending Johnson and Hood to greener pastures should allow the Jazz to focus on shoring up the paint behind the long arms of Gobert without getting destroyed on the wings. To this point of the season, the Jazz were top-10 in the league in opponents shooting percentage from beyond the arc, both at the top of the key (36.5%) and from the left corner (40.4%).

The better news is that the Jazz own the league’s second easiest schedule, according to ESPN’s calculations. Games remain, however, against the Warriors (2), Timberwolves (2) as well as the Spurs, Los Angeles Clippers, and Portland Trail Blazers, all of whom will be vying to keep Utah out of reach. The road ahead will be tough, but a renewed focus on defense could be the impetus to take the Jazz to a second straight post-season appearance.

Playing up to their potential has been a difficulty for the Thunder this year. Holding victories over the Warriors, Rockets and Spurs, the Thunder have fallen victim to the lottery-bound Phoenix Suns, Orlando Magic, and Dallas Mavericks. Despite beefing up the roster with a new “big three” of Carmelo Anthony, Paul George and Russell Westbrook, finding consistency this season has been a year long struggle, and the fifth place Thunder sit at 34-27, just a game and a half ahead of the ninth place Los Angeles Clippers.

At face value, a lot would have to go wrong for the Thunder to fall out of playoff contention. Even without Anthony Roberson for the remainder of the season, the Thunder’s starting five has a combined 26 playoff appearances. In the NBA, experience is invaluable, and simply making the playoffs should be an easy feat for the Thunder over the last 21 games of the season.

Climbing the standings is another story. After Paul George managed only five points against the Warriors this past Saturday, it became clear that all of Oklahoma City’s moving parts need to be tuned to perfection to be effective. Despite holding the Warriors to 54 points through the first half, George’s lack of scoring erased any defensive effort the Thunder had organized, allowing the Warriors to finish the game with a 22-point victory.

While the Thunder should capitalize on the potential disarray created by the Spurs and Timberwolves losing their best players, the rest of the season will be an uphill battle. Despite owning a relatively weaker schedule than the Timberwolves, the Thunder have 14 of their remaining 21 games against teams over .500. Hungry to prove that the George-Anthony experiment can produce results, the Thunder have to ensure that George’s streak of single digit performances ends at one.

If any player has a massive chip on his shoulder, it’s Portland’s Damian Lillard. Between being passed over for All-Star games, and All-NBA teams, Lillard has steadily kept Portland in playoff appearances. In the Western Conference, the Trail Blazers are joined by the Rockets, Warriors, Spurs, Clippers and Memphis Grizzlies as the only teams to have playoff berths in every season since 2014.

Consistently among the top eight teams in the West, the Blazers have only had home court advantage twice in the last four playoffs, and even then only advanced as far as the conference semifinals. Currently on a three-game win streak, the Blazers have the chance to extend it in crucial games against their Northwest division rival Timberwolves and Thunder in the next week. A win over the Timberwolves would tie the season series at two apiece, giving Portland hope in the event of a tiebreaker situation. Taking just one of the remaining two contests against the Thunder would also be fortuitous, securing the tiebreaker in favor of Portland.

A top-10 squad in defensive rating, the Blazers’ biggest strength is rim defense. Allowing a league low 55.9 percent within the restricted area, the Blazers also eat up 44.9 boards each night, good enough for sixth in the association. Still so much of the Blazers’ offense relies on top-tier nights from Lillard and CJ McCollum that any roster volatility over the next few weeks could send the team spiraling out of fifth place and out of the playoffs.

While a bailout from a buyout signing could be a quick fix to give provide offensive firepower heading into April, coach Terry Stotts needs to figure out how to best utilize his current pieces, namely Jusuf Nurkic in tandem with his superstars. Nurkic has the offensive game to compliment an inside-out approach, but too often loses focus and can’t keep a consistent level of scoring.

Exhibit A: following a 24-point performance in a win over the Charlotte Hornets, Nurkic was held to six and zero points over the next two games. Such was the case throughout the season; intersect a 20-plus-point game with a few duds and you have Nurkic’s occasionally effective average of 14 points per game.

Unfortunately, the sixth toughest schedule in the league stands between the Blazers and overtaking the fourth and possibly third spot in the West. For Lillard and the Blazers, the motivation to win is certainly there, but making turning home court advantage into a reality will take more than some elbow grease.

Keeping pace with young, upstart Timberwolves and historically talented Spurs will ultimately be a tough feat regardless of the names on the injured list. Still, jumping into the upper half of the standings and securing home court advantage could be the difference between seeing the second round and booking an early vacation.