You are here: Home / Basketball / Is the Los Angeles Clippers’ success here to stay? 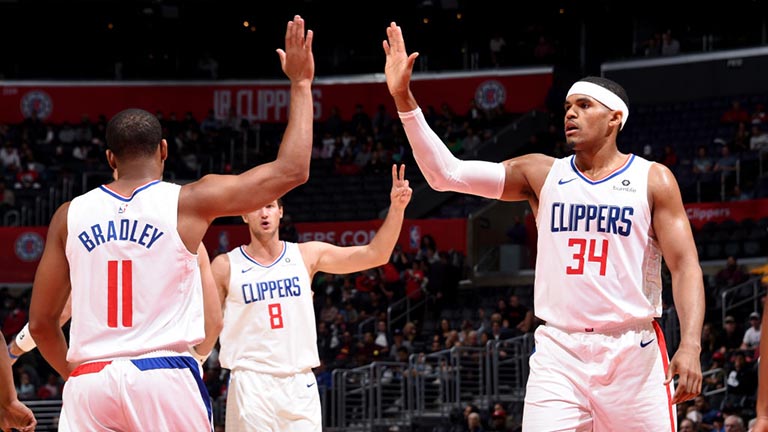 By all accounts, the Los Angeles Clippers should have lost to the Sacramento Kings Thursday night. For the Clippers, the game was the second of a back to back—24 hours prior to that game’s tip-off the Clippers were protecting Staples Center against the Western Conference-worst Phoenix Suns. It was also against a new-look Kings team, one that prides itself on running teams out of the gym behind the efforts of sophomore point guard De’Aaron Fox.

But Los Angeles’ current hot streak proved too much. Doc Rivers and the Clippers secured their fourth straight win, pushing their record to 15-6  and to the top of the Western Conference standings. Through the first 21 games of the season the Clippers have shimmied their way up the standings, past teams with Hall of Fame talent, championship-laden resumes, and weighty chips on their shoulders.

And not even their coach knows how far they’ll go. “I think we have a lot of improvements [left to make], I really do,” Rivers said after Wednesday’s win over Phoenix. “We have guys that haven’t played together much or are coming back. I like our team and we’re going to get better. How good? I’ll let you know later.”

Rivers knows to skirt the line of talking about exactly how good this team will be. Without an All-Star among its ranks, this iteration of the Clippers is arguably the least talented bunch of players Rivers has coached since 2006-07, when he led a shiftless Celtics team to the second-worst record in franchise history, including a record-setting 18 game losing streak.

Since then, Rivers has only commanded teams with a firmly established basketball nucleus. First, it was the 2007-08 Celtics, who proved the talent of a super team can overpower questions about said team’s age. Then, his first four seasons with the Clippers were built around another trio of All-Stars that, with the right supporting cast, could have challenged any team in the West had it not been for Golden State and James Harden’s astronomic rise to prevalence. In both situations, Rivers’ most accomplished teams were led by devious, pass-first guards (Rajon Rondo and Chris Paul) who had a cluster of targets to prioritize and a handful of spark plugs off the bench.

This year’s Clippers are in direct contrast to Rivers’ usual team composition. No one on the team averages more than 4.2 assists—oddly enough, known point generator Lou Williams leads the team despite averaging more than four assists only twice before in his career. Furthermore, the Clippers are resorting to hot-swappable lineups. Though Marcin Gortat is the usual suspect at center, the 6-foot-8 Montrezl Harrell fills in during small ball rotations, not unlike the role of Serge Ibaka in Toronto.

In fact, Harrell is one of the Clippers most interesting case studies. Whereas Ibaka is heralded for being comfortable enough beyond the arc to thin out defenses for the Raptors, Harrell plays like a traditional 7-foot center despite his relative height disadvantage. Harrell rarely picks and pops—he hasn’t so much as attempted a 3 all season. 94 percent of his buckets come within 10 feet of the basket per NBA.com, a mark better suited to centers like befitting Hassan Whiteside or Jusuf Nurkic.

But with their best Harrell-based lineup on the floor, Los Angeles is shooting 62 percent from 3 on 85 attempts. His influence then, comes from rolling off screens and creating space for shooters like Mike Scott.

Here, Harrell poses enough of a threat to draw the attention of Eric Gordon and PJ Tucker. Clint Capela gets entranced by Shai Gilgeous-Alexander, leaving Scott free and clear to let one rip.

Again, Harrell doesn’t need to be the direct screener for Scott to succeed. Breaking for the bucket with Williams, Harrell binds Austin Rivers and Otto Porter Jr., which leaves Scott in the clear once again.

And when he’s not creating diversions Harrell is powering through the paint and finishing above the rim. In 26 minutes per game this season Harrell has earned six double-doubles, including his first two 20-point 10-rebound games of his career.

Harrell isn’t the Clippers only bright spot. Collectively, the Clippers are also embracing the blessing of good health after the 2017-18 campaign. After missing all but 11 games last season, Patrick Beverley has returned as a vocal and physical leader in Los Angeles. Danilo Gallinari has also made his way back to the court. His injury-riddled history culminated in just 21 appearances last season, a mark he has nearly eclipsed this season.

Admittedly, Gallinari is having the better season of the two returnees. Beverley’s averages are down from his last healthy season, though that has made room for Gilgeous-Alexander to take over. The rookie has started the Clippers’ last 12 games during which the team fostered a 10-2 record; what Gilgeous-Alexander lacks in 3-point confidence he makes up for with a decent handle that gets him and the rest of the Clippers into the paint. Los Angeles is seventh in paint field goal attempts per game and second in shooting percentage on those shots.

The same qualities that lend themselves to Gilgeous-Alexander’s success are helping Gallinari and Tobias Harris. The Clippers’ starting forwards have the length to score from anywhere—both are having career years in terms of 3-point percentage. Harris has the added benefit of shooting 52 percent overall, a stat that has seen improvement thanks to his willingness to abuse mismatches in the post.

The Clippers are capitalizing on a multi-faceted game plan that succeeds on the break and in the half court. Staving off Harrell, Harris or Boban Marjanovic in the post leaves the perimeter ripe with opportunity for Gallinari, Williams or Scott. And when it comes time for Gilgeous-Alexander to lead the break, he has a myriad of finishers to pitch to.

As teams like the Miami Heat, Minnesota Timberwolves and Brooklyn Nets are trying to find ways to win without a superstar, the Clippers are solving that puzzle. Los Angeles is taking advantage of an egalitarian system in which each player has identified his specialty and can fill his role without question.

Rivers and the Clippers might not know how far this team will go but their recipe for success shouldn’t go stale anytime soon.