You are here: Home / Basketball / Jason Kidd immortalized as a Nets great 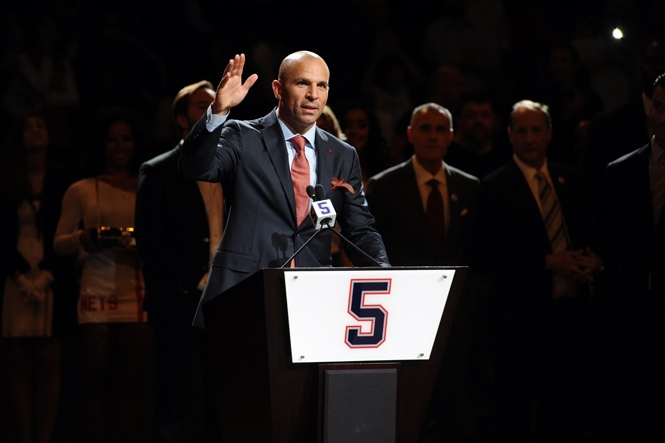 Jason Kidd’s legacy in the NBA screams Hall of Fame. He is all time great and New Jersey Nets legend despite never bringing the city a title in two NBA Finals appearances. The Nets, now in Brooklyn, decided to pay homage to their legend now turned head coach by retiring his jersey.

Kidd refused to allow the ceremony to take place during the regular season as to not take away from his team’s focus (or his own) when the games really matter. Thus his famous number 5 was retired before a “meaningless” preseason game against the Miami Heat.

Check out some of the clips of the ceremony here via BrooklynNets.com:

Kidd’s Wikipedia page scrolls for seemingly hours full of accomplishments and milestones. Here is an excerpt:

On April 16, 2008, Kidd reached a new career milestone, achieving his 100th career triple-double in the final regular-season game with the Dallas Mavericks that year against the New Orleans Hornets. In the 2008–09 season, Kidd became just the fourth player in NBA history to reach the 10,000 assist milestone and is now the only player in NBA history with 15,000 points, 10,000 assists and 7,000 rebounds. On April 5, 2009, Kidd passed Magic Johnson at third on the all-time assist list in a convincing 140–116 victory over the Phoenix Suns. Kidd scored 19 points with 6–8 shooting and a season high 20 assists, giving him a total of 10,142 career assists. On November 26, 2009, Kidd moved into 2nd place on the all-time assists list in a win against the Houston Rockets, surpassing Mark Jackson on the list. On February 20, 2012, Kidd passed Michael Jordan on the all-time steals list to become number 2 behind John Stockton.[29] On February 8, 2013, Kidd broke the 12,000 career assist mark as a New York Knick vs. the Minnesota Timberwolves in Minneapolis, Minnesota. He reached 12,000 on a pass to J.R. Smith for an elbow 3- pointer. The Knicks eventually won that game 100-94.[30] In 2013, Kidd became the first player to win back-to-back NBA sportsmanship awards.[31]

Congratulations Mr. Kidd you are truly a class act.