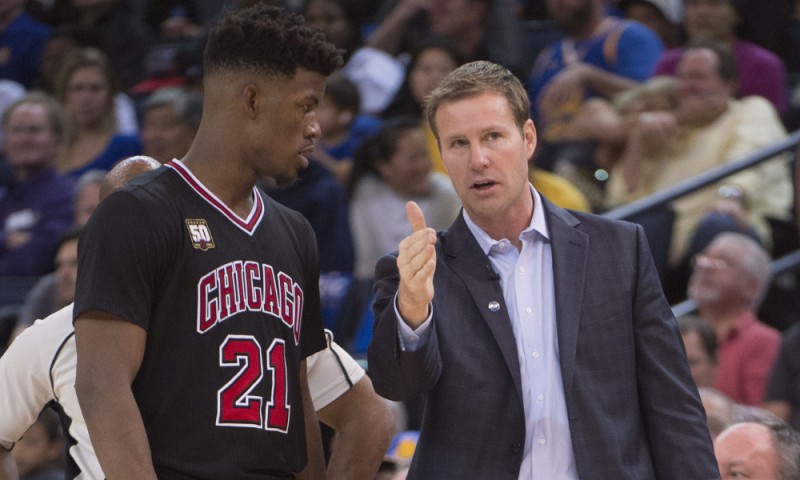 Jimmy Butler is the newest headline when it comes to players in trade rumors. The Bulls are allegedly entertaining thoughts of trading their all-star swingman despite signing him to a five-year max contract last summer.

But why would the Bulls trade Butler?

He has been a hard-worker for the organization and but may have reached his peak in Chicago. This year he has averaged a career high in points and assists. He has put the team on his back many games scoring over 20 points in 31 games, over 30 points in 7 games, over 40 points twice and one a of over 50!

The 6-7 guard out of Marquette is a two-way player who came in the top three for defensive player of the year last season. His overall offensive game and defensive capability have made Butler a coveted player in the NBA.

A possible reason to trade a player of this caliber could be due to a shaky relationship. After a December game, Butler made it clear that rookie head coach Fred Hoiberg was not coaching as hard as it took to win. That coupled with the Bulls’ late season swoon and struggle to make the playoffs has questions surfacing about the team’s future. Recently both Bulter and Hoiberg have spoken on the situation. Butler said,” To tell you the truth, I don’t pay attention to the rumors.” Butler also said that “I do not plan on going anywhere.” He wants to stay. He goes onto say how that since the incident their relationship has grown, and they now have a very sturdy ground.

Hoiberg commented further,”But again, I don’t read a lot right now. I think Jimmy and I have a really good relationship right now. I’ve been communicating a lot with him.” This does not seem like something that either one of them are worried about. Superstar and head coach are saying the right things and seem like an understanding has long since been reached. Therefore, why would the Bulls want to trade Butler?

Your guess is as good as mine!